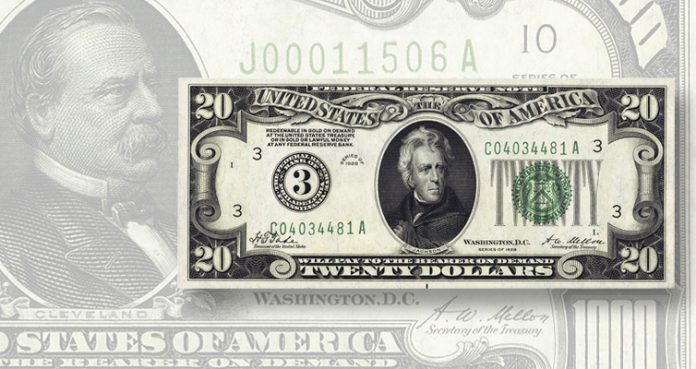 She discovered a letter from Treasury Secretary Andrew Mellon, dated Oct. 28, 1927 in the National Archives. It was a memo that he had written to him, recommending subjects for the soon-to-be introduced small-sized United States paper currency.

Proposals for $1, $2 and $5 bills, as well as $10,000 bills, were exactly the same as what was printed on the notes on July 10, 1929. Other denominations are marked with pencil handwriting changes. The original $20 note had Grover Cleveland’s portrait printed on it. This is replaced by a hand-written note directing Andrew Jackson to appear on the $20 denomination. The $1,000 note has Jackson’s name crossed out and is replaced by that of Cleveland.

Only one change was made to the backs. The $100 note has “Independence Hall” written in and “Bureau of Engraving and Printing”.

Former historian at the Bureau of Engraving and Printing Dr. Franklin Noll has seen public records that offer greater insight into this memorandum and the history of small-sized notes development in general.

Alvin W. Hall was the BEP Director and wrote the memo. He held that position from 1924 until 1954. Hall gave the memo to an assistant secretary who then gave it to Mellon. According to Mellon, the handwritten notes are Mellon’s.

Noll claims that although Series 1928 issued the first small-sized notes, and the 1927 memo was very late, the decision to move to smaller notes was made in good faith. It all started in the days prior to World War I. Concepts were kicked around by Treasury officials but never acted on until the Mellon years.

The short-lived Bureau of Efficiency was established in 1916. It was the first executive branch staff agency. According to Mordecai Lee in Institutionalizing Congress & the Presidency: U.S. Bureau of Efficiency 1916-1933, it was charged with applying scientific management principles to the federal government.

Hall was one of its employees. Hall, a young accountant, was made an investigator in 1920 by the bureau. In 1922, he was assigned to a Mellon-established committee to review the BEP’s operations. One thing led to the next. At 36 years old, he was elected head of the BEP’s planning section and was made director in 1924.

Noll describes the new money as being rooted in a rational approach. There were many meetings, many ideas and many discussions. The first was that the most prominent persons should be on lower denominations to be instantly recognized; (2) they should become presidents if they are possible; (3) if the denominations are lined up side by side, the portraits should look significantly different. Portraits should be oriented in a way that is most appropriate for the person being photographed.

Original proposal by the Bureau of Efficiency was for George Washington to appear in $1 notes, Woodrow Wilson in the $2 denomination and Thomas Jefferson and Abraham Lincoln in the lower denominations. Alexander Hamilton, who was the first secretary to the Treasury, was supposed to appear on one of these higher denominations. This didn’t happen.

Mellon had many other factors to take into consideration, possibly in the name efficiency. The BEP was printing Series 1914 Federal Reserve Notes in large sizes at the time and had all the plates. Instead of trying to reinvent the wheel, why not use as many portraits as possible? Jackson was changed from the $10 to the $20 notes, Cleveland from the $20 and the $1,000 notes, and Hamilton from Hamilton’s $1,000 denomination to the $10. Based on a painting of Joseph-Siffred Duplessis and Benjamin Franklin, the new portrait fits better with the style than the one on large-sized $100 notes. It was felt that portraits with three quarters facing were more difficult to replicate than profiles.

Chief Justice John Marshall was replaced by a bust of President Wilson on the 500 notes. The $1 and $2 United States notes were used to bust Jefferson and Washington.

Hall didn’t make an ego trip to suggest that the Bureau of Engraving and Printing building should be used for the $100 denomination. Benjamin Franklin was, in fact, a printer.

It is not known why Mellon made these changes to the memo.