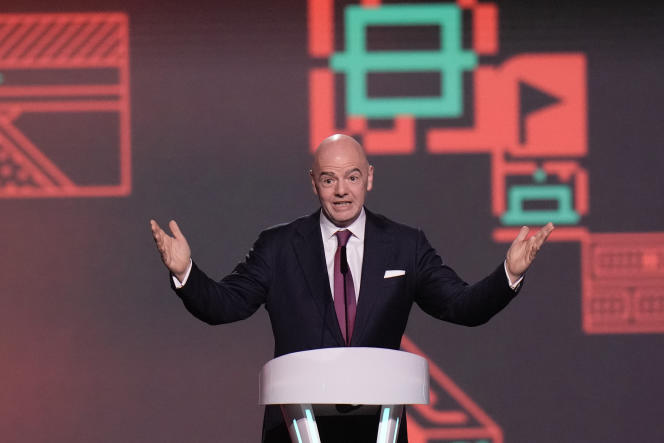 Six months before the FIFA World Cup in Qatar (November 21-December 18), the NGO Amnesty International released a report on Thursday, May 19, on “human rights” violations suffered by “several hundred thousand” construction workers in the emirate.

This 62-page document, which Le Monde consulted, lists the “responsibilities”, over a decade, of the International Football Federation (FIFA) in these “multiple abuses and serious and generalized violations of labor rights”: “payments of exorbitant and illegal recruitment fees not reimbursed”, “scams by abusive employers”, “excessive hours”, “forced labor”, “deaths which were rarely investigated” and did not result in compensation for the families of the victims.

“By awarding the World Cup to Qatar [on December 2, 2010] without enacting conditions or safeguards to enhance labor law protections, and subsequently failing to properly prevent or mitigate violations of human rights, FIFA has contributed to a wide range of labor rights abuses that were preventable and foreseeable (…) and paved the way for further violations”, affirms Amnesty International which carried out its report on the basis, in particular, documents from FIFA, the Qatari organizing committee of the 2022 World Cup, and other international bodies, such as the UN or the International Labor Organization (ILO).

FIFA accused of having discarded

The NGO recalls that the “choice” of Qatar in 2010 was “highly controversial due to allegations of corruption, extreme heat and its disastrous human rights record”. “Risks to workers were not even taken into account during the host country selection process” and did not feature in FIFA’s assessment report, when “health risks” relating to “extreme heat have been taken into account for “players, spectators, officials and the FIFA family.” »

While the kafala system, which placed migrant workers under guardianship, remained in force in Qatar “until the end of 2018” and despite the “advances”, the NGO accuses FIFA of not having “either prevented or mitigated the risk of workplace abuse in the years following the awarding of the World Cup. »

She criticizes him for having waited until 2020 to set out “his responsibilities precisely in the context” of the 2022 World Cup “through a long-term sustainable development strategy” and for not having, for a long time, “publicly accepted any responsibility in the situation of migrant workers in the country”. “The measures taken proved to be too late and limited”, considers the NGO.

“For years, FIFA has taken a hands-off approach and relied heavily on the Organizing Committee to carry out its due diligence,” the NGO laments.

To illustrate this “deeply problematic approach”, she cites as an example the case, in 2020, of “one hundred employees of Qatar Meta Coats, a design and construction company subcontracting the work of the Al Bayt stadium, which did not haven’t been paid for nearly seven months. “. “While the Organizing Committee had been aware of this matter for almost a year, FIFA only became aware after being informed by Amnesty International. »

Call to fund “a reparations program”

According to the NGO, despite recent labor reforms launched in the emirate, “structural problems persist” and “thousands of workers still face abuse and exploitation”.

“Just reimbursing the costs of illegally recruiting hundreds of thousands of workers, for example, will cost hundreds of millions of dollars,” Amnesty International said. Qatar, FIFA, the organizing committee and other actors, including companies, all have the responsibility, independently of each other, to contribute financially to a reparations programme. »

In its report, the NGO recommends the creation by FIFA of a “compensation fund” for workers or the families of injured, injured or dead workers in Qatar. It invites the International Federation – endowed with a reserve of 1.6 billion dollars – to feed it with an “amount which is not less” than the bonuses (440 million dollars) paid by the body to the teams participating in the World Cup and to “invest in programs to ensure that violations are not repeated in the future. »

Avoid “risky” countries in the future

“Qatar, which is one of the richest countries in the world per capita and has a sovereign wealth fund of over $450 billion, must ensure that any program providing reparations to workers who were at the heart of its flagship project, as well as to all those who have suffered violations unrelated to the World Cup, “says the NGO.

“The 2022 World Cup will be far from exemplary in terms of preventing harm, concludes Amnesty International, but if all workers who have suffered violations during the preparation, organization and implementation of its flagship event perceive adequate reparation, it can, despite everything, represent a turning point in FIFA’s commitment to respect for human rights. »

Finally, Amnesty International urges FIFA not to award the World Cup to a country in the future, if “identified risks cannot be avoided”, with regard to “violations of workers’ rights, forced evictions, discrimination, restriction of freedom of expression and financial corruption”. While FIFA sent a written response on May 6 to the NGO, neither the Qatari government nor the Qatari organizing committee responded.

Contacted by Le Monde, FIFA ensures “to implement an unprecedented due diligence process with regard to the protection of workers involved in the 2022 World Cup in accordance with FIFA’s responsibility under the United Nations’ guiding principles relating to business and human rights. »

FIFA “welcomes the fact that Amnesty International and the other signatories of the report also recognize the progress made” and specifies that, “when companies working within the framework of the FIFA World Cup do not respect their obligations, the FIFA and the Organizing Committee ensure that the harm is repaired by the entity that caused the impact. »

“As part of the Organizing Committee’s efforts to secure reimbursement of recruitment costs, for example, workers received payments totaling $22.6 million in December 2021, and contractors have pledged to pay an additional $5.7 million,” FIFA said.