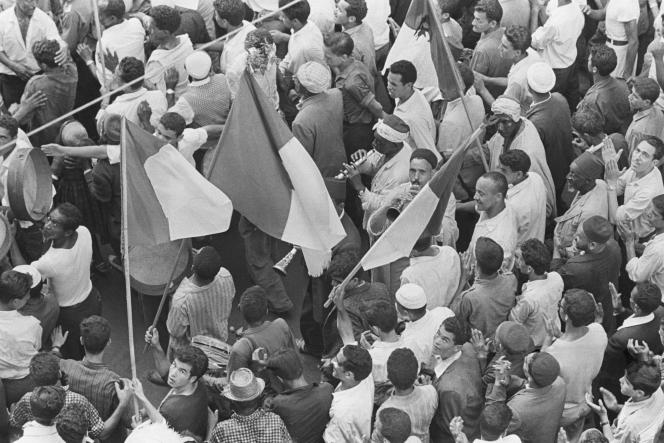 This passing of the torch, Mohamed Batache has been waiting for it for sixty years. His patience will finally be rewarded under the night sky of Tipaza, a coastal city located nearly 70 kilometers west of Algiers. The troupe of young musicians, whom he has recruited and trained, is invited to take part in the parade through the streets of the ancient Roman city on Monday, July 4, which kicks off the celebrations of the 60th anniversary of the accession from Algeria to independence.

For weeks, the orchestra, affiliated with the scouts of Cherchell and awarded the prize for the second best brass band in the country, has been rehearsing the military songs chosen by the teacher. “The succession is assured”, smiles Mohamed Batache, with the satisfaction of a job well done.

He was almost their age when he took part in the festivities organized during the proclamation of the country’s independence. At the forefront, like his students today. The operation had been mounted in the greatest secrecy by officers of the National Liberation Army (ALN), as Algerians went to the polls for the referendum on self-determination, held on July 1, 1962.

At the time, Mohamed Batache attended the National Conservatory of Music in Cherchell where he learned to play the saxophone. “We were asked to prepare for a parade. We boarded a bus without knowing where we were going. We barely had time to pack a bag, ”recalls the youngest of the band, who had just celebrated his fifteenth birthday.

“Celebrating the victory over colonialism”

The training takes place in the headquarters of wilaya IV, a regiment of the revolutionary army, suspended on the steep slopes of the Tell Atlas. The conditions are rudimentary, the discipline iron. Under a heat to melt the asphalt, the budding musicians with their instruments go back and forth at the head of a procession in which the guerrillas, in tight order, learn to walk in step. “It was all new to them. They’ve never done that before,” says the band’s saxophonist.

After three days of rehearsal, on the morning of July 3, they begin an unforgettable tour. First Médéa, then Blida. At each stopover, a jubilant crowd, which shattered the shackles and constraints imposed by a long colonial domination. “Tahia El Djazaïr”, “Istiklal”… The cries tearing the air still echo in the ears of the concert performer. “We were staying with families. The welcome was warm. It was a moment of communion and reunion,” recalls Mohamed Batache.

Sitting next to him, Amal, his daughter, rocked by this story since childhood, talks about this moment as if she had experienced it herself. “People did not wait until July 5 to celebrate the victory over colonialism. They came out spontaneously in the streets long before because they couldn’t take it anymore. They wanted to let their joy explode,” says the 44-year-old aquaculture trainer, employed at the Cherchell fishing school.

In the family living room, where a national emblem sits on a sideboard, we never tire of hearing the patriarch recount the day of July 5, 1962. “When we arrived in Algiers in the morning, there were already all the people outside. . It was impressive, we could not count them. We marched from the Place du 1er mai to Bab-El-Oued. Our marching band led the way. Behind us, impeccably aligned rows of soldiers,” recalls Mohamed Batache.

“Why all the way to Bab-El-Oued?” Because it was a very red-light district, a lot of black feet lived there and the OAS [Secret Army Organization] was based there. It was a way of marking the occasion,” he continues.

The last stage of the tour was also the most solemn. Under the midday sun in Sidi Fredj, as the flag with green and white stripes is hoisted, the Cherchell brass band sings Kassaman in front of a compact crowd and an audience of officials and foreign journalists. Played clandestinely on the radio until then, the Algerian national anthem resounded for the first time.

“During colonization, we were forbidden to play Kassaman. As we knew music theory, we learned by ourselves to play it by deciphering the notes, “says the musician, whose grandfather, involved in the resistance, was shot in 1957 near Bab-El-Gherb , an ancient gate erected in the center of Cherchell.

The choice of Sidi Fredj, on the western outskirts of the capital, was not insignificant. “It was a symbol since it is from there that the French settlers landed on July 5, 1830. When I participated in the parade, I did not know the symbolic significance of this place, it is only much more late that I understood, “says Mohamed Batache.

His participation in this little-known piece of history is a source of pride for his family. Especially since only two members of this military band are still alive. “He feels an even greater responsibility to pass on his story, which is part of the big story,” says his daughter. We are proud of the mark he left. He may not have been a Mujahid or a Chahid, but he participated in his own way in the struggle for independence. »

In the commemorative effervescence that takes hold of Algeria every July 5, the story of the first military band has been forgotten until now. There is no image of the procession left. Only the vivid memories of the two survivors. It’s fixed. For the first time, on the occasion of the sixtieth anniversary of independence, the band of the revolutionary army will be honored by the wilaya of Cherchell. “It is important because the Algerian people have the right to know how the July 5th happened in detail. Our memories also belong to him,” said Mohamed Batache.

In his family, the transmission of memory remains a serious matter. Even for the youngest. “I question him often, we can talk about the past for hours.” Sometimes I take notes so I don’t forget. It gives me strength,” says his 17-year-old grandson Hamza, who wants to take care of this “precious heritage. Independence, we were not given it, we had to snatch it. It allows us today to feel like masters in our own house, to be able to decide by and for ourselves”.

Amal, his mother, agrees: “When I look up and see the national flag, I say to myself fortunately that we won our independence because it allowed me to study and to have a position of responsibility. . Otherwise, surely, I would not have gone very far in school and I would have ended up working for a settler as a simple worker. Independence gave us back our pride, our dignity and the possibility of emancipation. »

At the dawn of Algeria’s 60th anniversary, the family does not only stare into the rearview mirror of history. She also reflects on the future of the young nation. Biggest challenge? Restore intergenerational dialogue, responds bluntly Mohamed Batache. In particular the relationship of trust between the elites in power and the new generation, shaken by a series of political and financial scandals.

In a country where one in two inhabitants is under the age of 30, young people find it difficult to find their place, confronted with the heavy weight of the revolution, a blurred horizon and a malaise that sticks to their skin. Pushing a growing number to leave their native land. Sometimes at the risk of their lives.

“We meet people who have crossed the sea without papers and have been turned away. Some even sold their business to go to Europe. They leave without a plan, it’s sad,” says Amal. As a true witness, Mohamed Batache has only one wish: “You have to listen to young people and make them feel listened to. Only in this way can we move forward and continue the construction of the country. »