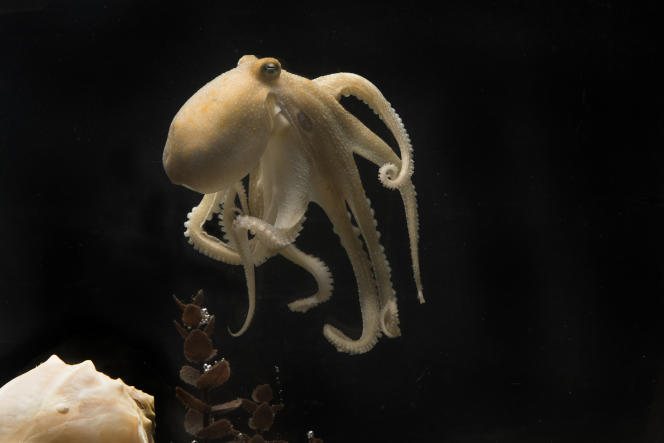 On the list of intelligence, cephalopods hold a unique place, almost equal to great apes, marine mammals and other crows or parrots. We know the ability of octopuses to use their suction cups to open jars from the inside. But, more broadly, the researchers who work daily on these creatures with small brains but with intelligence distributed in their tentacles describe beings who are clever, skilful, facetious, endowed with a memory and a rare capacity for learning.

However, this is not their only scientific interest. For nearly forty years, the death of females has confronted researchers with a thick mystery. Around the age of 1 year, they mate, lay eggs, place their eggs on a cord that they attach to the wall of their stony refuge. Then their ordeal begins. They stop eating, lose their colors, their muscles, their sight. They injure themselves, permanently entangle their arms when they are not self-harming. Finally, they die before the birth of their young.

Threat to the species

The seat of this sad behavior was known: the two so-called “optic” glands, more or less the equivalent of our pituitary gland. Experiments had shown that their removal interrupted this fatal drift. The mothers abandoned their eggs, resumed the hunt, fed and even offered a new reproduction. So why this planned suicide? And by what intermediary?

To the first question, scientists are still guessing. The main hypothesis is that the survivors would cannibalize the eggs of their congeners. This threatens the survival of the species. Coherent, but still to be demonstrated.

As for the second, a study published May 12 in Current Biology points to a culprit: cholesterol and its synthesis. The team of Z. Yan Wang, assistant professor of biology and psychology at the University of Washington, Seattle (USA), used mass spectrography to analyze the production of the famous optic glands (which have nothing to do with vision but are located near the eyes) in California two-spotted octopuses. Comparing specimens that had just spawned with non-breeding females, she unsurprisingly found in the former an increase in maternal hormones – pregnenolone and progesterone. But she also discovered an intermediate product of bile, and especially 7-dehydrocholesterol (7-DHC), a precursor steroid of cholesterol.

This 7-DHC is found in all vertebrates. For humans, the hormone allows the production of essential vitamin D and cholesterol. Because if this cholesterol synthesis is lacking, as in the rare hereditary Smith-Lemli-Opitz syndrome, heavy intellectual delays and self-destructive behavioral disorders occur. For the Seattle team, there lies the main culprit of cephalopod drift.

“In humans as in octopuses, we observe the association between a high level of 7-DHC and lethal toxicity, underlines the researcher. It’s quite fascinating when you know the genetic distance between our two species. »

“It confirms one of the hypotheses on the origin of the Smith-Lemli-Opitz syndrome and it reminds us how any abnormality in the synthesis of cholesterol can be deleterious”, adds Eric Bruckert, head of the department of endocrinology and prevention of cardiovascular diseases at the Pitié-Salpêtrière hospital.

Z. Yan Wang now intends to tackle Octopus chierchiae, a small striped octopus that does not know this deadly postpartum madness. What does her optic glands produce and how does she avoid her cousin’s tragic fate? Barely an answer, already two questions. So goes science.

Find all our articles on zoology, here