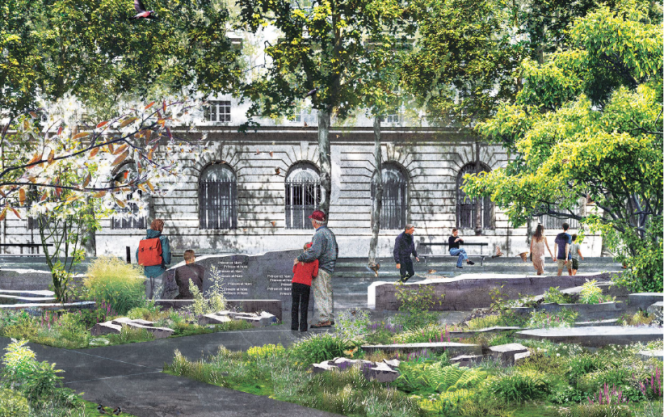 The time of memory, after that of justice. This is the horizon for the direct and indirect victims of the Islamist attacks of November 13, 2015, which left 130 dead and more than 350 injured. Six and a half years after the night of horror at the Bataclan, on the Parisian terraces and at the Stade de France, the National Anti-Terrorist Prosecutor’s Office completed, Friday, June 10, its marathon indictment started on Wednesday. The verdict is expected on June 29, after nine months of an extraordinary trial.

At the same time, the City of Paris is preparing the creation of a place of memory. A “garden of remembrance”, located on Place Saint-Gervais (4th arrondissement), just behind the Town Hall. The project presented by the Parisian agency Wagon Landscaping was chosen unanimously, Thursday, June 9, by a jury bringing together elected officials from the capital and representatives of the two victims’ associations, 13onze15 and Life for Paris. The objective is to inaugurate it for the tenth anniversary of the attacks, in November 2025.

“Creating this garden is a way of saying to the victims: ‘Don’t be afraid of being forgotten any longer,’ comments Arthur Dénouveaux, a Bataclan survivor who chairs the Life for Paris association. A specific place of remembrance will exist. Victims will no longer have to bear the burden of memory alone. They can more easily move on to the next step. »

In 2019, on the fourth anniversary of the terrorist attacks, the Council of Paris unanimously agreed to create a “garden of remembrance”. The precise location and project remained to be defined. Several locations have been considered, particularly in the 16th arrondissement near the ring road, and at the Père-Lachaise cemetery. Place Saint-Gervais was finally chosen. “It is a site in the heart of Paris, near the town hall, which will allow survivors and bereaved families, Parisians and tourists to gather,” notes Arthur Dénouveaux.

The small trapezoidal square in front of the Saint-Gervais church is now used as a parking lot, sometimes also as a demonstration site for all those who want to be heard by the town hall. To make it a memorial place, a call for tenders was launched, with two constraints: transform this very mineral site into a garden, respect a maximum budget of 3 million euros.

Five files were reviewed. The winning project aims to create a kind of “soothing oasis” on site. Cars will no longer be able to travel between rue de Lobau and rue François-Miron. The elm planted and replanted here since the Middle Ages will obviously be preserved. It has long earned the name of “carrefour de l’Orme” in this old place, and the current tree, which dates from 1935, received in 2005 the label “remarkable tree of France”. Given the presence of an underground car park, the planned garden cannot however be in the ground.

“From the outside, this garden surrounded by stones will be perceived as a monument, describes Mathieu Gontier, the co-founder of Wagon Landscaping. Inside, it will be a planted, calm place in which you can walk. Steles will symbolize each of the six places affected by the attacks, like so many pieces of a puzzle. The names of the victims will appear there. The landscape architect also intends to develop the site in such a way as to accommodate birds, “symbols of the soaring soul”. “There will be water, plants, a way to show that life goes on,” said Philippe Duperron, president of 13onze15, whose son did not survive the Bataclan massacre.

Work should begin without delay, in particular to ensure the waterproofing of the slab located above the car park. They will have to stop in the spring of 2024, like many others, so that traffic will be fluid at the time of the Summer Olympics. They will then resume, so that this place of memory common to all the victims of the 2015 attacks can host a first ceremony on November 13, 2025.