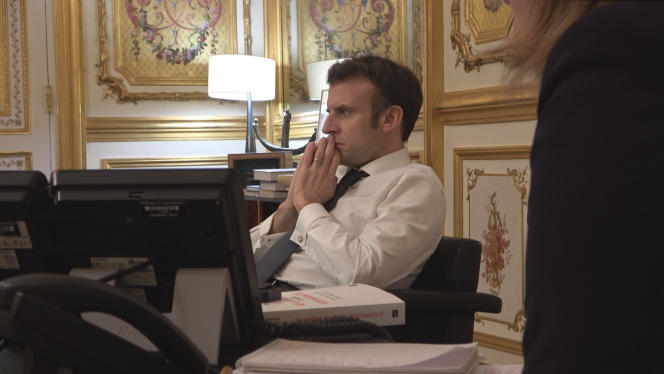 It was to be a documentary on the functioning of the Europe of Twenty-Seven under the French presidency. Filming began in January. At the time, we still arrived in kyiv by plane and the Ukrainian president received at the Mariinsky Palace, his ceremonial residence. On February 2, the images attest, Emmanuel Macron is “obsessed” that a “slip” will “irreversibly” commit Russia to war, but on the 23rd, at 9:30 p.m., on the telephone, Volodymyr Zelensky almost reassures him: “We keep our cool. »

The next day, journalist Guy Lagache changes films. Moscow has begun the invasion of Ukraine. From the initial pedagogical project, only one meeting of the European Council in Brussels remains: the one meeting extraordinarily, on the night of February 24 to 25. Former presenter of the magazine “Capital” (M6), Lagache, embedded in the diplomatic cell of the Elysée with his small iPhone and his camcorder, no longer lets go of his subject: French diplomacy in the face of the war which is shaking Europe, as before 1945.

We suspected it, the film confirms it: the “diplo” pole of the Elysee Palace leads the dance. Exit the “Quai”: in one hundred and fifteen minutes, we only see once the Minister for Europe and Foreign Affairs, Jean-Yves Le Drian. Unknown to the general public, the hero of the film is called Emmanuel Bonne, head of the diplomatic cell of the Elysée. Constraints imposed on directors sometimes give rise to nice finds: it is from his office that Lagache follows – at the level of diplomats – the phone calls of the president. Like this conversation of one hour and forty-five minutes, on February 20, with Vladimir Putin, where Emmanuel Macron wrongly believes that he has extracted from the Russian president the “principle” of a meeting in Geneva with Joe Biden – one of the highlights of this fascinating film:

“I don’t know where your lawyer learned the law [to] say that, in a sovereign country, the texts of laws are proposed by separatist groups and not by democratically elected authorities, attacks Macron.

“[The Ukrainian government] is not democratically elected,” Putin retorts, suddenly changing his tone. They came to power in a bloody coup. There were people burned alive, it was a bloodbath. And Zelensky is one of those responsible, adds the Russian president (probably a reference to the fire in a building in Odessa in which 42 pro-Russian activists were killed in 2014.) The proposals exist, the separatists, as you call them, transmitted them to the Ukrainians but they received no response.

Then, a few moments later:

– As soon as we hang up, I will study [the French proposals for a meeting between Russians and Americans]. But from the very beginning it was necessary to put pressure on the Ukrainians, but nobody wanted to do that.

“But if I do my best to push them, you know it. (…) But I need you to help me a little. I really called Zelensky yesterday to calm down. I will tell him again, calm everyone down, calm down on social networks, calm down the Ukrainian armed forces (…) Do not give in to provocations.

– Thank you Emmanuel. I always have a lot of fun talking to you because we are in a relationship of trust (…) To be honest with you, I wanted to go play ice hockey. There, I’m talking to you from the gym, ”says Putin before hanging up.

When, four days later, the missiles attack kyiv and Bonne tries to reach Yuri Ushakov, the Kremlin’s diplomatic adviser’s cell phone rings four times. Sigh: “They have the nerve to wage war, but not the courage to speak out.” »

At the end of the line follow one another “Olaf” (Scholz), “Mario” (Draghi), “Boris” (Johnson), “Volodymyr” (some first names are sometimes pronounced with a touch of condescension). Are these interlocutors aware that they are being filmed? “The question is to be asked at the Elysée,” replies Lagache, who manages to capture this somewhat unreal sequence, where, a fortnight before the war, French diplomats wrest from Zelensky the memorandum of understanding for a contract of one billion euros to enable Alstom to renovate Ukrainian railways. Never lose the north.

A few regrets: for a month, Emmanuel Macron is absent from the film, due to the presidential campaign and the choice of the director. We miss, suddenly, the criticisms of the Polish leaders or of Draghi himself on the “telephonite” of the French president. And the sulking – the anger, even – of Zelensky after the famous “we must not humiliate Russia”, repeated several times. “I was talking about the outcome, the end”, justifies the president facing the camera, in the train which brings him back from kyiv, on June 16. It was necessary to respond to a “little Anglo-Saxon music” speaking of “annihilating Russia”, he adds without mea culpa.