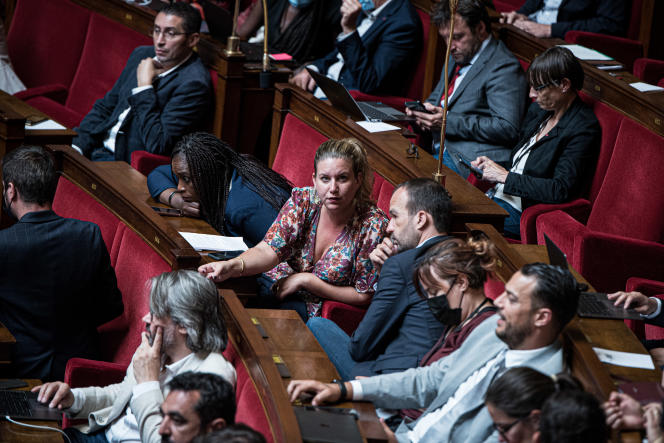 The political commemorations organized for the 80th anniversary of the Vél’d’Hiv roundup, on Saturday 16 and Sunday 17 July, were the site of a political confrontation, a few hours before a speech by the President of the Republic, Emmanuel Macron, in a new place of memory installed in the station of Pithiviers (Loiret), from where left eight convoys for the concentration camp of Auschwitz-Birkenau.

A message posted on Twitter on Saturday by the deputy La France insoumise of Val-de-Marne, Mathilde Panot, sparked a volley of indignant reactions in the presidential camp as well as from a certain part of the left and within the New People’s Ecological and Social Union (Nupes).

“Eighty years ago, the collaborationists of the Vichy regime organized the Vél’d’Hiv roundup. Do not forget these crimes, today more than ever, with a President of the Republic who honors Pétain and 89 RN deputies, ”wrote on Twitter on Saturday, the president of the LFI parliamentary group in the National Assembly.

A statement by Emmanuel Macron in 2018

The chosen one refers to a sentence pronounced by Emmanuel Macron in 2018, on the occasion of the centenary of the end of the First World War. As part of a long memorial tour in several towns marked by war, the Head of State had spoken out in favor of Philippe Pétain being honoured, like the other Marshals of France at the time, during the ceremony of the 11-November celebrating the Armistice at the Invalides, in Paris.

“Marshal Pétain was a great soldier during the First World War, it is a reality of our country. It is also what makes political life, like human nature, sometimes more complex than one might think. You can have been a great soldier in the First World War and have led to disastrous choices during the second, “said Mr. Macron, when questioned about this choice by the press.

“I have always opposed French defeatism when it could exist, complacency with any ideology. You can’t blame me for being ambiguous on this point: I have always been absolute in this fight,” the President of the Republic immediately clarified. But the impression given, despite multiple denials, of a balance granted between two of the periods of the life of Philippe Pétain had triggered many political criticisms. Hugely popular after his role played between 1914 and 1918, the soldier had fallen deeply into disgrace after his trial in 1945 and his death sentence for his active role in collaboration with the Nazi regime. The work of historians carried out in the following decades reinforced this latter image in public opinion.

Before him, General de Gaulle, Valérie Giscard d’Estaing, François Mitterand and Jacques Chirac had marked, each in their own way, a difference in the way Marshal Pétain was viewed according to these two eras, without however materializing it during a official event. The Elysée had finally backtracked, in 2018, by removing Philippe Pétain from the program of the November 11 ceremony. The Vichy leader was not celebrated there by name and the wreath laying only concerned the five marshals buried at the Invalides.

“Beyond Shame. We dare not believe it”

Following Mathilde Panot’s message, the Minister responsible for transport, Clément Beaune, called on the MP to withdraw her tweet and to “apologize to France, quickly”. “Beyond Shame. We dare not believe it, ”he reacted on the same social network. ” What a shame ! “, “Nausea”, “No limit in indecency”, reacted again respectively the ministers Agnès Firmin Le Bodo, Isabelle Rome and Olivier Dussopt.

“I hurt my France (…) who knows how to name anti-Semitism and fight it; who does not confuse everything, does not confuse destinies; who remembers, transmits, without instrumentalizing, in the dignity of unity ”, commented, on the left, the president of the regional council of Occitanie, Carole Delga. “When one is legitimately offended by risky and insulting equivalences, one refrains oneself from yielding to them. So in the same way as LFI≠RN, Macron≠Pétain”, also noted the deputy of Essonne, Jérôme Guedj, member of Nupes.

On Sunday afternoon, Emmanuel Macron will deliver a speech that is intended to be “offensive” against anti-Semitism, which “still lurks and sometimes insidiously”, which is “very worrying”, an adviser from the Elysée Palace announced to the press. ‘France Media Agency. According to the same source, the Head of State will also denounce “historical revisionism”, in particular on the role of Marshal Pétain during the Second World War.

Palais des Glaces: at Christian, in Strasbourg, the passion for rare...

News Editor - July 17, 2022 0
On the first floor of a 16th century Strasbourg house, the rustle of cosmopolitan conversations animates the room of one of the Christian pastries,...

Why the decline of the middle classes is a powerful lever...

“A President of the Republic who honors Pétain”: Mathilde Panot divides...