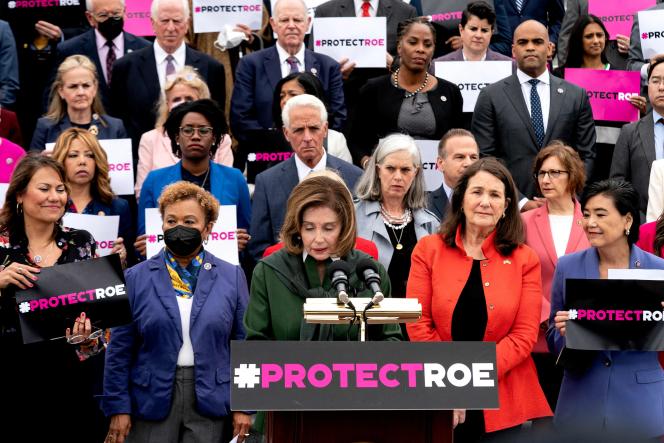 “Don’t touch our bodies!” “: Gathered in numbers on the steps of the American Congress, facing the Supreme Court which could soon cancel the right to abortion, the elected Democrats called this Friday, May 13 America to the mobilization. “We won’t stop fighting until everyone, and I mean everyone, has access to safe and legal abortions, regardless of income, zip code or ethnicity,” promised Barbara Lee, Democratic Representative, who has in the past publicly discussed her own clandestine abortion.

If the Supreme Court were to annul the case law which has founded the right to abortion in the United States since 1973, each American state would be free to prohibit or authorize it as it sees fit. Twenty conservative states have already promised to make it illegal, some even in cases of rape or incest.

“How can you tell a 12-year-old girl in Alabama who is a victim of incest that she can’t get the care she deserves? “, lambasted the elected Diana DeGette, who co-chairs the pro-abortion group in the House of Representatives.

Without the Supreme Court, the options for protecting this right federally are slim. The Chamber did vote last fall for a law guaranteeing access to abortion throughout the country. But this text does not manage for the moment to pass the stage of the Senate, where the Democrats have only a very narrow majority.

Anxious to weigh in on the debate, several major progressive organizations have called on Americans to march en masse on May 14 across the United States. Four major marches are held in Washington, New York, Chicago and Los Angeles, and hundreds of rallies across the rest of the country. “Americans are protesting and speaking out,” House Speaker Nancy Pelosi said.