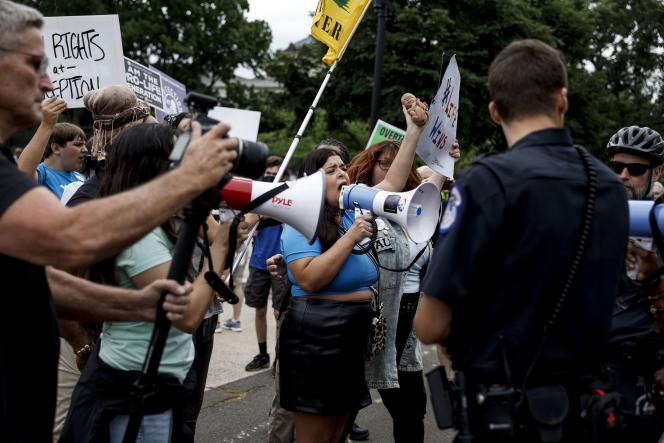 The nine judges of the Supreme Court of the United States voted, Friday, June 24, a text reconsidering the decision known as Roe vs Wade (1973), cornerstone of the right to abortion and the freedom of women to dispose of their body across the country. Each State will thus have the possibility of adopting its own legislation and therefore of possibly deciding to make voluntary termination of pregnancy (abortion) illegal.

A dozen States had already adopted legislation of this nature, which were only awaiting a final decision from the Court in this regard. The annulment of Roe v. Wade constitutes a significant setback for women’s rights in the world’s leading economic power.

The American decision, however, goes rather against developments in the world on this subject. Over the past two decades, more than fifty countries have adopted less restrictive laws on abortion, sometimes recognizing its essential role in protecting the life, health and human rights of women, notes the Center for Human Rights. reproduction and Amnesty International.

But the right to abortion remains largely unequal. While one in four pregnancies ends in abortion each year, globally more than 40% of women of childbearing age live in states with restrictive laws.

Abortion is still prohibited in nearly twenty countries, particularly in many African nations – including Egypt, Senegal, Gabon, Madagascar and Mauritania.

On the South American continent, access to abortion is particularly difficult. Abortion is not allowed in Suriname, Nicaragua or El Salvador. The latter state even adopted draconian legislation in 1998 which provides for penalties of up to eight years in prison in the event of termination of pregnancy. Prosecutions are also usually initiated for “aggravated homicides”, punishable by up to fifty years in prison.

In Europe, the total ban remains an exception. But in Malta, women who abort risk a sentence ranging from eighteen months to three years in prison. Abortion is also prohibited in the two micro-states of Andorra and the Vatican.

Other countries have legalized abortion but subject its access to extremely restrictive conditions. Thus, abortion is accessible only in the event of danger to the woman’s life in Côte d’Ivoire, Libya, Uganda, South Sudan, Iraq, Lebanon, Syria, Afghanistan, Yemen, Bangladesh, Burma, Sri Lanka, Guatemala, Paraguay or even Venezuela.

In Brazil, abortion is only authorized in cases of rape, risk to the mother or serious malformation of the fetus. In Asia, South Korea’s highest court ordered the lifting of the abortion ban in 2019, deemed unconstitutional. However, no new legislation has yet come to regulate the termination of pregnancy.

Finally, if abortion is authorized up to twelve weeks of pregnancy in Italy, in practice it is very inaccessible. The fault in particular with the conscientious objection. According to the latest figures from the Ministry of Health, 67% of Italian gynecologists refused, in 2019, to perform an abortion. This figure even rises to 80% in five of the twenty Italian regions.

In some states, access to abortion has only been guaranteed for a very short time. In Ireland, abortion has only been legal since 2018, following a historic referendum repealing its constitutional ban. Abortion was also liberalized in 2019 in Northern Ireland, the only part of the United Kingdom where it was still prohibited, but still remains difficult to access.

Colombia legalized abortion in February 2022, for any reason and up to twenty-four weeks of pregnancy. In the process, Chile decided on March 16 to include the decriminalization of abortion in the draft new Constitution. Finally, in Mexico, a landmark Supreme Court ruling declared the September abortion ban unconstitutional.

On the African continent, Benin legalized abortion in the fall. At the request of the pregnant woman, abortion is now possible up to twelve weeks “when the pregnancy is likely to aggravate or cause a situation of material, educational, professional or moral distress”, stipulates the law relating to sexual and reproductive health. Nearly 200 women died each year in Benin from abortion complications, according to government figures.

In South America, Honduras, which already prohibited abortion including in cases of rape or incest, serious malformation of the fetus or when the life or health of the mother was threatened, approved in January 2021 a reform constitutional law which further toughens the legislation.

Article 67 of the revised Constitution now stipulates that any termination of pregnancy “by the mother or by a third party” is “prohibited and illegal”, but above all that this clause “can only be reformed by a majority of three quarters of the members of Parliament”.

On the European continent, the right to abortion is not fully acquired either. In October 2020, the Constitutional Court of Poland thus made abortion almost illegal by removing the possibility of resorting to it in the event of malformation of the fetus. This criterion concerned more than 95% of the 1,000 legal abortions performed each year in the country.

Abortion remains authorized in cases of rape, incest or if the pregnancy presents a danger to the mother. Very recently, in June 2022, a government provision obliging general practitioners to register pregnancies in a digital register has also heightened concern in the country. According to the ministry, such information will allow doctors to help patients, but the parliamentary opposition sees it as “a new tool of repression” against women.

Worldwide, more than 25 million unsafe abortions are still performed each year, making it the third leading cause of maternal death worldwide.

Michel Platini in “Le Monde”, a football legend transferred to the...

News Editor - June 26, 2022 0
The life of Michel Platini took a disconcerting trajectory, like the free kicks brushed by the football player, the ball curving against the laws...