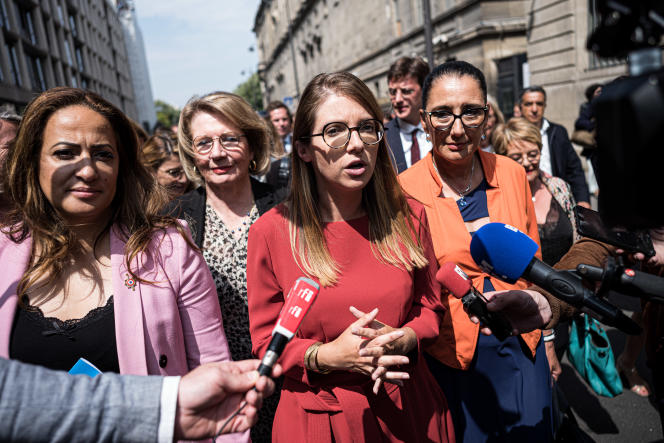 Enshrining the right to abortion in the French Constitution could be one of the first steps to garnering a majority of votes in a fragmented National Assembly.

Aurore Bergé, the president of the Renaissance group (ex-La République en Marche!) at the Palais-Bourbon announced, on Saturday June 25, the filing of a bill to include “respect for abortion in our Constitution”, after the historic decision of the Supreme Court of the United States to revoke this right.

The elected representative of Yvelines received government support at the start of the afternoon. At midday, Prime Minister Elisabeth Borne said on Twitter that “the government will strongly support this bill”, adding that “Parliament must be able to come together very widely around this text”.

The day before, Mathilde Panot, the president of the group La France insoumise (LFI) in the National Assembly, had also announced that she would propose this measure “from Monday” to the New Popular Ecological and Social Union (Nupes). A proposal, finally, tabled on Saturday by the left-wing coalition.

Responding to a “catastrophic decision for women”

Beyond the United States, this decision is “catastrophic for women: in the world, you have a woman who dies every nine minutes because an abortion was performed improperly, in an unsafe way”, underlined, Saturday morning, on France Inter Aurore Bergé, the new president of the majority group in the National Assembly.

“It also calls for us to take steps in France so that we cannot have any reversals tomorrow that could exist. This is why, as of today, with my group, we are going to table a constitutional bill to include respect for abortion in our Constitution, “added the elected representative of Yvelines, formerly Les Républicains, known for her feminist commitment.

Aurore Bergé had notably strongly defended the extension in France of the legal deadline for abortion, voted at the end of the previous legislature.

The RN, “fierce opponents of women’s access to abortion”

Could the US Supreme Court decision lead to a similar action in France? “Unfortunately, nothing is impossible and women’s rights are always rights that are fragile and that are regularly challenged,” replied Aurore Bergé.

Pointing to the new deputies of the National Rally (RN), “fierce opponents of women’s access to abortion”, she judged that it was not necessary to “take any risk in this area and therefore secure [the right to abortion]. ‘abortion], by inscribing it in the marble of our Constitution”.

“We do not change the Constitution as we change the law”, therefore, “it is a guarantee that we must give to women”, insisted the patroness of the Renaissance deputies, who believes that the measure will be “widely shared on the benches of the National Assembly and the Senate”.

Nupes in favor of a similar law

Friday evening on Twitter, Mathilde Panot, her counterpart for the LFI group, majority link of Nupes, had also gone in this direction. “The tragedy across the Atlantic compels us. To prevent any interference with the fundamental right of abortion, I propose, as of Monday, to the Nupes to file a bill to enshrine it in the Constitution, “she posted.

On Saturday, all the groups of the union of the left announced the tabling of this proposal, pointing to the refusal of the majority to legislate on the question under the previous mandate. “This Saturday, the president of the LRM group [La République en Marche] is taking up this proposal that LRM parliamentarians had rejected on several occasions under the previous term of office. We welcome this turnaround,” they wrote in a statement.

In April 2018, Agnès Buzyn, then Minister of Health, notably opposed a bill from the opposition which wanted to include abortion in the Constitution. Desiring “to avoid legislative inflation at all costs, a fortiori in constitutional matters”, she had nevertheless insisted on the “need, today more than ever, to continue our fight” for “a hard-won right”.

The Nupes and Renaissance groups (without its majority allies) have 296 deputies, more than the absolute majority (set at 289) to have a text adopted by the National Assembly, which should also be adopted by the Senate.

The American decision reacted Emmanuel Macron who regretted the “questioning” of women’s freedoms, stressing that “abortion is a fundamental right for all women”. On Wednesday, the head of state addressed the opposition in a speech to the French, summoning them “to say in all transparency how far they are ready to go”, in order to “build compromises, enrichments, amendments “, in particular, ” in a desire for union and action for the nation “.