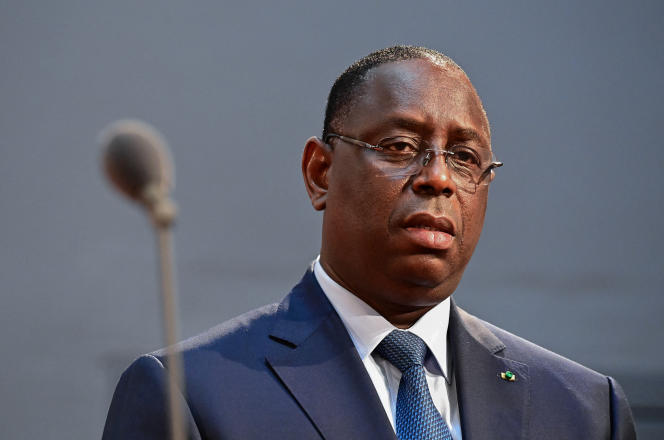 Senegalese President Macky Sall, current chairman of the African Union (AU), is traveling to Russia on Thursday (June 2) to meet with his Russian counterpart, Vladimir Putin, on Friday in Sochi, his services said in a statement. This visit “is part of the efforts of the current AU Chairmanship to contribute to the lull in the war in Ukraine and the release of stocks of cereals and fertilizers, the blocking of which particularly affects the countries Africans,” they said.

The visit takes place at the invitation of Mr. Putin, they add. Mr. Sall will be accompanied by the Chairperson of the AU Commission, Chadian Moussa Faki Mahamat. “In the same spirit, the AU has accepted President Volodymyr Zelensky’s request to send a message to the organization via videoconference, the date and terms of which will be mutually agreed,” they say.

In a message sent Tuesday to the leaders of European countries meeting in Brussels, the Senegalese president asked to do everything “to release the grain stocks available” in Ukraine but blocked due to the Russian offensive, which is organizing a blockade in the Black Sea. and prohibits access to the port of Odessa. He referred to “the catastrophic scenario of shortages and widespread price increases”. He pointed out that the current crisis follows that of Covid-19 and that this has already worsened hunger in Africa.

“The worst may be ahead of us”

“The worst may be ahead of us,” he said, recalling that many African countries, including his own, are heavily dependent on grain imports from the region. He also worried about the consequences of European sanctions excluding Russian banks from the international Swift system, a secure messaging platform allowing crucial operations such as fund transfer orders.

Senegal, with strong relations with Western countries, surprised on March 2 by abstaining from a UN General Assembly vote in favor of a resolution that demanded that “Russia immediately cease to use force against Ukraine”. On the other hand, Senegal had voted on March 24 a second resolution demanding that Russia stop the war immediately. Almost half of African countries abstained or did not vote in both votes.

Sall explained during a meeting with German Chancellor Olaf Scholz in Dakar in late May that the conflict “affects” Africans but is “on another continent”. He did, however, say “condemn the invasion”, more explicitly than in the past.