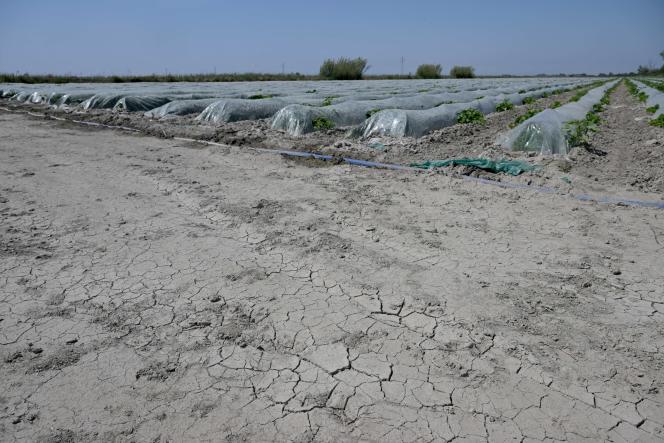 No respite in sight. After an exceptionally warm spring and a record month of May, France can now expect a summer that is also hotter and drier than normal. The risk of severe drought and forest fires is high. This is what emerges from the results of the last three months and the seasonal trends for the next three, presented by Météo-France, Friday, June 3.

May ranked as the hottest on record for the country, beating May 2011 by almost 1°C. “It reached an unprecedented average temperature: 17.8°C, i.e. the values ​​of a hot month of June”, specifies Jean-Michel Soubeyroux, deputy director of climatology at Météo-France.

France in particular experienced an episode of “exceptionally early, lasting and intense” heat between May 15 and May 22. Of the 135 measuring stations in the main Météo-France network, 25 maximum temperature records for the month of May have been broken, particularly in the Massif Central, Auvergne-Rhône-Alpes and Corsica. The mercury thus reached 36.2°C in Ajaccio, 35.4°C in Albi, 32.4°C in Mende (Lozère) or 32°C in Aurillac.

In addition, 40 records have fallen for minimum temperatures, from Aquitaine to the east of the country, with Ile-de-France and Hauts-de-France. Météo-France recorded 23.5°C in Nice, 20.7°C in Lyon and 20°C in Bordeaux, “tropical nights in the middle of summer”, specifies Jean-Michel Soubeyroux. On a daily average, temperatures may have been more than 10°C higher than normal for the season (1981-2010), with a maximum of 14.4°C anomaly on May 22 at Mont Aigoual, in the Cévennes. In total, spring recorded forty-four days in a row above normal, again a record for this season.

Beyond being very hot, the month of May was also very dry. With a rainfall deficit of 65% on average in the country, it surpasses May 1989 and May 2011 (which had recorded a deficit of 55%). Total rainfall was less than 20 mm over a large part of the territory (i.e. a deficit of 80%), with minimums of 5 mm, as in Toulouse.

The month of May weighed heavily in the spring balance sheet. March, April and May rank as the third hottest spring since 1900, behind 2020 and 2011. “The three hottest springs have been in the last decade, a sign of global warming,” Jean observes. – Michel Soubeyroux.

Spring 2022 is also the third driest on record, behind 2011 and 1976, a historic drought year. Almost the whole of the territory has been affected by a drought of the soil which one normally encounters only once a decade at this season, or even less. The soil moisture index on June 1 is usually encountered in mid-July. “The early dryness of the surface soils, linked to the persistent deficit of precipitation, was accentuated by higher than normal temperatures”, explains Météo-France. And the situation could get worse.

It appears from the various climate models analyzed by Météo-France that summer will be hot, very likely (70%) in the southern half of the country and likely (50%) in the northern half, due to the predominance of anticyclonic conditions expected over southern Europe and the Mediterranean basin. “We can expect a hot summer like those of 2020, 2019 and 2018, but that says nothing about the probability of experiencing heat waves,” said Jean-Michel Soubeyroux.

A dry scenario is also likely over the southern half, but nothing is emerging at this stage in terms of precipitation over the North. “We have concerns about the drought this summer,” warns the scientist. What will happen in June will be essential, especially concerning the impacts on agriculture. The drought of 1976 had developed a lot during the month of June, “he recalls, hoping that the storms forecast for this weekend will bring precipitation not too intense, likely to improve the situation. According to the map published in mid-May by the government, 22 departments present a “very probable” risk of drought by the end of the summer, mainly in the South-East and West.

“With a warmer than normal summer, we can expect a summer with a significant risk of forest fires, adds Romaric Cinotti, vegetation fire referent at Météo-France. However, it cannot be excluded that rainy episodes temporarily calm the danger. »

Climate change worsens the frequency, intensity and duration of heat episodes, but also of drought. According to Météo-France, France, which has already warmed by 2°C since 1961-1990, has experienced three times more heat waves over the past thirty years than during the previous forty-two. The year 2021 was cooler than the previous ones, but it was marked by strong monthly temperature variability.

In the latter case, France should face an average of 20 to 35 days of heat wave per year at the end of the century, against 3 to 4 days over the reference period 1976-2005. Heat waves could even last more than one or two months in the summer in the hottest regions today, in particular the Mediterranean arc, the Rhône valley and the Garonne valley. Meteorological droughts, i.e. periods without rain in the summer, will increase by 30% to 50% by the end of the century, in the intermediate and pessimistic scenarios.

So that over the period 2081-2100, in a pessimistic scenario, the fire season will last longer (two to three months in the south of France, compared to one month today), will concern a larger area of ​​metropolitan territory and will affect new types of vegetation, with “crop fires, stubble fires, wildfires, all the small vegetation that is not cleared and which is not currently affected by the fires”, specifies Romaric Cinotti.