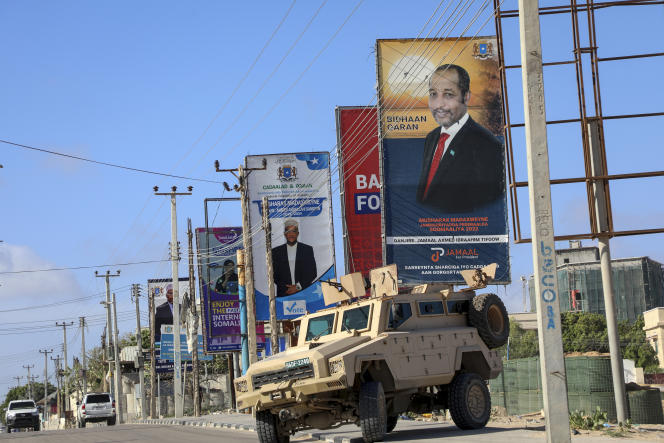 Somali parliamentarians are due to elect a new president on Sunday, May 15 in a poll expected for more than a year in this unstable country in the Horn of Africa, faced with the insurrection of radical Islamists Chabab and a historic drought. No less than 39 candidates, a record, have been registered for the election, which will be held under tight security in a hangar at the airport in the capital Mogadishu.

The outgoing head of state, Mohamed Abdullahi Mohamed, known as Farmajo, is a candidate for re-election, which none of his predecessors has managed to achieve. Two of them, Hassan Cheikh Mohamoud (2012-2017) and Sharif Cheikh Ahmed (2009-2012), appear in front of him, as well as his former Prime Minister (March 2017-June 2020), Hassan Ali Khaire.

Other candidates include Puntland regional president Said Abdullahi Dani and only one woman, former foreign minister and deputy prime minister Fawzia Yusuf Adan. This election must mark the end of more than a year of political crisis.

Farmajo’s term expired in February 2021, without an agreement with regional leaders on the organization of new elections. The two-year extension of his mandate by the deputies in April 2021 had sparked fighting in Mogadishu, reviving the memory of the decades of civil war that ravaged the country after 1991.

The Prime Minister, Mohamed Hussein Roble, was then responsible for carrying out the elections, but the process had progressed painfully, delayed by conflicts at the top of the executive and between the central government and certain federated states.

This election “offers a reset button,” said Samira Gaid, executive director of the Hiraal Institute, which specializes in security issues. “The country is very polarized right now and whoever gets elected will have to work to reunite the country,” she said. Somalia has not held one-person, one-vote elections since 1969, when dictator Siad Barre seized power by force.

The election follows a complex indirect system, in which state assemblies and delegates from a myriad of clans and sub-clans choose the legislators who, in turn, appoint the president. To be elected, a candidate must collect at least two thirds of the votes of deputies and senators (184).

The voting strategies, in which the affiliations to the different clans will weigh, will be adjusted over the ballots. “In terms of outcomes, Somali politics is notoriously difficult to predict,” recalls Omar Mahmood, analyst at the International Crisis Group: “It is essentially a matter of alliances and relationships rather than programs. »

This week, Somalia’s supporters and donors – including the United States, the United Nations and the African Union – urged Somali leaders “to conclude this final stage of the electoral process quickly, peacefully and credibly so that attention can turn to national priorities and state building”.

For a year and a half, the international community has multiplied calls to complete the elections, believing that the delays diverted the authorities from the fight against the radical Islamists Chabab, affiliated with Al-Qaeda, who have been leading an insurgency in the country for fifteen years. .

In recent months, the Chabab have intensified their attacks, notably committing a bloody double attack in the center of the country on March 24 (48 dead), then a major attack against a base of the African Union force (10 dead according to an official record).

This election will also be crucial for the economic future of Somalia, where 71% of the population lives on less than $1.90 a day. The IMF has warned that an aid program could automatically end on May 17 if a new administration is not in place. The government asked at the end of April to postpone this deadline by three months, without response for the moment.

The country is also facing one of the worst droughts in decades. Humanitarian organizations fear a famine similar to that of 2011, which killed 260,000 people.