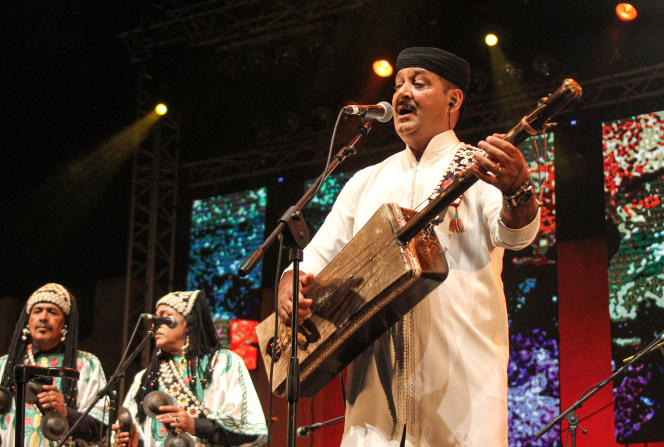 After two years of slump imposed by Covid-19, Morocco is relaunching the major music festivals that have made its reputation and serve its influential cultural “soft power” on the international scene. In Fez, Essaouira or Casablanca, from Sufi music from northern India to Gnaoua songs from southern Morocco, via Cuban funk and Brazilian tropicalism, the kingdom is once again open to the sounds of the world from the beginning June.

Often stemming from private initiatives, these festivals, which attract hundreds of thousands of foreign and Moroccan fans, offer an invaluable showcase to the country. “In Morocco, cultural life, in particular certain festivals that have become emblematic, rests on a solid and promising base”, explains to AFP Neila Tazi, the organizer of the Gnaoua and World Music Festival, launched in 1997 in Essaouira (south). . “It represents considerable ‘soft power’ for the country,” said Ms. Tazi, who chairs the Federation of Cultural and Creative Industries.

In fact, for the resumption of the festival season after an absence of two years, the programmers have taken care of their posters. It is in Essaouira, on June 3, that the first note of the Gnaoua Festival will rise, a must in the world music calendar, presented as a “cultural project of resistance”. For the first time in its history, the organizers have opted for a “travelling festival” which, after a first stop in the port of Essaouira, will take the musicians to Marrakech, Casablanca and Rabat until June 24.

Over time, this free event has succeeded in showcasing and breaking down barriers between ancestral Gnaoua art by creating bridges with jazz or blues and attracting a young and urban audience (up to 300,000 spectators in three days). This spiritual music, initially carried by descendants of slaves in the Maghreb, was included on the list of intangible heritage of Unesco in 2019.

On the program, concerts by Gnaoua mâalems (“masters”), but also young artists appropriating this musical tradition, such as Asmaa Hamzaoui, one of the few women in an almost exclusively male environment. Among the guests: English folk singer Piers Faccini, Cuban Cimafunk and Israeli jazz star Avishai Cohen.

Another meeting that resonates beyond Moroccan borders: the Festival of Sacred Music in Fez, from June 9 to 12. Faithful to its cultural and spiritual tradition, it has built its 2022 edition around “architecture and the sacred”. “Everything in music is a story of architecture, forms and ornaments. It’s all about constructions, lines, solids, voids, superpositions, heights,” explains Bruno Messina, artistic director of this festival founded in 1994.

Hailed by the UN in 2001 as a major event that has contributed to the dialogue between civilizations, the Fez festival has in the past hosted Björk, Patti Smith or Barbara Hendricks. The sacred chants will be embodied this year through the voices of the Roohani Sisters (Indian classical music), the Kazakh Saniye Ismail, performer of traditional Uyghur music, and Sardinian polyphonies.

If the Mawazine-Rhythms of the World festival in Rabat – the largest in Africa – will not take place, the Jazzablanca will steal the show, from July 1 to 3, for its 15th edition in the economic capital of the kingdom, thanks to a sparkling program, with the legendary Gilberto Gil, Mulatu Astatke, the father of ethiojazz, Ben Harper, Ibrahim Maalouf, Asaf Avidan, figure of Israeli folk-rock, etc.

Placed under royal patronage, this musical effervescence is not only intended for foreign countries. It also aims to give as many Moroccans access to culture as possible. But on the ground, despite “significant support for the organization of demonstrations and events of national and international scope […], this attention has not translated into public policies, as evidenced by the lack of budgetary resources and human resources dedicated to them”, according to the commission on the New Development Model (NMD), a plan initiated by King Mohammed VI and setting the main objectives to be achieved by Morocco by 2035.