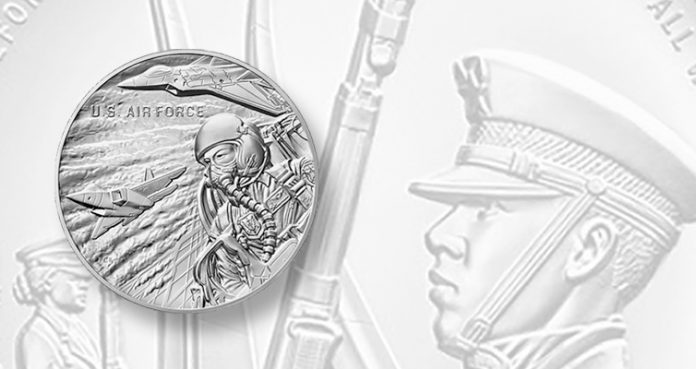 The U.S. Mint has delayed the release of the U.S. Air Force 2.5 ounce.999 fine-silver medal until mid-July because the bureau is experiencing difficulty acquiring planchets and projected demand exceeds inventories.

For the 2-inch (50.8 millimeter) medals, a special planchet is required that Mint currently does not use for any other products.

The Mint has canceled the sales dates for February 22 and June 22.

According to Michael White, a U.S. Mint spokesperson, “The Mint’s Air Force 2.5 Ounce Silver Medal — its first in its new Armed Forces Silver Medal Series – has received a total of ‘Remind Me” email/text notifications, this indicates that there will be more demand than inventory as projected demand exceeds supply.” A June 22 news release by Michael White stated that the Mint had received over 20,000 messages/texts reminding them about the Mint’s Air Force 2.5 Ounce Silver Medal

White’s email stated that “Other recent Silver product offerings have resulted an extraordinarily high volume in BOT traffic.” These BOTs were designed to perform technology-driven transactions that interfered with Mint customers’ transactions.

The Mint has found a solution to most of the problems caused by BOT traffic. As it will allow our website to operate more smoothly, we are diligently working to implement that solution. Despite our efforts to make product access easier, demand continues to exceed our supply of silver blanks. This means that not everyone will be eligible to purchase the medal.

Mint officials revealed that a 1-ounce.999 silver version of Air Force Silver Medal (coded SAF1) will be issued sometime in 2022. Customers can now request “Remind Me” notifications to receive that medal.

The Mint didn’t reveal a price or confirm the finish of the future 1-ounce edition.

The U.S. Mint will release the U.S. Air Force Silver Medal. This is the first of a planned ongoing series of medals that honor the U.S. Armed Forces branches.

To honor the U.S. Marine Corps and U.S. Navy, silver medals will be issued in the series. The two design review panels have already reviewed each medal’s design and made their recommendations.

The U.S. Air Force Medal’s Obverse Design was created by Paul C. Balan, U.S. Mint Artistic Infusion Program Artist and sculpted in U.S. Mint Medallic artist Phebe Shemphill. Balan’s obverse design features a fighter-jet pilot in his cockpit. F-35 fighter-jets are flying above him and the landscape is far below.

Hemphill sculpted the reverse design of the medal. It was designed by Jamie N. Franki, an AIP artist. The medal’s reverse design features the dynamic perspective of three spires from the Air Force Memorial. One of these spires extends beyond the border of it. The U.S. Air Force Honor Guard is gathered around the memorial in ceremonial assembly. The Air Force’s core values are inscribed at the border.