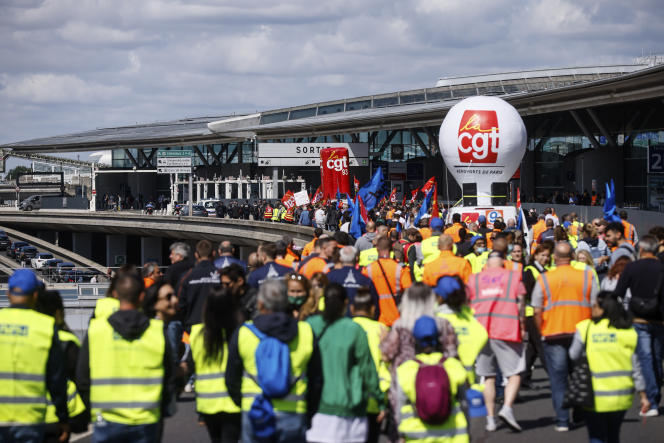 Flights canceled and others delayed. A new strike for wages at several airports, including Roissy – Charles-de-Gaulle (CDG), disrupted air traffic on Friday July 1 at the start of the summer school holidays.

The Directorate General of Civil Aviation (DGAC) had asked companies to preventively cancel 17% of flights arriving or departing from the first French airport (CDG) on Friday morning, a social movement by firefighters having forced the closure of tracks since Thursday.

This represents 100 aircraft movements out of the 1,300 planned for the day, the platform manager, Groupe ADP, told Agence France-Presse (AFP). Traffic at Orly, on the other hand, is not affected, according to the same source.

On Friday, the firefighters were joined by other ADP employees and subcontractors as part of an inter-union and inter-professional movement, the notice of which runs throughout the weekend.

“Since the Covid crisis, quite a few colleagues have been made redundant. We find ourselves doing the work of three people, ”says Anissa Belabbas, regulator, employee of Alyzia (3S Group) and CGT representative. “We are asking for a salary increase and better working conditions. We need people who know the business. Otherwise you are asked for higher cadences,” she adds.

“We are already at 6% inflation, at the end of the year, how much will it be? The battle has only begun (…). The only guarantee we can have is to index wages to prices, ”said a CGT union representative from ADP before the start of a demonstration of some 300 people between the terminals.

This punctually blocked road access to the airport, according to ADP, which also pointed to “a few delays” of departing planes, but “no blocking zone” due to strikers at inspection posts or handling. At 11:30 a.m., of all the flights displayed at terminal 2E, less than 10 were declared late.

In total, “208,000 passengers are expected” this Friday, an airport source told AFP, adding that the situation was “rather calm”. At Air France, the cancellations concern short and medium-haul flights, long-haul flights not being affected.

At the call of an inter-union FO-CGT-CFE-CGC, a strike notice was also filed from Friday to Monday at Marseille-Provence airport, but its management did not foresee either cancellation or delay, personnel having been requisitioned by prefectoral order.

The strikers denounce a restructuring aimed, according to the union representative FO Olivier Traniello, to “drastically reduce the staff (…) while we return to traffic of 2019, or even higher, with teams that are no longer ready and armed for it. to face “. They are also protesting against reductions in premiums.

ADP workers are demanding wage increases of 6%, retroactive to January 1, while management is offering 3% on July 1, according to the unions. The group did not wish to comment on this point.

ADP, affected like the entire aviation sector by the pandemic, has launched a plan of voluntary departures and salary cuts, accompanied by the promise of a return to the same level of treatment once traffic returns to the level before. -crisis, which is the case on certain beams.