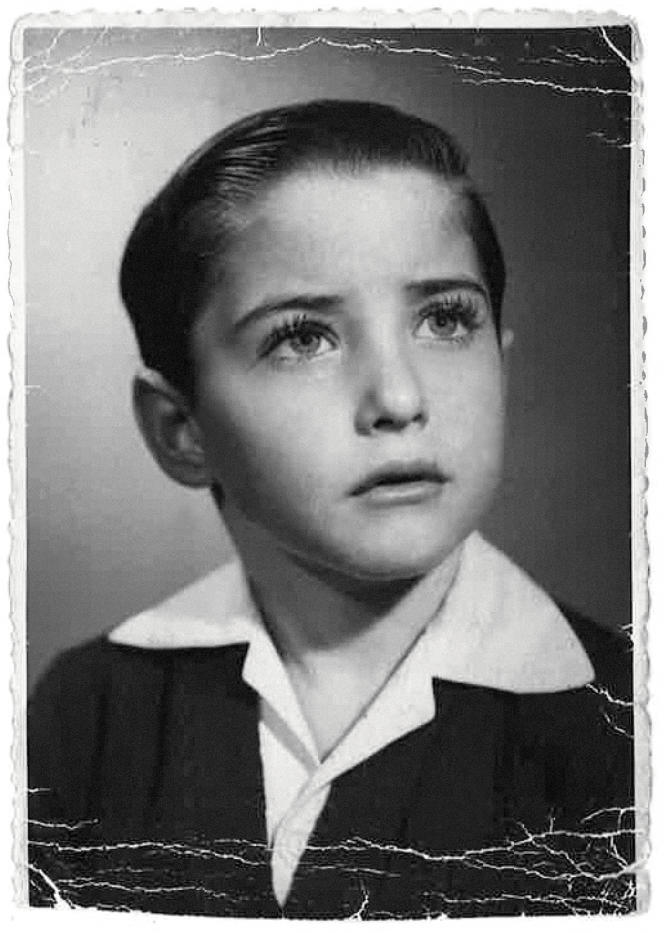 This photograph was taken in 1955. It was the winter I was 5 years old. There was an unchanging ritual at home: twice a year, my parents and I would go and have our photos taken by a professional. I really liked that meeting with Gomez Teruel; his shop was filled with odd objects, mismatched styles of furniture. There was a whole ceremony, we had the right to choose the setting for the photo. I was an only child. Above all, my father did not want to obey Franco, who asked families to have many children (in the same way, he categorically refused to wear the thin mustache, an attribute of the Francoists).

We lived at the time in Morón de la Frontera, a small town 60 kilometers from Seville, in what is now called a “town house”. Fostered by loving parents, I spent most of my life between the walls of the patio, watching the clouds in the blue sky and dreaming. In the photo, it looks like I have slicked back hair. In reality, I had ears and my mother poured cologne in my hair to tame them. My taste as a perfumer for fresh waters probably comes from there.

I grew up surrounded by smells of all kinds: the incense of the churches (the city had no less than twenty-five), that of the carnations arranged in front of the altar, but also the scent of orange blossom Corpus Christi processions. After the siesta, we drew water from the bottom of the well to sprinkle the slabs of the patio and refresh the atmosphere, that impression stayed with me. I realize today that I am trying to find the smell of this raw naturalness mixed with an aquatic freshness.

A scene comes back to me: while my aunt is rocking in the rocking chair, making small movements with her fan (noises that had a soporific effect on me), my grandmother is stringing jasmine flowers on long barrettes that she planted in her bun. I remember like it was yesterday the smell of slightly oxidized petals. Distractions were not numerous and I watched the passage of the prickly pear seller who passed with his cart in front of the house. I would call out to him through the window and he would cut up his fleshy berries for me, which gave off a fresh, aqueous and tasty smell.

Seen from Andalusia, French perfume was a luxury out of reach; my parents were content with local products. The best-seller at the time was Varon Dandy, a 1920s perfume that we were fighting over. The label depicted a man with a mustache sitting in a barber chair. I remember an unpleasant balsamic note that my father associated with the Franco regime to the point of refusing to wear it. He preferred the eau de cologne that he got at the neighborhood pharmacy, each pharmacy having its own exclusive recipe.

This happy childhood allowed me to store up a host of smells that reappear from time to time in certain creations, but my attraction to perfume came much later, around 17 or 18, when I entered the Beaux- Arts de Genève, discovering an article on Jean-Paul Guerlain in Vogue magazine. My fate was sealed.