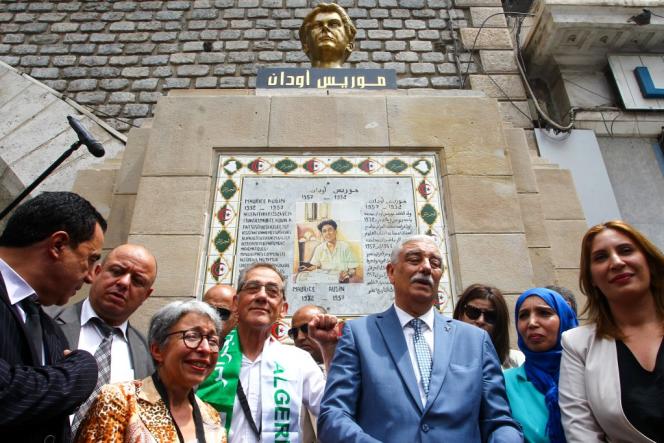 The son of Maurice Audin, an anti-colonial activist assassinated by the French army in Algeria in 1957, believes that the “truth” is more important than a possible apology from Paris for the crimes of colonization, “inexcusable” in his eyes.

Pierre Audin, a mathematician like his father, now retired, has just obtained his Algerian passport after a long wait.

He has been in Algeria since the end of May, where he attended on Sunday the inauguration of a bust bearing the likeness of his father in the square that bears his name in the heart of the capital and which was the epicenter of Hirak, the pro-democracy protest movement that forced ex-president Abdelaziz Bouteflika to resign.

In a memorial gesture, French President Emmanuel Macron acknowledged in September 2018 “on behalf of the French Republic”, that the young communist mathematician Maurice Audin had been “tortured to death, or tortured and then executed by the French army” in 1957 He had also asked “forgiveness” to Josette Audin, his widow.

For Mr. Audin, this recognition is long overdue: “I was a month and a half old. I am 65 today. And when the president came to my mother I was already 61 years old and already retired. So I was barely born when it started and when the French power agreed to recognize what it had done in the case of Maurice Audin, (…) a life (…) had passed. »

Despite this recognition and other symbolic memorial gestures by President Macron, France rules out any “repentance” or “apologies” sixty years after the end of the Algerian War (1954-1962).

“There are a number of crimes, misdeeds that have been committed by France against Algeria and the Algerians. What is important is to tell the truth. But certainly not to say, “I wash my hands of it, I asked for forgiveness.” There is no forgiveness to be had, it is inexcusable, “said Pierre Audin in an interview with AFP in Algiers.

He does not hide his joy at returning to his native country, where he is going for the first time as an Algerian. “When I’m in Algiers, the most beautiful city in the world, I’m good, I feel good. I feel at home,” he says.

“I’ve waited long enough to get my passport. I only really felt the need to have this proof of my nationality after President Macron’s declaration,” he adds, hoping that his Algerian nationality will help him in the search for his father’s remains, never found. “A few days before my mother died, I promised her to continue looking for the remains of the body (…), he explains. The fact of being Algerian is to address the authorities of my country with my green passport, it is something important. »

“As long as there is a doubt, I think it is worth going to dig in the various places indicated by various witnesses. It’s a beginning. Governments must join hands” to glean information on the fate of Algerians who disappeared during the Battle of Algiers, he adds.

Since 2018, Mr. Macron has also acknowledged the responsibility of the French army in the death of nationalist lawyer Ali Boumendjel during the battle of Algiers, a stele has been erected in France in memory of Abdelkader, Algerian national hero of the fight against French colonization, and the skulls of Algerian resistance fighters from the 19th century returned to Algeria.

And in December 2021, France opened its archives on the Algerian war to “face the truth”.

Despite these gestures, the memorial file remains a source of recurring tension between Paris and Algiers, which is preparing to celebrate on July 5 the 60th anniversary of its independence, which occurred on July 5, 1962, after one hundred and thirty-two years of French occupation.

“There is a lot of pressure in all directions regarding the memorial policy” initiated by the French president, regrets Mr. Audin. “When Mr. Macron makes a step in the right direction and the Algerians opposite are choosy, he explains, there is no reason for him to continue when he is under pressure from the right and the extreme right”.