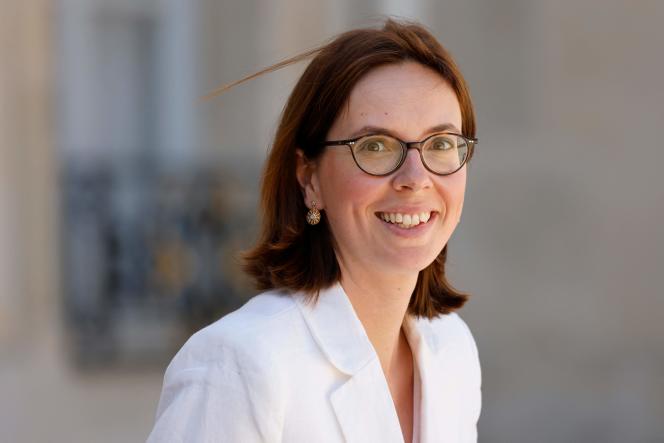 Amélie de Montchalin, 36, was appointed Minister for Ecological Transition and Territorial Cohesion on Friday May 20, in the government of Matignon’s new host, Elisabeth Borne. She will have the task of leading one of the most important ministries in the order of protocol.

Asked about “climate issues” by a young woman, Thursday, May 19 during her first trip, the Prime Minister replied that she wanted to put them “at the heart of all policies”. “Given the march that has to be done, it’s a radical transformation of everything: our way of producing, [of] moving, [of] housing,” she began by saying, arguing that “that’s why the President of the Republic announced that the Prime Minister would be in charge of ecological planning”. “If we want to win this battle, all the choices we make must take this dimension into account,” said Ms. Borne, while the suspense remained over the composition of the government on Thursday evening.

Between the two presidential rounds, on April 16, Emmanuel Macron planned to appoint a prime minister “directly in charge of ecological planning”, who would be supported by two “strong” ministries: a ministry of “energy planning and a ministry “responsible for territorial ecological planning”. Its goal ? Confront the “fight of the century” and “make France the first great nation to get out of gas, oil and coal”, as well as go “twice as fast” in reducing greenhouse gases.

First elected deputy of La République en Marche (LRM), in 2017, in the 6th constituency of Essonne, she succeeded Nathalie Loiseau, on March 31, 2019, as Secretary of State for European Affairs, to finally be appointed Minister of Transformation and Public Service, in July 2020.

Straight from the private sector, she joined HEC Paris in 2005 and decided to do her first internship with the deputy of Yvelines Valérie Pécresse (then a member of the Union for a popular movement, which became Les Républicains). In February 2007, the intern embarked on the legislative campaign and accompanied Ms. Pécresse to the Ministry of Higher Education and Research, in full reform on the autonomy of universities.

Holder of a master’s degree in public administration from Harvard Kennedy School, the young economist, who worked at Exane BNP Paribas during the euro zone crisis between 2009 and 2012, was seduced by the “start-up” side of LRM, which she joined in December 2016, after the defeat of Alain Juppé in the right-wing primary – she had worked on the design of his economic program.

During the 2017 legislative elections, she won the 6th constituency of Essonne without having previously held a political office. She quickly melts into her role, appearing as a “techno” figure, a fine connoisseur of economic issues. On the merits, this convinced liberal pleads for a form of “pragmatism” and for an “efficiency of public spending”.

Transformation of the ENA

Gilles Le Gendre, the new president of the LRM group in the National Assembly, then speaks of Ms. de Montchalin as “[his] number 2 on all subjects, (…) another myself”. During Brexit, in March 2019, the young woman succeeded Nathalie Loiseau, in the government, as Secretary of State for European Affairs, where she laid down her conditions for the agreement establishing the future relationship between the European Union and London.

Appointed to the Ministry of Transformation and the Public Service, under the government of Jean Castex, in July 2020, Ms. de Montchalin notably carried out the draft ordinance for the reform of the senior management of the public service, in 2021, which included the transformation of the National School of Administration into a National Institute of Public Service in 2022, the abolition of many bodies of senior civil servants and the creation of a single body, that of State administrators. For the legislative elections of June 12 and 19, Amélie de Montchalin is again a candidate in the 6th district of Essonne.

News Editor - May 21, 2022 0
The United States and South Korea offered, on Saturday, May 21, their aid to North Korea to fight the Covid-19 epidemic which is raging...