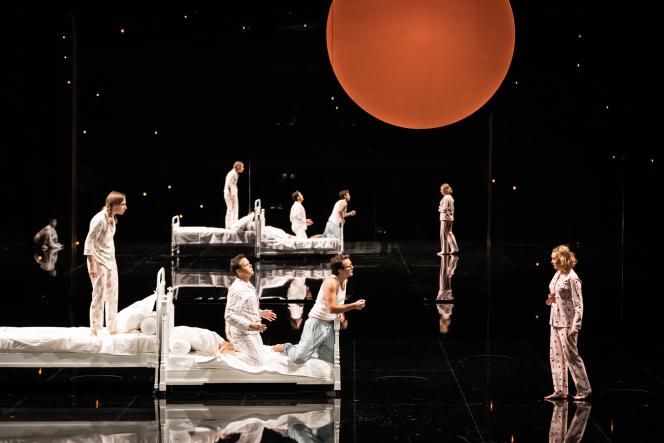 It’s hard to imagine night music more sensual and delicate, magical, mysterious (not without a hint of playfulness) than the overture to Benjamin Britten’s A Midsummer Night’s Dream, after Shakespeare, presented at the Opera from Lille until May 22. A marvelous show that comes from this little miracle that the opera always summons, rarely succeeds, the osmosis between staging, vocal stage and orchestra pit. At the stage controls, Laurent Pelly signs one of his greatest successes, rising almost to the rank of the legendary Dream of Aix by Robert Carsen. Which is not little.

Insect sounds. The darkness is populated by golden candle lights descending from the hangers on the wire of the glissandos of the double basses. Then a horde of elves and elves, whose luminous antennae quiver like fireflies, emerged from trapdoors. Perched on invisible articulated arms, Oberon and Tytania seem to glide through space, flying over the orchestra pit and up to the caryatids that adorn the Lille stage setting. The queen of the fairies does not intend to yield to her king of the elves of husband the young page whom she has taken in. Same disorder on the human floor where the love war is raging. The Athenian lovers are in a crisis, between those who want to marry (Hermia and Lysander) and cannot, for lack of paternal consent, and those who clash – Helena runs after Demetrius, who refuses her his love, smitten that he is from Hermia, his betrothed.

To the immense and soft bed of greenery extended by Carsen responds a small white girl’s bed – Hermia’s -, soon quadrupled, whose movements on wheels will enliven the hide-and-seek of a seduction in pajamas, until the confrontation of couples in a duel, headboard against headboard, like deer in heat. It is that, by using, on Oberon’s orders, a love potion initially intended to get revenge on Tytania, Puck, the leaping blunderer, has sown chaos by trying to settle the Athenian sentimental conflict. Here is now Lysander in love with Helena. Only Tytania, curled up in a sexy evening dress in her crescent moon, will swoon over the donkey Bottom, a craftsman transformed into an animal while he was rehearsing a play with his companions in order to break into the court of marriage. princely.

However magical and inventive it may be, the scenic imagination is not limited to “special effects”, and the direction of the actors, with the cord, summons with virtuosity the fantastic world of the spirits, that of the Athenian heroes, and that of the Earth people. Vividly outlined situations, gallery of quicksilver portraits, this Shakespearean dream achieves the ideal alchemy between comic escarpments and poetic beaches. A happiness that does not come alone: ​​the musical part will confirm the happy choices of Caroline Sonrier, whose production crowns the end of the Lille season.

Couple in every way worthy of praise, Oberon and Tytania. Lunar and disturbing character endowed with a magnetic presence, the countertenor Nils Wanderer deploys the seductive line of a long and flexible voice while the round and luscious soprano of Marie-Eve Munger darts its high notes without difficulty into the stratosphere. Particularly matched vocally, the two couples of lovers, whose voices intertwine like the threads of their story. The velvet of Antoinette Dennefeld’s mezzo (Hermia full of charm) responds to the shimmering soprano of her rival and friend, Helena, camped by a Louise Kemény between hysteria and despair.

On the men’s side, it is the heroic ardor of tenor David Portillo (Lysander) that is opposed by the testosterone determination of baritone Charles Rice, Demetrius without fear and without reproach. Short roles but striking interventions for the princely duo formed by Tomislav Lavoie (Theseus) and Clare Presland (Hippolyta), while the ample and warm bass of Dominic Barberi (Bottom) oscillates between drama and burlesque, surrounded by fellow craftsmen at the height of their character. Same observation for the excellent Young Chœur des Hauts-de-France led by Pascale Diéval-Wils, as well as for the actress Charlotte Dumartheray, Puck vibrating, between quickness and vociferation. In the pit, the direction of Guillaume Tourniaire at the head of the National Orchestra of Lille delivers an ideally rigorous and hedonistic version of this Songe, between parodic accuracy, elegy and poetry.