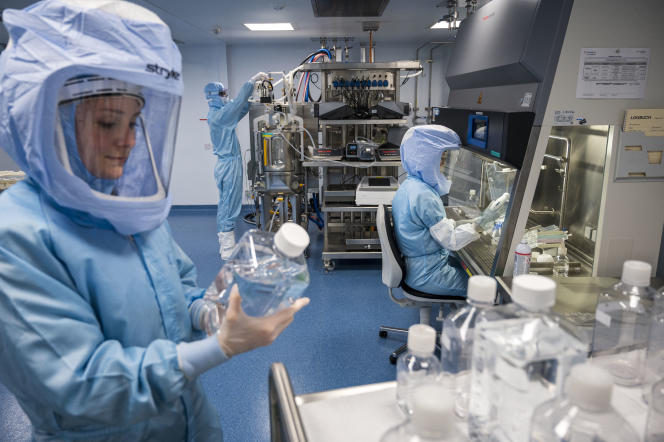 This is a setback for the Pfizer-BioNTech couple, which has admittedly gone somewhat unnoticed. On April 26, the BioNTech laboratory had to lower its claims on its European patent applications, relating to the RNA vaccine against Covid-19 that it markets with Pfizer. The firm thus renounced its “initial ambition of a vast monopoly”, estimated in a press release Médecins du monde (MdM).

This is “a victory” for MdM, rejoices Chloé Forette, “Price of drugs and health systems” advocacy manager for the NGO. This renunciation of the firm, in fact, follows an action launched by MdM on April 5th. Wishing to challenge some of BioNTech’s claims, the NGO filed a “third party observation” with the European Patent Office (EPO), a procedure open to all once the patent application is made public (i.e. eighteen months after its filing), and for a period of three months.

Before detailing what justifies this challenge, an apparent paradox should be underlined. Even though the two anti-Covid-19 RNA vaccines, that of Pfizer-BioNTech and that of Moderna, are massively deployed around the world, no patent has yet been granted for these technologies based on messenger RNA, which had so far never led to a marketed product.

No wonder, actually: BioNTech filed its first patent applications with the European Patent Office in April 2021. However, the procedure for granting a European patent lasts on average two years: the examination is therefore still in progress.

On April 5, MdM therefore launched a procedure challenging BioNTech’s claims to “avoid an abusive privatization of essential knowledge on the production of vaccines”, an abuse “that would prevent other companies from producing them”. The NGO did not target patent applications from Moderna, the other firm developing an anti-Covid-19 RNA vaccine, “because this company has stated that it will not enforce its patents if third parties were trying to copy them for the duration of the pandemic,” says a patent expert who voluntarily assists the NGO and does not wish to be named. For its part, BioNTech assures: “We will not assert our patent rights against certain parties in Africa who are working to improve access to RNA vaccines against Covid-19 on the continent during this pandemic”, a more limited commitment than that of Moderna, therefore.

Quick reminder: For an invention to qualify for a patent, it must meet four criteria. It must propose a technical solution to a technical problem, possibly give rise to an industrial application and, above all, demonstrate novelty and inventive activity.

MdM analyzed the scientific literature published before the pandemic. His verdict: BioNTech’s two patent applications show “a clear lack of inventive step, a criterion required to obtain a patent”. A majority of the elements of these requests, in fact, obviously stemmed from already existing knowledge, resulting from public research projects on messenger RNA vaccines and against coronaviruses. “BioNTech has only assembled technological bricks already available, sums up the patent expert. This does not allow him to pass the bar required for the inventive step criterion. »

Now let’s look at BioNTech’s second request. It relates to the sequence of the viral RNA which corresponds to the Spike protein of SARS-CoV-2. However, this sequence “had been decoded as early as January 2020 by Chinese researchers. The filing of BioNTech’s application was made three months later,” continues the patent expert. The firm, of course, tried to justify the inventive nature of its vaccine by introducing two amino acids (the building blocks of proteins) into the Spike protein. These two amino acids are prolines which stabilize the Spike protein in a conformation favorable to the immune response. But here again, the inventive step is lacking: “This introduction of two prolines to stabilize a Spike protein had already been published in 2017, for a vaccine against the SARS-CoV-1 coronavirus, in a joint academic work” adds this expert .

For their part, “the EPO examiners had already raised points concerning the lack of inventive step in the BioNTech patent application, explains the EPO, points which they communicated to the patent applicant”. On April 12, the EPO also transmitted MdM’s observations to the firm.

In likely response to these two objections, BioNTech narrowed the scope of the claims of its two patent applications and, as of April 26, only claims the presence of a particular molecule of lipids in the nanoparticle that surrounds the viral RNA. . “It’s a big step: if a third party [another company] uses the same RNA in a lipid nanoparticle but doesn’t use that particular lipid, it’s no longer within the scope of the patent,” says Chloe. Forest. Clearly, it will be easier for a third party to produce an RNA vaccine close to, but not quite identical to, BioNTech’s, without having to pay fees to BioNTech.

And now ? “The patent grant procedure will enter a second phase, the substantive examination, explains the EPO. A panel of three technology experts will then decide, based on applicable law, whether a European patent can be granted for this vaccine, following BioNTech’s amended application. »

Doctors of the World intends, more broadly, “to warn about the too easy granting of undeserved patents”, specifies Chloé Forette, thereby creating illegitimate monopoly positions for certain economic actors. “In 2020, patents in force worldwide increased by 5.9%, to reach approximately 15.9 million”, notes MdM, the duration of a patent being twenty years. Certainly, regarding BioNTech’s anti-Covid-19 vaccine, the EPO pointed to the lack of inventiveness of the firm’s claims, but “it is exceptional that the EPO goes in this direction”, notes Chloé Forette. In addition, “there are other examples of questionable patent applications on anti-Covid-19 vaccines, including those of Moderna, which generally follow the same principle”, indicates the NGO.

However, underlines MdM, the research and development of messenger RNA vaccines has been made possible “thanks to public support for basic research for decades”. Since 2019, the amount of public and philanthropic funds for the development, production and supply of vaccines against Covid-19 is estimated at 51.1 billion dollars. “The fact that large multinational corporations usually end up controlling the rights to the results of this collective effort is problematic. There should be at least partial public control over the technology, to allow for a more equitable sharing of public investment. “While several billion doses of the Pfizer-BioNtech vaccine have been administered worldwide since the start of the pandemic (out of a total of 12.1 billion doses, all vaccines combined), the Pfizer group, in 2021, “ more than doubled its net profit”, which “reached 22 billion dollars”, notes MdM.