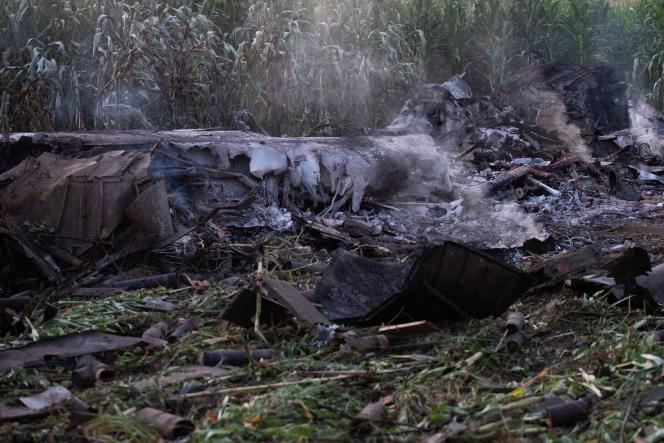 An Antonov cargo plane crashed on Saturday evening, July 16, in fields in the town of Paleochori Kavalas, in northeastern Greece. According to press reports, the plane was flying between Serbia and Jordan, and had just requested an emergency landing permit at the Greek airport of Kavala, but did not complete the maneuver in time. No official information has filtered on the number of people on board the plane, which was still burning several hours after the crash.

On Sunday morning, drone footage shot by the Greek television channel ENA showed the long trail of debris left by the aircraft after its crash, followed, according to several witnesses and local authorities, by fires punctuated by explosion. Faced with the uncertainty of the cargo transported by the Antonov – the major general of the fire department, Marios Apostolidis, mentioned to public television ERT a “white substance” escaping from the wreckage of the plane -, Experts from the army and the Greek Atomic Energy Commission were still very cautiously approaching the scene of the incident, helped by a drone and equipped with measuring instruments.

The number of people on board the plane still unknown

According to local authorities, seven fire engines were deployed to the scene of the crash, but could not approach the aircraft, which continued to be rocked by explosions. Early on Sunday, two firefighters were taken to hospital with breathing difficulties from the toxic fumes.

According to ERT, the plane was operated by a Ukrainian airline, Meridian. His route on Saturday, as recorded by the FlightRadar platform, shows a departure from the Serbian city of Nis around 8:30 p.m. (Paris time) in a southwesterly direction. Shortly after passing the Greek coastline above the Aegean Sea, the aircraft made a quick U-turn to return to land, skirted the Pangea massif towards Kavala before crashing.

Several residents filmed the end of the Antonov’s flight overnight, already on fire before hitting the ground. “At 10:45 p.m. I was startled by the sound of an airplane engine. I got out and saw a plane on fire,” Giorgos Archontopoulos told public broadcaster ERT. On Saturday evening, people living within a 2 kilometer radius of the crash site were asked to stay at home and wear masks.

News Editor - July 17, 2022 0
For the Mexican Pia Camil, clothes are a material as political as they are sensitive, which questions identities and borders. The young artist, who...