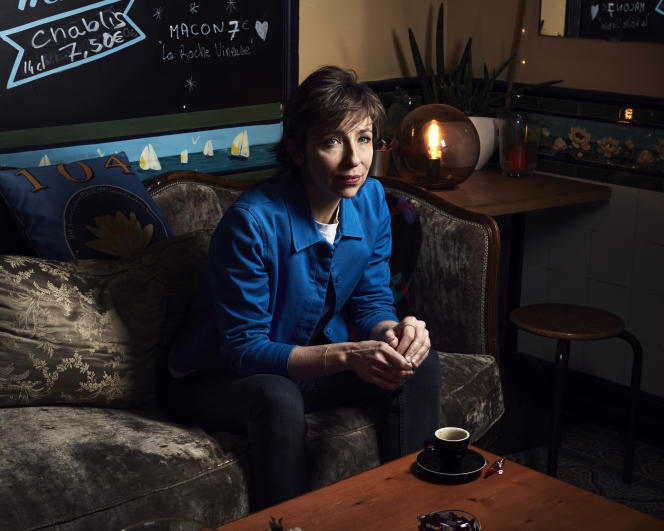 She arrived a little breathless, saying, “How long have you been waiting for me?” The voice, higher than on the airwaves, betrayed a slight concern. And then Cécile, the owner of Cent Quatre, greeted her with a “Hi Rebecca”. Rebecca Manzoni smiled and put her stress on the zinc for a moment. In this bistro in Saint-Ouen (Seine-Saint-Denis), a bit outdated with its moldings on the ceiling, its earthenware tiles, there is a reassuring impression of suspended time. “I like the atmosphere, this mixture of people who have lived there for a long time, others who have recently arrived, young people, old people”, says the one who settled here eight years ago in this suburb of “9-3 “.

It is around an espresso that the journalist is camped in a velvet sofa, at the back of the café. It’s going to be a long day, and she’s “afraid of being a little broke,” she apologizes. At the end of spring, she still hosts her weekly musical patch, “Tubes N’Co”, in the morning show of France Inter, every Friday at 7:20 a.m. And her show “Pop N’Co” on Saturday mornings, on the same antenna.

Barely a month later, Friday July 1st, while France Inter is slowly shifting into its summer schedule, Rebecca Manzoni sends us an evening text message: “This day was a turn of events but now it’s decided: I will present the cultural magazine at the start of the school year. No more rock and song, the forty-year-old will take over Augustin Trapenard and his “Boomerang” in September, on the morning slot 9:30-10 a.m. “I’m very excited but still leave the creation of ‘Pop N’ Co’ with a twinge in my heart,” she wrote.

For nine years, every Friday, Rebecca Manzoni inoculated listeners’ heads with a song that wouldn’t let go of the day after her “smile, it’s Friday.” Did she realize that? She denies. His laugh sounds like bells. “The power of a hit is that it infuses,” she says. It gives me great pleasure to get into people’s heads: having a tune that stays, that you hum in spite of yourself, it feels pretty good. »

Listening to an elsewhere

With these two musical presences on the air, the girl from Lorraine challenged herself to talk about popular music at prime time: “Passer Spacer, by Sheila, or a title by Nougaro on a channel of info like France Inter at 7:20 a.m. is to celebrate so-called modest pieces. Exploring the repertoire of the last fifty years was also, for her, encountering the soundtrack of an era. The journalist likes this romantic, political and playful side at the same time. She claims, however, that she did not invent anything: Rolling Stone magazine was already doing it in the 1960s. She did it “in her own way” and the listeners followed: 1.8 million on Saturday morning.

She did not see herself there, however, in the post, when she was a teenager in Villerupt (Meurthe-et-Moselle). It was in this small town near Longwy that she grew up. Parents teachers, him high school principal – an “old-fashioned father”, she specifies –, she a teacher, a little in the shadows. At home, there was a transistor in every room. France Inter already: “‘L’Oreille en coin’, listened to with the parents, ‘La Coulée douce’ and ‘Là-bas si j’y suis’, by Daniel Mermet, or the programs of Bernard Lenoir, these were stuff of mine that I used to listen to on my ghettoblaster. These are the journalists who made me love the radio, I dreamed of doing the same. For the shy young teenager, getting out of this traditional family setting meant listening to an elsewhere.

Her trajectory first led her to literary studies. The young woman arrives in Paris to join a hypokhâgne and then a history college. She ends up dropping everything when she meets, in the branch of Emmaüs where she gives French lessons for migrants, a sound recordist who offers her to visit the Maison de la radio. Passing by, in the long curved corridors, she points out the internship office. The next day, Rebecca returns, CV in hand, and camped in front of the door. “I waited until someone arrived. A few days later, I was called back for an appointment with Olivier Nanteau! It changed my life. A summer internship, then a replacement in production, a school of journalism and a failed fixed-term contract at RTL – “I broke four cars for them!” I wasn’t made for hard news, it’s not my thing,” she says, still laughing – before returning to the “round house” to join the Mouv’ team that Nanteau is creating.

When she tells, we find the warm voice, posed in the bass, which wraps you like a soft old sweater in the morning when you wake up. This playfulness, too, which makes her play with Nicolas Demorand, enlisted to give her the repartee on Aretha Franklin or Beyoncé.

It took almost twenty years for her to find her radio writing, her own tone. Before, there had been a comic strip chronicle in the cultural section at 9 o’clock, the program “T’as thought au parasol” – “When I listen to it again, it’s embarrassing but it was live every morning…” – then “Eclectik”, and finally the weekly morning pastille invented by Didier Varrod.

Since then, she has established herself with her very own way of taking apart a piece – the rhythm then the instrumental, the voice – in a very constructed sequence, live, where each sound illustrates the little story it tells. “One day my husband played me some recordings of Marvin Gaye and the Beatles with separate tracks, which he had found while surfing. I was sawn in front of these incredible sound docs. The columnist then chooses this way of playing with sounds that transports you to the recording studios of Detroit or Bristol, interfering between the newspaper and the weather.

She is also the first to highlight women in rock. Those figures who carried her, “shaped,” she says. “A Patti Smith in a man’s shirt holding her jacket over her shoulder on the Horses cover, or a Debbie Harry in heeled mules and a strappy dress singing Heart of Glass, it doesn’t seem like you’re welcome, but it was a way of saying “fuck you all”. Convinced that music played an important role in the image of women and their emancipation, the journalist seized on these figures to also tell this epic: Smith and Debbie therefore, but also PJ Harvey, Marianne Faithfull and d’ other more recent like Beyoncé or Rosalia. After

It is again this assumed feminism that holds her in her new project: the writing, for Arte, of Music Queens, a story of girl power in hits, but in a cartoon format. The twenty-episode series, produced with three girls (Emilie Valentin writing, Amandine Fredon directing and Leslie Plée drawing), will be broadcast from January 2023.

The end of the morning stretches out, the café is filled with regulars who stay away from the bubble of this back room that we occupy. She gets up on a last sentence: “Brassens said that the song is contraband propaganda. I really believe in it. This conviction, she still keeps it but will put it aside a little to conduct her cultural interviews. And rather than thinking about the end of her “Tubes N’ Co”, she says, she prefers to approach the succession of Augustin Trapenard as “the beginning of another adventure”.

Find all the “aperitifs with” here

Aperitif with Rebecca Manzoni: “It gives me great pleasure to get...

News Editor - July 10, 2022 0
She arrived a little breathless, saying, "How long have you been waiting for me?" The voice, higher than on the airwaves, betrayed a slight...

Football Euro 2022: Les Bleues in search of a first major...

Sri Lanka in the dark after the announcement of the resignation...