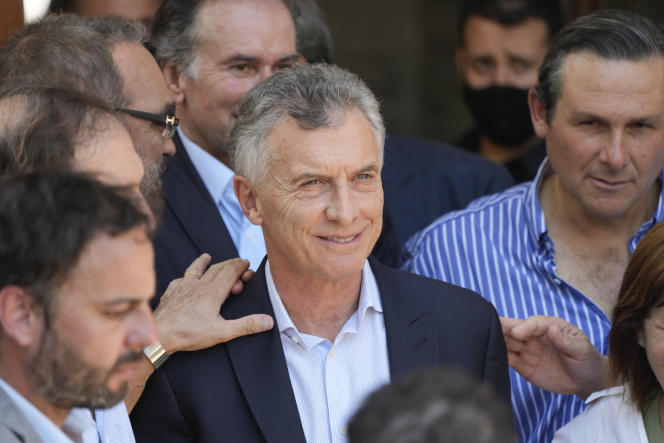 The tapping of the families of the victims of the sinking of the San-Juan submarine was not illegal and was intended to ensure the safety of the president. This was estimated by the National Appeals Chamber on Friday, July 15, when it revoked the indictment of former Argentinian President Mauricio Macri (2015-2019, right), accused of illicit espionage. The ship disappeared in November 2017 off the coast of Argentina. Found more than 900 meters deep in November 2018, his remains could never be refloated, despite the wishes of the families of the 44 deceased sailors.

“We consider that there is sufficient evidence to affirm that the activities carried out had the sole objective of presidential security and/or internal security, and for this reason were justified”, affirmed the three magistrates of the court, in reference to the information collected for months by the Federal Intelligence Agency (AFI) on the relatives of the victims, who had widely mobilized to demand the continuation of the search for the submarine and had led an intense campaign to know the truth.

On December 1, 2021, the former president was indicted by a judge in Dolores (province of Buenos Aires), who considered that the tapping and monitoring by AFI of the families had been intended to seek to “know their activities, the places where they met, their personal data and those of those around them”, with the aim of “influencing the political and institutional situation of the country”. “Illegal intelligence tasks, which were not based on legal authorization”, had argued the judge, before the case was referred to federal justice.

The families claimed to have been subjected to surveillance, telephone tapping and intimidation. At the end of 2017 and “at least all of 2018”, they knew they were “listened to”, explained in December to World Luis Tagliapietra, father of a missing sailor. “We spotted people infiltrating families who posed as relatives of victims, but also hacking of our e-mail addresses, spinning and taking pictures of us,” he reported.

The Dolores judge had released Mauricio Macri on bail of 100 million pesos (775,000 euros) and banned him from leaving the country. The ex-president has always firmly denied spying on the families and denounced political persecution. “Truth won. Truth can still win in Argentina. Let’s not lose faith,” Mr. Macri, 63, current executive chairman of the FIFA Foundation, tweeted on Friday, and who obtained judicial authorization in early July to travel to Switzerland and France.

Already indicted for other illegal tapping

Luis Tagliapietra considers the revocation of the indictment to be “grotesque”. The families of the victims announced that they would appeal the decision: “It’s a legal blow that makes us relive the same feeling that every time [we were given] a false daily report, at every meeting with national authorities and every false promise,” reads a statement signed by their lawyers.

“It was not justice that acquitted [the former president]. It was his friends who saved him,” Justice Minister Martin Soria tweeted, referring to two of the appeals chamber judges, Pablo Bertuzzi and Leopoldo Bruglia, who were appointed to the post without going through a competition. , as required by the procedure, during the mandate of Mauricio Macri.

It was not the first time that the ex-president had been implicated in this kind of affair. In 2010, when he was mayor of Buenos Aires, he had already been indicted for illegal wiretapping. An indictment which had followed the filing of a complaint by his own brother-in-law, Daniel Leonardo, in open conflict with the Macri family, and by Sergio Burstein, leader of the association of the Families of the victims of the attack against the mutual of Buenos Aires (AMIA), which killed 85 and injured 300 in 1994. Mauricio Macri was finally exonerated in December 2015, even before a trial could be held, a few days after taking office. as President of the Republic.