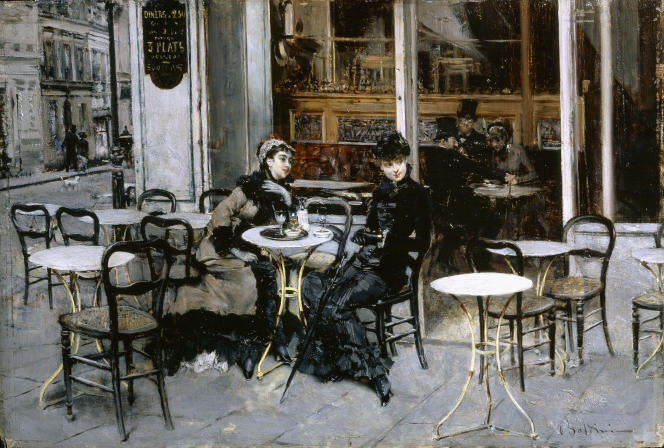 Continuing its policy in favor of 19th century artists reputed to be academic or socialite, the Petit Palais is hosting a retrospective of the painter Giovanni Boldini (1842-1931), born in Ferrara (Italy), who settled in Paris in 1871 and remained there. to his death. Boldini, whose father was a painter, showed his predispositions very early: at the age of 5, according to his biographers, it was already agreed that he would be a painter.

After his father, a Florentine portrait painter took him into his studio in 1864. In 1867, he already had a British patron and, in 1871, a London merchant. Then he went to Paris and went into business with Adolphe Goupil (1806-1893), art dealer and industrialist of the printed image, whose company, Goupil

He specializes in small-format pleasant painting: gallant – but modest – scenes, reworkings of Watteau or Lancret; Spanish with matadors and guitarists; Parisians with seamstresses in the parks; and country girls with dressy peasant women and laughing children. One cannot suspect him of worrying too much about the political and social questions which interest the naturalists, his contemporaries. Poverty has no place in his urban views, nor does prostitution. The vision it disseminates of Paris, touristy and picturesque, appeals abroad, where Goupil has little difficulty marketing it.

To these themes are added, in the 1880s, cafes and balls. On the motif or from memory, he draws theater audiences, like Daumier before him. This part of his work is the one that holds the most attention: his Amoureux au café, from 1887, and his Fête de fête au Moulin-Rouge, painted around 1889, slightly satirical, reminiscent of the representations of the same motifs by Forain or Toulouse. -Lautrec.

This Boldini is in turn one of the chroniclers of modern life, after Manet and Degas. And it shows: his 1882 portrait of conductor Emanuele Muzio borrows heavily from Degas’ views of orchestra and musicians a decade earlier. Around 1885, Boldini also drew a portrait of Degas in charcoal. He could have done the same with Manet, from whom he also borrows his taste for Velazquez and for Hals. But measuring yourself against Manet, as against Degas, is risky. This would have been verified if the exhibition had not avoided hanging, opposite the portrait of the journalist and deputy Henri Rochefort, by Boldini, around 1880, the one made by Manet, in 1881. We would have seen what is missing in the first: the audacity to transgress propriety and to prefer intensity of expression to minute likeness. His Rochefort is undoubtedly closer to anatomical truth, but that of Manet is alive, in motion, very nervous.

So we come to what makes up at least two thirds of the exhibition: the production of portraits, ladies of the best society, dressed by the best seamstresses, and gentlemen as it should be, also concerned about their appearance. The face, feminine or masculine, is treated diligently, in measured light, which softens the features. Blushes and powders are required, and the expression must be restrained, slightly smiling or vaguely dreamy. Around this retouched photograph of the head, Boldini deploys the pageantry of dresses, hats, feathers, scarves, laces and trimmings. He treats fabrics with sweeping brush strokes, without going into detail, launching curls and bursts of color. Out of incompleteness, he makes a fashion: the Boldini style, a demonstration of virtuosity.

But just look at one of these effigies for a moment to see what these princesses, marquises and dandies lack: a body. The fabrics float, with nothing underneath. It is also revealing that the only genre almost absent from the exhibition is the nude, in which Manet and Degas so strongly impose the physical presence of the figures, their density, their weight. No doubt Boldini was aware of this weakness, which he skilfully sought to conceal. Today, we only see this skill.