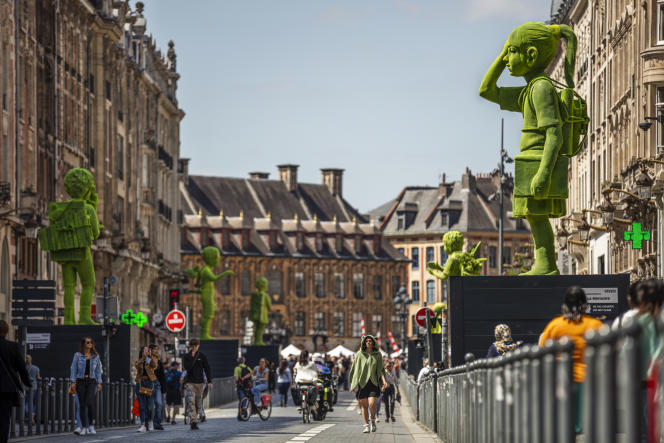 You can’t miss them, these enigmatic green giants installed in the very center of Lille: this “people of moss” from Finland and from the imagination of ceramist Kim Simonsson embodies the green wave of “Utopia”, sixth thematic edition of Lille3000, which places ecological concerns at the heart of its cultural ecosystem until October. It is about “raising awareness through art, touching and making people want to act”, sums up Martine Aubry, the PS mayor of Lille. The range of proposals for the event, which as always aims to be popular and unifying, is so vast and scattered that it is difficult to see everything. Overview of some salient events.

The tree, the forest, and more broadly man’s aesthetic as well as scientific attention to his environment have become central concerns of the Fondation Cartier pour l’art contemporain. It is therefore quite naturally that the Parisian foundation was invited to join this edition, with a carte blanche in the monumental Tripostal building. Opening with the screening of the film, as stunning as it is lyrical, La Nature (2020), by Artavazd Pelechian, “The Living” addresses above all the question of parity between humans and the rest of the living. With the complicity of the anthropologist Bruce Albert, the exhibition brings together some fifty artists and some 250 works from the collection (installations, videos, paintings, drawings, etc.), including recent groups of Amerindian artists. Their art, which visually translates their culture steeped in shamanism and accompanies their struggles against the invasion of their lands, aims to raise awareness of their way of life in cohabitation with nature.

The double cosmic snake, filled with air, which welcomes visitors to the courtyard is a work by the young Brazilian Jaider Esbell (also on the poster of the Tripostal), spearhead of the rights and visibility of indigenous struggles, tragically deceased few months ago. The Cosmic Serpent, DNA and the Origins of Knowledge (Georg, 1997) is the title of a book by Canadian anthropologist Jeremy Narby which underlines the curious parallel between the representation by shamans of all civilizations of serpents intertwined with the double helix structure of DNA. The exhibition draws this thread from the connection of shamans to the living from the side of artistic practice, described as “postshamanic” by sociologist Edgar Morin. The result is a heterogeneous and joyful exhibition, which brings together works that have in common a relationship to the real or the invisible in the order of vision, even hallucination: from the haunting motif imagined by the street-artist Jordane Saget to an installation by the great Giuseppe Penone, passing by a feathered bear by Paola Pivi, liquid pile-ups by Zevs or slices of backlit mica by Léa Barbazanges…

The Palais des Beaux-Arts takes on the air of undergrowth for a labyrinthine and sound exhibition that focuses on the forest as a refuge for the imagination, its representations and the ecological prescience of artists concerning it. The semi-obscurity conglomerates the most varied media, from ancient painting and sculpture to cinema, digital art and video games. Canopy of the project, in the central atrium, a vast structure brings a more militant aspect to the whole: it is a presentation of the utopian project carried out by the botanist and biologist Francis Hallé (who can be found in the exhibition “Les Vivants”): reconstructing a primary forest in Western Europe. Or the creation of a large area (approximately 70,000 hectares) in which a forest can evolve over the long term in an autonomous way, renewing and developing its fauna and flora without human intervention. A cry of alarm from the scientist, author of the Praise of the Plant (Seuil, 1999) and the Plea for the Tree (Actes Sud, 2005), in the form of a concrete solution both to preserve biodiversity and to protect human life.

The “novacene” is a new era envisioned by British environmentalist James Lovelock that would succeed our current geological era of the Anthropocene, dominated by human activity. This utopian thesis, which prophesies the advent of a virtuous relationship between humans and their environment, is the starting point of the twilight exhibition, which above all underlines the path to be traveled through some fifteen spectacular installations. Do not miss the most intimate and poetic encapsulations of clouds by Marie-Luce Nadal, as well as the delicate phantom cabaret by Bianca Bondi, as if reappearing in a torrential wave, in the small building located near the entrance to the site.

Those who want to see that you can create, like Laurent Tixador, a power strip with waste collected by the sea or a functional solar chip shop even in the event of rising waters (imagined by the Belgian Philémon Vanorlé) can visit “This sea ​​that surrounds us” at Espace Le Carré. Fans of Fabrice Hyber – already present in “Les Vivants” with an earthen body irrigated with water and in “Le Serpent cosmique” with a garden Ted Hyber -, will aim for “POF”, his personal exhibition full of dissonant fantasy at The secu.

Also to be discovered: the little pink Edens designed by the young Pauline Di Valentin (Espace Edouard-Pignon) or the disconcerting olfactory installations by the Belgian Peter De Cupere (Sainte-Marie-Madeleine church and Maison Folie Moulins). With children, don’t miss the turbulent Nanitos, with vegetable heads, by Jean-François Fourtou at the Hospice Comtesse or his amusing Maison du Maxitos, giant and XXL furnished, on the lawn of the Comtesse islet.