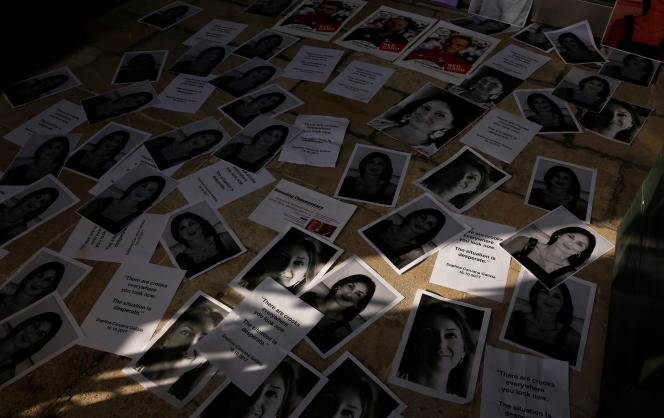 The man accused of murdering Maltese investigative journalist Daphne Caruana Galizia by trapping her car in 2017 admitted to the facts in an interview with Reuters from his cell, published on Tuesday July 5. George Degiorgio, one of the suspects, assures that he will soon denounce other people involved in the case. Until now, he hadn’t made any public statement about the assassination, but spoke out in preparation for a podcast about the case titled Who Killed Daphne?

George Degiorgio believes that if he had been better informed about his target, he would have demanded more money for this “contract”. “I would have asked for 10 million, not 150,000” euros, he said in reference to the sum he says he collected to kill the journalist, while being, “of course […] sorry”. “For me, it was just work. Yeah, the usual job,” he said. Asked about the defendant’s remarks, the journalist’s son, Matthew, who has been campaigning since the murder to seek justice, told Reuters that “the very words of George Degiorgio show that he is a cold killer who deserves no leniency.”

He will plead guilty for a reduced sentence.

Lawyers for George Degiorgio have been trying since last year to negotiate a pardon in exchange for a confession to his role in the murder of Daphne Caruana Galizia and other crimes that may involve prominent figures in Malta. But the island’s appeals court on June 22 dismissed Mr. Degiorgio’s final appeals against the charges against him and his co-accused brother Alfred, removing the final hurdle to a trial. The Maltese prosecutor’s office accuses the Degiorgio brothers and an accomplice, Vincent Muscat, of having planned and committed the murder of Daphne Caruana Galizia on October 16, 2017, by planting a bomb under a seat of her car at the request of a wealthy man island business.

George Degiorgio told the news agency that he would plead guilty if brought to trial. “I’ll talk to the judge,” he added. He also said he was ready to testify against a high-ranking Maltese political figure who had tried to organize the murder of Daphne Caruana Galizia two years before her assassination. George Degiorgio would also offer to testify about the involvement of two ex-ministers in an armed robbery. He hopes to negotiate a reduced sentence for himself and his brother but also so that “we are not the only ones to fall”.

These people implicated by George Degiorgio all deny their involvement in any crime whatsoever, according to the press agency which prefers to preserve their identity. At this stage, neither the Maltese police, nor the prosecution, nor William Cuschieri, the lawyer for the Degiorgio brothers, wished to add any comments.

The Degiorgio brothers had so far denied any involvement in the assassination. In fact, arrested two months after the assassination, George Degiorgio had made no statement to the police, even refusing to reveal his identity during his first interrogation. He had remained silent while his lawyers multiplied the steps to contest the validity of the documents implicating him in the file. Vincent Muscat, co-accused, admitted that he was guilty of this murder in 2020 before being sentenced to fifteen years in prison, a reduced sentence in exchange for his testimony on this file and other crimes.

One of Malta’s richest businessmen, Yorgen Fenech, was also charged in November 2019 for recruiting George Degiorgio and his two accomplices. He denies all the charges against him. In a statement, his attorney, Gianluca Caruana Curran, said Yorgen Fenech wanted to prove that “at no time did he desire, actively seek or sponsor” the assassination of Daphne Caruana Galizia. “While emphatically protesting his innocence, Mr. Fenech maintains that with the evidence available, an independent and serious investigation may lead to the arrest and incarceration of those truly responsible for the assassination,” he said. said.

Yorgen Fenech was first identified as a possible mastermind behind the murder in a series of articles published in November 2018 by Reuters and the Times of Malta daily. These articles identified him as the owner of a company called 17 Black which Daphne Caruana Galizia accused, without being able to prove it, of corrupting politicians. She was killed after uncovering a series of corruption cases involving high-profile figures, including several ministers from the then-ruling Maltese Labor Party.

News Editor - July 5, 2022 0
The man accused of murdering Maltese investigative journalist Daphne Caruana Galizia by trapping her car in 2017 admitted to the facts in an interview...