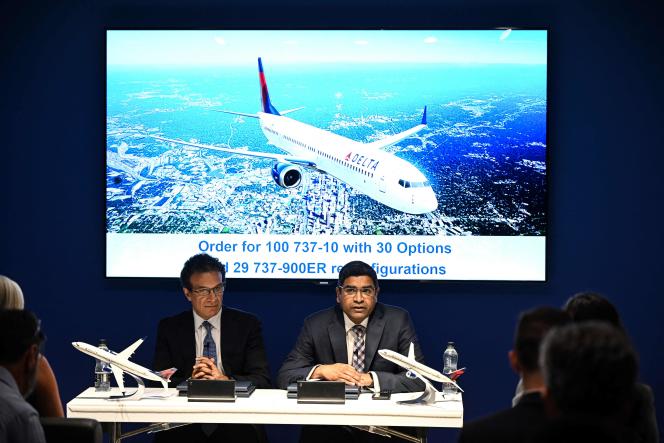 The Farnborough International Air Show, which opened its doors under a blazing sun on Monday, July 18, in the greater suburbs of London, is an opportunity for Boeing to find a little smile. At the opening of the event, the two latest products from the aircraft manufacturer from Seattle (State of Washington), the single-aisle 737 Max and the long-haul 777X, were able to fly without difficulty in the skies of London. Better, Boeing has also started to fill its order book.

The company has notably announced a major contract with the American company Delta Airlines, which has committed for one hundred 737 Max and around thirty additional optional aircraft. An order valued at nearly 13.5 billion dollars (13.3 billion euros) for Boeing, which is still far behind its rival Airbus. Indeed, the European aircraft manufacturer’s order book is full, with more than 7,000 planes to produce, i.e. nearly ten years of guaranteed work, while Boeing has in its holds “only” 4,239 planes to be delivered.

At Farnborough, the small improvement of the American manufacturer even had the gift of delighting its competitor. With a certain irony, an Airbus executive exclaimed: “The more 737 Max they sell, the less they will want to launch a new plane. It is no coincidence that Airbus is in the lead with more than 60% market share. The group chaired by Guillaume Faury has the most complete range, from the smallest single-aisle A220 to the long-haul widebody A350. Above all, Airbus launched the A321. An aircraft without equivalent at Boeing, which succeeds in squaring the circle: to offer the capabilities of a long-haul, but with the costs of a medium-haul. An aircraft that is particularly popular with low-cost airlines, always looking for savings.

Boeing has long held out the threat of a retaliatory response with the launch of a potential mid-market rival to the A321. The American would have given it up, because it was too expensive to build. Above all, such a plane would arrive on the market too late, towards the end of the decade, i.e. just a few years before the new generation planes, hoped for in 2035. with hydrogen or with so-called sustainable kerosenes.

Somewhat cheered up by the performance of its 737 Max, Boeing does not yet see life in pink. Its forecast of aircraft needs for the next twenty years, published on Sunday July 17, is down from 2021. By 2041, the American manufacturer predicts that airlines worldwide will need 41,170 aircraft, representing a total turnover of 7,200 billion dollars. For the second consecutive year, the group is therefore revising its outlook downwards. A year ago, the aircraft manufacturer was still targeting 43,610 aircraft by 2040. Among the reasons given, the economic situation, which is worse than expected, but also the consequences of the war in Ukraine.

In fact, the sanctions against Russia cause manufacturers, mainly Airbus and Boeing, to lose 1,500 aircraft. Nevertheless, even a little more cautious from one year to the next, the American remains even more optimistic than his European competitor. Shortly before mid-July, Airbus said it estimated the airlines’ new aircraft needs at 39,490 aircraft over the next twenty years. In 2041, he is counting on a world fleet that will have doubled. For its greatest benefit, because 80% of orders will be for medium-haul and only 20% for long-haul jumbo jets. Unsurprisingly, it is Asia, mainly China and India, which will capture 40% of new aircraft needs.

News Editor - July 18, 2022 0
The Farnborough International Air Show, which opened its doors under a blazing sun on Monday, July 18, in the greater suburbs of London, is...

Steve Bannon, close to Donald Trump, tried for his refusal to...