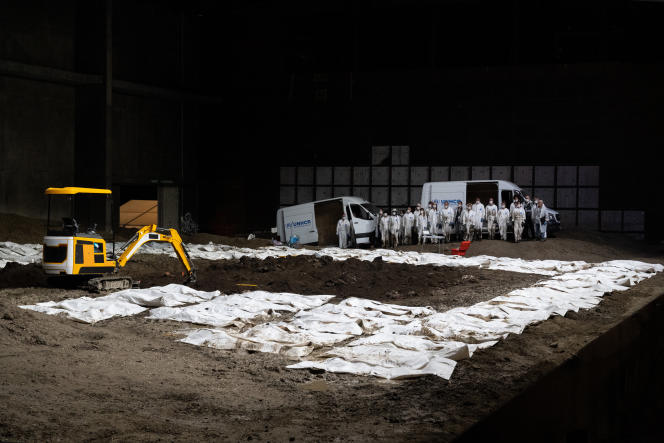 Closed to the public since 1998, only four years after its opening, victim of years of looting and degradation before being walled up like a tomb, the black concrete Stadium designed by Rudy Ricciotti haughtily presented his bad boy profile in the golden sky of Vitrolles (Bouches-du-Rhône), on this Monday, July 4, which marked the opening of the 74th Festival d’art lyrique d’Aix-en-Provence.

Impossible to imagine, visiting a few weeks earlier, the imposing building partially rehabilitated in industrial wasteland by the convergence of tutelary struggles (State, region, metropolis, city and festival) that the “Kaaba de Vitrolles”, as it was nicknamed in their ephemeral time, the frontists, would draw such a large audience into its red bauxite decor, visibly exhilarated by this expedition to a land of architectural austerity, far from the cocoons that usually welcome opera spectators. Art finally restored to its revolutionary status?

Already depositary in 2019 of a powerful but questionable Requiem, by Mozart, given at the Théâtre de l’Archevêché, in Aix-en-Provence, the director Romeo Castellucci resumes, with “Resurrection”, Symphony n ° 2 in C minor , by Gustav Mahler, his vision where he had left it. The Mozartian finale, in a spectacular verticalization of the stage, like that of a dumpster, delivered the men to engulfment, of which only scattered clothes and trampled earth remained. This time, it’s a huge quagmire punctuated by tumulus and fill – 550 tons hauled, ocher earth from the Durance, black peat from Latvia – which has invaded the vast plateau of the Stadium.

Discovery of a mass grave

The cries of the swifts, amplified, tear the silence, while a magnificent white Boulonnais, Rustique, entered the garden alone, causing a surge of surprise in the public. He will graze slowly before being called by his caretaker. The world’s dream of beauty fades away to make way for the filthy: the discovery of a mass grave.

The music hit unexpectedly, the shock of the bass punching out the opening theme of the first movement, Totenfeier – “funeral”. An impact all the more powerful since, from the bleachers, we see neither the conductor nor the string desks, but only the plethoric army of winds (woodwinds and brass) and percussion surrounded by the gigantic crowd of the choir, men at court, women at garden.

On the set, the teams of the United Nations High Commissioner for Refugees deployed men and women in white coveralls and blue latex gloves. The first dead exhumed, of a studied realism, has Christic allures. He will be lying on a white cover. The ballet of scientists, doctors, forensic photographer, disembarked from large trucks over different musical sections, responds to the motionless dance of the dead emerging from the black gangue of anonymity.

The Castellucian installation – we cannot speak of staging or even staging – will continue ad nauseam throughout the four other symphonic movements, more than an hour and a half. A hint of ländler, this dance in three beats of popular origin, irrigates the second movement, while a smell of wet earth rises. The symphonic space has been lightened to give way to the procession of a mortuary nursery. Infants are gathered in the proscenium, before being passed from arm to arm for a final swaddling.

As at the very beginning of the show, where the olfactory signage saw everyone cover their noses, the use of children’s corpses weakens the subject of a sentimental voyeurism whose naivety surprises and disappoints. It will be the same with the nauseated young woman from the beginning, stubbornly continuing to dig in an expiatory trance even when the hundred or so bodies, lined up, numbered and placed in shrouds, have been loaded into the vehicles.

Meanwhile, at the head of an Orchester de Paris des grands soirs, Esa-Pekka Salonen will have spun straight the Scherzo, written from the lied taken from the Knaben Wunderhorn, which recounts the useless sermon of Saint Anthony of Padua to the fishes. Carried by the sublimely carnal voice of Marianne Crebassa, the arrival of Urlicht (“original light”) is like an opening to hope. The gaze turns away from the ground, questions the sky. On the set, muddy dead dressed in white and living stained with earth share the same mental space of a resurrection without the transcendence, which the music will now carry.

Despite an intrusive sound system, which sometimes gave the score the dematerialized look of an immersive soundtrack in a cinema multiplex, the final apocalyptic will sign the victory of the music, choirs and musicians united in a rare and fervent emotional power under the direction of the Salonen magician. On the stage, returned to the silence that follows the battles, a curtain of rain – lustral water? – fell down.