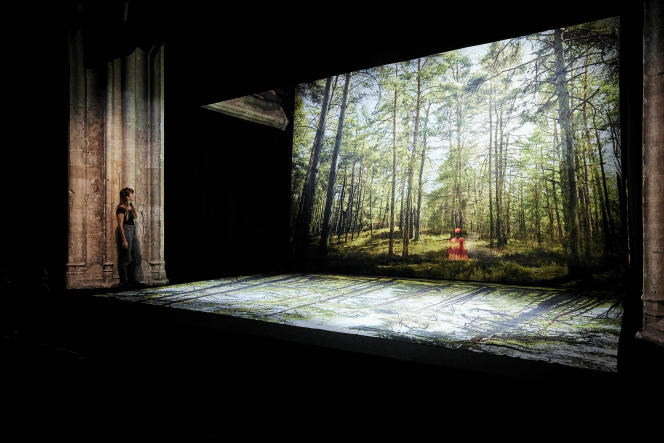 How to represent the sunrise? Pure, clear blue? The shrill chirping of birds upon waking? These questions are not asked and answered by an “adult” show at the Festival d’Avignon. But a piece called “for children”, or “all audiences” – as they say: a version of Little Red Riding Hood proposed by the collective Das Plateau, led by the director Céleste Germe.

For fifteen years – since Joël Pommerat and Olivier Py, as precursors, revolutionized the art of staging tales – the theater for young audiences has become a wonderful playground for explorers of forms. The Das Plateau collective, which also creates shows for adults, and forms of intervention in the public space, is part of this line. He offers a delightfully inventive version of this story that everyone thinks they know by heart.

Thinks he knows, yes: like all tales, the Hood has undergone avatars over time and rewrites, which do not all tell the same thing. Das Plateau starts from the version of the Brothers Grimm, and not from that of Charles Perrault, which is generally known in France, and which is much more moralizing and normalizing for little girls than that of the Grimms, which is already the harbinger of psychoanalysis.

In other words, in this version, our little Chaperon is much more combative and does not let the Wolf tell him. Well, not to the end, at least: first seduced, she goes wandering in the forest with him, and it will be bad for him. But when she understands who she’s dealing with, we won’t blame her again, she will have learned to defend herself: in the version of the Grimms put in the sauce of Das Plateau, the initiatory dimension takes precedence over bourgeois morality and 19th century patriarchy.

This freedom acquired by Little Red Riding Hood is found on the set, which takes you on an immersive journey and a nice game of mirrors, diffractions and doubles. Nothing is told in a flat realistic way. We are like in a vast children’s game, who would have in their hands all the means of today’s theater to create their imaginary world. The forest is infinitely thrilling and deep, thanks to a system of one-way mirrors, screens and video projections. The Riding Hood is both an archetypal figurine, life-size, and played by an adult actress – Maëlys Ricordeau, excellent at this game. Ditto for the Wolf, endorsed by Antoine Oppenheim.

The tale is distanced – one could almost wish it was a little scarier, but the show is deliberately designed for children aged 4 and up to watch. It is attractive like one of these books of images in relief, which would have come alive and would have taken on the dimension of the stage of the theater. We sink happily into this forest, where the visible and the invisible go hand in hand, to the lively, dancing rhythm of an intrepid little girl.