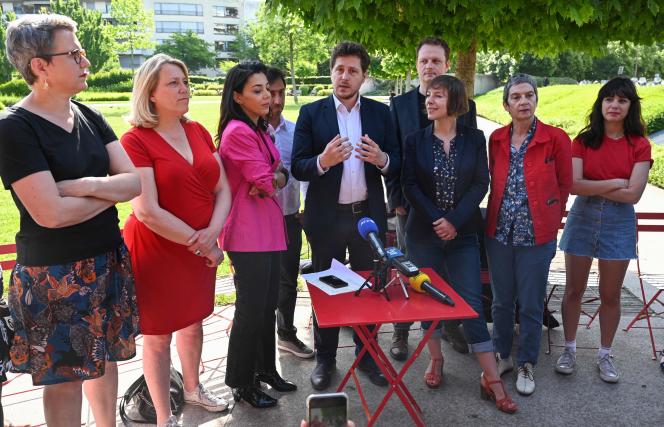 The leader of La France insoumise, Jean-Luc Mélenchon, threatened to file an appeal to the Council of State in summary proceedings, Tuesday, May 17, so that the New Popular Ecological and Social Union (Nupes), resulting from the agreement between several left-wing parties, can be attributed as a political nuance to the candidates in the legislative elections.

Traveling to Nantes, Jean-Luc Mélenchon criticized the political color chart of the Ministry of the Interior for the elections of June 12 and 19, which separately presents La France insoumise, the Socialist Party, the ecologists and the French Communist Party. A treatment also applied to the right, The Republicans and the Union of Democrats and Independents (UDI) being distinguished on the form to be submitted to the prefecture, despite their political alliance under the same banner in several constituencies.

Unlike the label, chosen freely by the candidate, the political nuance is assigned by the prefecture and the Ministry of the Interior after the submission of the application files to the administration. It is this nuance that will be used to present the results on the evening of the first and second rounds of elections, on June 12 and 19. For the left, the stakes are high, even if the Nupes agreement prefigures neither the possible parliamentary groups formed in the next National Assembly, nor the cohesion of the votes on the texts of laws, throughout the mandate. .

Jean-Luc Mélenchon denounced, in Nantes, “a system of permanent deception” on the part of Macronie, aiming “to be able, on the evening of the first round, to reduce the breakthrough that we will have made”. In a press release, the Nupes denounced an “electoral tampering” and regretted that “the macronist camp has decided to separately count the votes collected by candidates from LFI, EELV, PS or PCF”.

Unlike Ensemble!, a collective bringing together several parties close to the presidential majority, Nupes was not set up as an association for financing the campaigns of invested candidates: they must therefore tick their party of origin (La France insoumise, Socialist Party, Europe Ecologie-Les Verts, French Communist Party, Générations s) when declaring their attachment to benefit from public aid and the audiovisual campaign – which includes the distribution of speaking time according, in particular, to the political weight of the formations.

According to a ministry circular dated May 16, the New People’s Ecological and Social Union shade was not created because it “brings together candidates invested independently by the parties associated with this agreement”, which “tends to demonstrate the will for these candidates to remain attached to their party of origin”. “These parties present themselves independently, as evidenced in particular by the associations declared under public aid and the audiovisual campaign”, notes the circular.

“It is extremely worrying, we dispute the circular of the Ministry of the Interior”, denounced, Tuesday, Julien Bayou, national secretary of Europe Ecology-The Greens and candidate in Paris, during a presentation to the press of all the candidates of the Nupes in the capital. He sees it as a “perfectly scandalous maneuver”, aimed “to deceive the rendering of the result of the first round”, since it is this political nuance that is used to analyze the results.

“They seek to lower our score, presenting us as divided,” added Aminaté Niakaté, Nupes-EELV candidate. “They are trying to erase us even in the texts”, also denounced Sophia Chikirou, Nupes-LFI candidate, specifying that difficulties had been noted in particular in Ariège and in the Rhône.