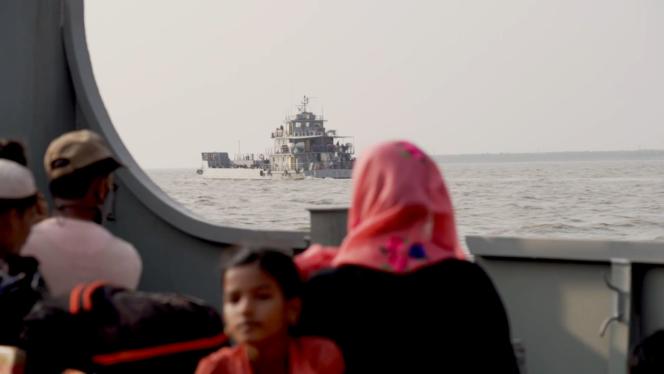 A military convoy of six boats is heading towards Bhasan Char, with 3,000 refugees on board. Located four hours away by sea, in the middle of the Bay of Bengal, nicknamed “prison island”, this military base has been transformed into a reception camp for the Rohingya, the Muslim minority hunted down in Burma. Victims in 2016 and 2017 of terrible persecution perpetrated by the Burmese army, 740,000 Rohingya had fled to Bangladesh.

Bhasan Char already has 23,000, and Dhaka hopes to transport 100,000 in total, to relieve congestion in Cox’s Bazar, a port city in the south-east of Bangladesh, on the Burmese border, which has become the largest refugee camp in the world, where crowd over 1 million Rohingya.

For the first time since the camp opened in December 2020, Bangladesh has allowed a Western team to travel to Bhasan Char. The aerial images are striking: a horizon of identical barracks that inevitably evokes a detention camp.

Without the right to leave

In addition to its prison character, the island is vulnerable to cyclones, and it is not certain that the dam built will be enough to protect its residents. The report, by Mathilde Cusin and Alban Alvarez (Babel Doc), shows the living conditions of the refugees, both on Bhasan Char and in Cox’s Bazar; a stateless life without horizon. The viewer will doubtless hesitate to prefer one to the other…

Upon arriving on the island, families are assigned a personal space, hard, with windows, sanitary facilities, sometimes even a piece of land, but without the possibility of working, without access to education and above all without the right to leave. “We don’t know how long we will stay here. Bangladesh will take us where it decides,” explains Mounir, who has been living for thirteen months with his wife and their three children born on the island.

The man already regrets having made the journey. He previously lived in Cox’s Bazar, where he nevertheless suffered the law of gangs. This gigantic camp of terrible promiscuity which extends over 30 square kilometers is less guarded, but it is plagued by violence, drugs and insecurity. The refugees have built their own bamboo houses, precarious habitats subjected to torrential monsoon rains and the risk of fire.

The leader of Bhasan Char makes it clear: the government of Bangladesh does not want to allow the Rohingya the freedom to come and go, for fear that these refugees will mix with the population and eventually integrate: “Otherwise they will be reluctant to go back home. This is not what we want. Their country remains Burma. We hope to repatriate them soon. What we are asking the United Nations, UNHCR and other countries is to help Bangladesh to repatriate them. The negotiations are at a standstill.

News Editor - May 22, 2022 0
Canadian authorities announced on Saturday, May 21, the deaths of four people in the east of the country, hit by violent storms which also...

Ligue 1: OM on their way to the Champions League, Saint-Etienne...