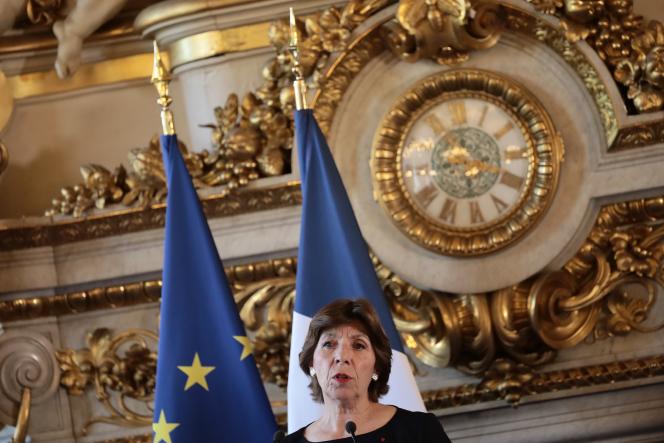 The strike at the Quai d’Orsay, announced for Thursday, June 2, promises to be well attended. For a few days, under the hashtag

A dozen ambassadors, including Véronique Aulagnon, in Oman, or her counterparts in Kuwait and Cyprus, have announced their intention to strike. Several senior officials, such as Philippe Bertoux, Director of Strategic and Multilateral Affairs, will do the same. Many others, like Anne Guéguen (North Africa-Middle East) shared the text, without specifying their personal choice. The appointment at the head of the ministry of a career diplomat, Catherine Colonna, very discreet so far on this burning issue, has not, at this stage, succeeded in calming the spirits.

The strike notice was filed by a large inter-union, in connection with the group of young diplomats at the origin of the platform. The CFTC, the FSU, Solidaires and the CGT support the movement, while the majority union, the CFDT, stays away. “This reform reflects an incomprehensible desire to undermine our ministry, at the risk of permanently weakening our country’s ability to project and defend itself in the world”, underlines the inter-union.

On Thursday, rallies will be organized on the Esplanade des Invalides, opposite the headquarters of the ministry, in Paris, as well as in Nantes, where the diplomatic archives and the civil status of French people living abroad are located. The unions still suggest convening “trades meetings” of the ministry. An idea that Ms. Colonna could take up.

Unprecedented, the mobilization is at the height of the revolt which seized the ministry against the overhaul of the senior civil service carried out under the leadership of the Elysée, against the initial opinion of the former Minister of Foreign Affairs, Jean – Yves Le Drian. The approximately 800 senior civil servants directly affected by the reform come from the two bodies placed in extinction, that of foreign affairs advisers and that of plenipotentiary ministers; they will be encouraged, from January 2023, to join a new interministerial pool, the body of State administrators, as well as prefects and finance inspectors. Their fear is twofold: having to leave diplomacy to pursue their careers, while facing competition for the most prestigious positions from candidates who are not diplomats and who are not very seasoned in the march of the world.

Until now silent, personalities have come out of their reserve to attack the project. “It is vital to give up on the reform, because it will profoundly transform the diplomatic corps, from the moment when the most beautiful posts will be awarded for non-diplomatic reasons, at the risk of great politicization”, indicates Dominique de Villepin, former prime minister and patron of the Quai d’Orsay under Jacques Chirac.

In order to limit the scale of the movement, the management of the ministry highlights the guarantees negotiated in recent months. The very selective Eastern competition will be maintained, in order to recruit polyglot executives, experts in rare languages. Bridges and promotions will be set up for foreign secretaries, category A executives whose corps is not abolished, but who are worried about the impact of the reform on their careers.

As for the senior civil servants at the heart of the overhaul, they will be able to choose to remain in their former body or join the ranks of State administrators. “We must demolish the idea that the diplomatic corps would be abolished”, explains a source familiar with the matter, “the difficulty in convincing is however that we do not yet know all the rules of operation of the new body”.

Whatever the actual mobilization, the atmosphere is electric, as evidenced by the setbacks encountered by a personality like Hélène Farnaud-Defromont. Approached to become diplomatic adviser to Prime Minister Elisabeth Borne, she was dismissed without explanation on May 25. By order of the Elysée? The former director general of the administration of the ministry had made no secret of her reservations with regard to the construction site in progress, by refusing in the summer of 2021 to become inspector general of foreign affairs.