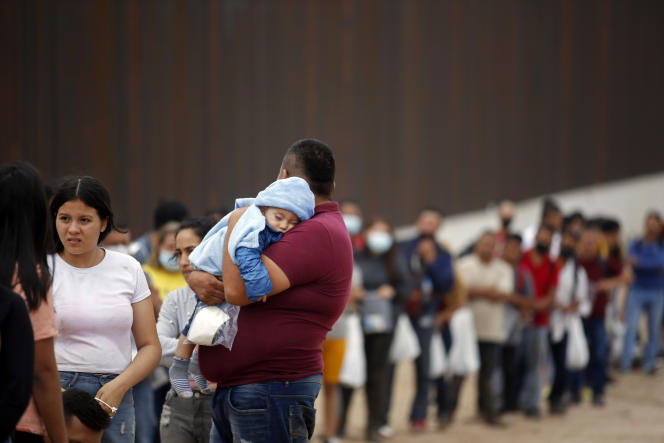 A federal judge in Louisiana prevented, on Friday May 20, the administration of Joe Biden from lifting a health measure implemented by the Trump administration during the pandemic to be able to deport without delay migrants crossing without visas the land borders of the United States . The authorities wanted to lift on May 23 this device called “Title 42”, very controversial because it notably prevents asylum seekers from formulating their request, but the Republican governors of 24 states opposing it had taken legal action.

“The court concludes that the plaintiff states have met the conditions” to obtain its provisional maintenance, wrote Judge Robert Summerhays in his decision on Friday. These “complainant States” claim in particular that the lifting of this measure would cause an upsurge in border crossings and consequently an increase in the number of migrants residing illegally on their soil. The Biden government immediately announced its decision to appeal.

Title 42 is a public health measure that was enacted in 1893 to protect the United States from the numerous cholera and yellow fever epidemics that were occurring at the time. It was very rarely implemented thereafter. In March 2020, the government of former President Donald Trump activated this health system which allows the immediate expulsion of migrants without residence permits arrested at land borders.

This measure is applicable immediately and does not allow legal recourse, even for those who wish to file an asylum application. Rare exceptions are provided for, for certain nationalities such as Ukrainians since the invasion of their country by Russia, or for unaccompanied minors. Since coming into force, the device has been used more than 1.8 million times.

Human rights activists feared the maintenance of “Title 42” which, paradoxically, according to them, translates into an upsurge in attempts to illegally cross the border with Mexico. Because there are no legal or judicial consequences for migrants expelled under this system, who can try their luck as much as they wish. But accidents – dehydration in the desert, drowning, falls while crossing the wall – cause many injuries and deaths, they lament.

The States which wish to maintain the “Title 42” evoked for their part apocalyptic figures, saying that the number of attempts to cross the border would jump from 7,000 per day currently to more than 18,000 if the health measure was lifted. They assure that many of these visa-free migrants, of whom 30,000 to 60,000 are believed to be massed in northern Mexico to wait for the opening of the border, would escape arrest by border guards.

The Biden government had admitted in early May to expect a massive influx of migrants, but the Minister of Homeland Security, Alejandro Mayorkas, had said he was ready to manage this pressure at the Mexican border. He also hammered home a clear message to would-be illegal immigrants: “Don’t come.”

In the last three weeks of April, US Border Patrol apprehended an average of 7,800 migrants each day. This is almost five times more than the average of 1,600 migrants recorded between 2014 and 2019, before the pandemic. A few months before the midterm elections in November, Republicans and Democrats agree that there is a problem.

The White House speaks of a “broken” immigration system that Congress needs to fix, while his Republican opponents accuse Mr. Biden of failing to protect the country’s southern border.