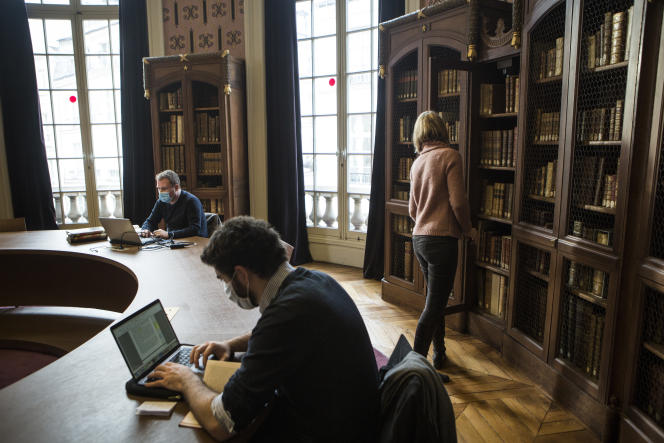 It is difficult nowadays to identify the new paths of literary research. The whole point of the symposium organized in Charenton-le-Pont (Val-de-Marne) on May 23 and 24, under the title “The Writing of Research”, was precisely to explore one of the most stimulating, located at this crossroads where critical discourse is no longer content to comment on facts or texts, but is invented in original forms.

Professor at CY Cergy Paris University, Violaine Houdart-Merot, at the origin of this colloquium, contributed to the development in France of writing workshops, in which students read the classics or exchange with authors with a view to writing in their turn. However, she underlined, if creation is now taught, it is partly because we no longer consider it necessary to oppose objectivity of reflection and subjectivity of invention, neutrality of analysis and originality of style. In what sense, then, can research be said to be written?

In a sense, first, methodological. The writer Pascal Quignard spoke of language as a “burrowing instrument”. This metaphor, Violaine Houdart-Merot made it the red thread of these two days, taking as an example the way in which Vinciane Despret uses fiction in Autobiography of a octopus (Actes Sud, 2021), in order to give us to imagine the messages that animals send to us – a way for this philosopher trained in ethology to radically decenter our point of view on the living.

Even before philosophers or historians, very inclined, underlined Isabelle Lacoue-Labarthe, of the University of Toulouse-II-Jean-Jaurès, to the autobiographical temptation (as evidenced by the success of what Pierre Nora had called the ” ego-history”), anthropologists were among the first to question their relationship to language(s). This, recalled Eléonore Devevey (University of Geneva), because of their research material, namely the words of their informants or the collective accounts of a culture.

We understand then that the impersonality expected of a researcher could have been transformed into an epistemological obstacle. Eléonore Devevey mentioned in particular the case of Jeanne Favret-Saada, led to become totally involved in her research on witchcraft in Mayenne (Les Mots, la mort, les sorts, Gallimard, 1977). Initially, the anthropologist saw it only as an object of study, but she gradually discovered matters of life and death for the individuals interviewed. Investigating involved being required “as an agent and seat of speech, affects, and desires.”

Such advances have had important repercussions even on the most constrained academic exercise: the thesis. Claire Bodelet, a young sociologist, said that she chose, to study the role of clowns in the hospital, to take it on with the children, without hiding from the jury of her thesis the stages of her learning, her successes, but also her failures. . The very writing of his thesis became a kind of investigation within the investigation, essential to restore the inventiveness of a comic word, made of onomatopoeias, neologisms and metaphors, where writing became a vector of critical reflection. .

Abandon any preconceived idea of ​​literature

Nevertheless, from the moment when words become an issue, don’t we switch to the side of literature? Therein lies the second, aesthetic sense of what is meant by “research writing.” From the mid-1960s, Roland Barthes had claimed the possibility of access to creation for the critic. The writer Philippe Forest, interviewed on the second day by Sophie Jaussi, who devoted an essay to him this year (Philippe Forest, the other side of knowledge, Kimé, 552 p., €38), described his two careers : academic (in Nantes) and literary (at Gallimard). Although they are not the same – his job as a professor remains, he agreed, a “second job” – they both feed off each other, insofar as fiction provides access to a truth foreign to reason, waiting however to be recaptured by the genre of the essay.

Making criticism a real creation then implies going further. Like fragmenting classic works into a multitude of potential texts that it would be possible to extend, in theory but also in practice, as Sophie Rabau had done in Carmen, for a change (Anacharsis, 2018). Or conversely to abandon, as Nancy Murzilli (Paris-VIII) proposed, any preconceived idea of ​​literature, and to invent situations where everyone regains confidence in the value of everyday language.

Where it seeks itself, revealed these two days, critical thought is not torn off ex nihilo, but is formed on the very surface of words.