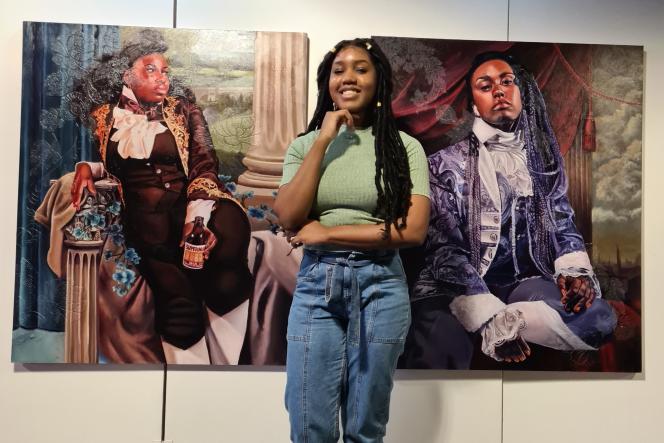 Do you know Abram Petrovich Gannibal? In this painting, painted in 1707, he appears as a black child, in the service of Tsar Peter the Great. With a paternalistic hand, the Russian emperor signifies both the affection he has for her, but also an obvious feeling of possession.

The young slave, probably from Lake Chad, will climb the military ranks to the rank of general. His eldest son, Ivan, founded the city of Kherson (today in Ukraine). One of his younger brothers, Osip, was the grandfather of the famous poet Alexander Pushkin.

Here is one of the many black figures listed by Glory Samjolly on her Instagram account @blackaristocratart. “The life of black people is not limited to servitude on the plantations”, insists the young British artist of 24 years, who has 67,000 subscribers. And to add: “Slavery has existed from time immemorial, at the time of the Egyptians, the Romans or the Ottomans. But no one has the idea of ​​seeing these peoples only through this prism. »

It all started in 2014, when Glory Samjolly discovered a novel retracing the story of Dido Elizabeth Belle, one of the few black English aristocrats in the 18th century. For the teenager born to a Jamaican mother and a father from Sierra Leone, it is a revelation mixed with trouble. No one at school had ever spoken to him about such figures.

But it was only later, at the University of London, that the young woman learned to put words to her discomfort. In the museums of ancient art that she adores, she sees no figure with whom she could identify. Art history was written by whites, condemning blacks to the secondary role of exotic slave, Moorish page or mulatto servant. Stooges, almost always anonymous.

Despite racism and vexations, some blacks nevertheless managed to force their way into high society in the 18th and 19th centuries. Witness the image of happiness – no doubt a bit forced – captured in this portrait of a couple representing Gustav Sabac el Cher, an Afro-descendant musician in the Prussian army who became a nurseryman, with his (white) wife Gertrud Perlig.

Presented by Egypt to Prince Albrecht of Prussia, his father, August, had led a military career before becoming a Prussian citizen in 1882. ‘it leads mainly on the Internet.

Before launching this Instagram account, the young painter had begun to replay the genre of the large portrait, representing black women, friends and close relatives for the most part, in period costumes. Cinched in the corsets of the Ancien Régime, these women of today wear smartphones or iPods, emblems of our century. Her project, initially feminist in colour, now extends to the representation of black men.

In 2021, the English Heritage association commissioned a portrait of James Chappell from him. This servant, employed at Kirby Hall, in Northamptonshire, saved his employer, Christopher Hatton, from an explosion. To camp the role of James Chappell, she takes as a model a youtubeur with an afro cut. “There was no image of him as he was not unworthy. It was up to me to give it a face so that it would not be forgotten,” says Glory Samjolly, happy that this painting is now hung in the very places where Chappell officiated.

The artist recognizes it, she has not seen the exceptional exhibition “Black Model” which, in 2019, explored at the Musée d’Orsay the representations of blacks in French art in the 19th century. It is nevertheless part of the movement to revalorize the black figure, led for a long time by the Nigerian artist Yinka Shonibare or the African-American Kehinde Wiley, concerned with the issues of power and their transposition to the canons of art. .

Glory Samjolly also admires the British photographer of Ghanaian origin Heather Agyepong who, in her sepia-toned photos, brings to life the little-known figure of Sarah Forbes Bonetta. This Yoruba princess “given” as a diplomatic gift to Queen Victoria of England, and whose intelligence British society praised, died at the age of 37 from tuberculosis.

But don’t draw parallels with The Bridgerton Chronicle, Netflix’s adaptation of a novel for young adults, telling the “color blind” love stories of an imaginary multiracial British court. “Issues of race and class are secondary there, whereas they are central to me,” replies Glory Samjolly. These questions, she hopes to extend them one day in a physical place, by exhibiting the reproductions of the paintings and engravings listed on her Instagram account.