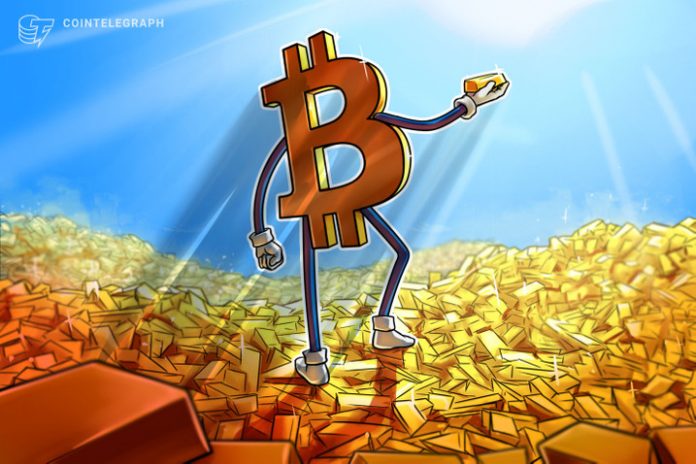 The statement was made as a takeaway at Blockworks’ “Bretton Woods” conference, which brought together macro analysts, economists and investors to discuss Bitcoin.

Bitcoin (BTC) is replacing gold even as United States’ regulators attempt to disrupt its advance, said Mike McGlone of Bloomberg Intelligence on Monday.

Senior commodity market strategist noted that Bitcoin’s growth was due to the “digitization” of money and finance. He also pointed out that these same factors had helped the U.S. dollar rise organically and quickly over gold.

McGlone’s remarks were presented as key takeaways at a recent conference held at New Hampshire’s Bretton Woods Hotel. This conference was attended by macro analysts, economists and investors including Amy Oldenburg from Morgan Stanley and Jurrien Timmer of Fidelity Investment.

Bretton Woods is popular among economists for hosting the United Nations Monetary and Financial Conference in 1944, which later led to the obligation that the United States, Canada, Western European countries, Australia and Japan would tie their currencies to gold.

On August 15, 1971, the United States President Richard Nixon removed the dollar from the gold standard. Many economists hailed the move, calling upon John Maynard Keynes’ benchmark opinion that the gold standard was “a barbarous relic.”

The “Bretton Woods: The Realignment”, the latest conference, served as a metaphorical tribute to the end the Bretton Woods system. It also focused on emerging financial assets such Bitcoin which threaten to replace the “dollar Hegemony” and become the next global reserve currency.

Bitcoin’s challenge to gold’s traditional position as a competitor to the greenback has been directly addressed by this move. McGlone said that it is already happening.

Five decades of dominance by the dollar

Harold James, Princeton University’s economic historian, argued that digital technologies are driving a new monetary Revolution that could end the greenback’s global primacy altogether in his July 2021 article. He also suggested that crypto assets like Bitcoin and Ether could play a role in reshaping global economies.

These statements were made despite the fact that the dollar has been able to withstand the worst economic conditions over the past five decades, and remain the world’s reserve currency.

In detail, the so-called Nixon Shock in 1971 led to double-digital inflation in the U.S., prompting the dollar to fall by more than 50% against the Japanese yen and the German Deutsch mark. However, neither currency can replace the greenback in the global race for fiat hegemony.

In the first half 1980s, the dollar experienced strong recovery rallies. Similar upside moves were seen in the second half 1990s, during the dotcom boom and bust. The 2008 financial crisis, COVID-19-led economic turmoil and subsequent greenback collapse did not affect the greenback.

Are you prepared for a dollar shock?

Second, liberalized capital market, driven by booms in eurodollar and the petrodollar markets led to a boost in dollar’s international utility. This encouraged foreign central banks to use the dollar to execute international trades.

And third, the U.S. government’s power to impose financial sanctions on countries it deemed unruly to the White House’s policies — especially in the wake of the World Trade Center attacks on Sept. 11, 2001 — made the dollar a financial weapon.

James pointed out that the dollar had experienced unprecedented economic conditions since the COVID-19 crises. In the past 18 months, the U.S. The deficit has risen to 13.4% of gross domestic product over the past 18 months, which is the second-largest increase since the end of World War 2.

After the Senate’s passing of the $1 trillion infrastructure bill, it expects to rise. The Congressional Budget Office reported that the stimulus would expand the budget deficit by another $256 billion within the next decade.

Meanwhile, another package worth $3.5 trillion, which focuses on anti-poverty and climate, is expected to have been enacted by the end of this year. James observed that the dollar’s upside prospects on global markets had been lowered by rising deficits. He wrote:

“Some dangers are already evident in the Treasury market where there have been liquidity strains in 2020 and a weakening foreign demand […]. This could be ending the long period dollar hegemony.”

Bitcoin vs. gold: An alternative to the dollar

Insomuch as the Bitcoin market has seen supersonic price rises, the Federal Reserve’s loose monetary policy has led to gold being beaten by the strong upside movements.

Pomp Investments partner Anthony Pompliano, a long-time advocate of Bitcoin, said in a note to clients that if one holds their wealth in dollars, bonds or gold, their investments will yield “negative real rates of return.”

You are basically left with bitcoin or equity, which is why you should consider an allocation to Bitcoin given the high volatility that will likely outperform equities for a long enough period.

McGlone noted in Monday’s tweet that Pompliano’s statements were made despite regulatory hurdles for emerging digital assets. The crypto industry has faced a wave of attacks from Treasury Secretary Janet Yellen, Senator Elizabeth Warren and Gary Gensler, chairman of the Securities and Exchange Commission.

McGlone pointed out that hard regulations will not be able to stop Bitcoin’s rise against gold. Liam Bussell from Banxa’s corporate communications, stated that the U.S. regulators don’t want to stop Bitcoin, but they want to protect U.S. investor against fraud.

“The US regulators (CFTC, SEC, and FINRA) that could touch digital assets (CFTC and FINRA), are open to diversification of instruments as long as they are fair and operate in a transparent way.”