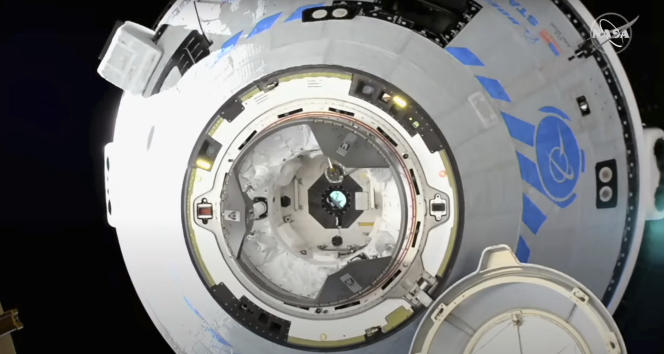 The Boeing capsule, Starliner, docked with the International Space Station (ISS) for the first time on the night of Friday May 20 to Saturday May 21. It’s a success for the company which must in the future transport astronauts for NASA, even if this empty test flight took place years behind those of SpaceX, the company founded by Elon Musk.

The docking took place on Saturday at 2:28 a.m. French time, more than an hour behind the schedule initially planned due to final checks during the approach maneuvers, meticulously choreographed 400 km above our heads.

Astronauts aboard the ISS, and the control room in Houston, Texas, closely monitored the entire operation. Starliner first leveled off about 250 yards from the station. Then, after advancing slightly towards the ISS, the capsule backed up to ensure it could retreat if needed. Finally, after a new controlled stop, although longer than expected, at 10 meters, the delicate final maneuver, carried out while the ISS is speeding by at 28,000 km/h, has been initiated. The vehicle approached slowly, until contact.

“The Starliner spacecraft successfully completes its historic first docking with the International Space Station, opening a new route to the flying lab for crews,” a commentator said during NASA’s livestream.

The capsule hatch will not be opened until later in the day on Saturday. Boeing is carrying approximately 230 kg of supplies, including food. Starliner must remain docked to the ISS for about five days, before descending back to Earth to land in the desert of the US state of New Mexico, at the White Sands base.

A first unmanned test flight had already been attempted in 2019, but the capsule had then encountered several problems and it had to turn back without being able to reach the station. Since then, Boeing has been struggling to catch up with SpaceX, yet a new player in the aerospace sector in comparison, but which has already been transporting astronauts for NASA since 2020, after the successful qualification flights of its own capsule, Dragon.

Starliner took off Thursday from Florida, atop a United Launch Alliance (ULA) Atlas V rocket. About thirty minutes after launch, the capsule had managed to place itself on the correct course, but two of its twelve thrusters had failed. NASA and Boeing officials, however, downplayed the incident, which they said should not affect the mission.

The thrusters will be used again at the end of the mission, for the maneuver intended to bring the capsule back into the Earth’s atmosphere. But the problem does not a priori “need to be solved” by then, the previous pushes having worked despite everything, said Steve Stich of NASA during a press conference on Thursday evening. The system “does not pose a risk for the remainder of the test flight,” NASA confirmed on its blog Friday.

News Editor - May 21, 2022 0
Pascal Dupraz is a Ligue 1 character. Almost an archetype. That of the firefighter on duty, this coach who braves the fire to save...