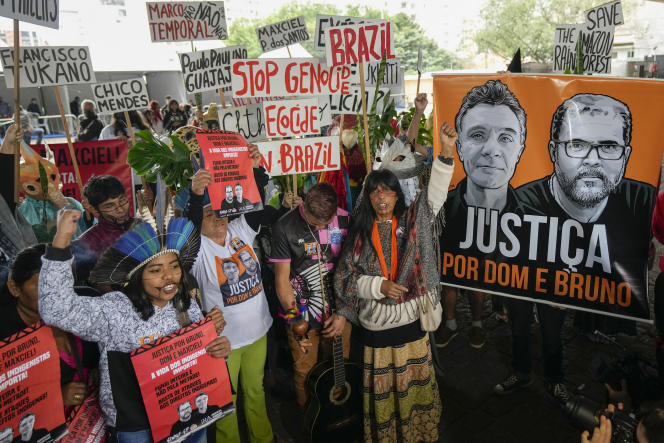 Brazilian police confirmed Saturday (June 18th) that Brazilian expert on indigenous populations Bruno Pereira and British journalist Dom Phillips, whose remains were found in a remote area of ​​the Amazon, were killed by “firearm “.

Pereira’s remains “are among those” found by investigators, the Brazilian Federal Police (PF) also said in a statement. On Friday, she had already claimed that the first human remains discovered on Wednesday on the indication of a suspect were those of Dom Phillips. Mr. Pereira was hit by three shots, including one in the head, and Mr. Phillips by a bullet in the chest, the federal police further specified.

They were last seen on June 5, when they took a boat to Atalaia do Norte (north-west), in the Javari Valley, an area known to be dangerous where multiple drug trafficking, fishing or illegal gold mining.

Mr. Phillips, 57, a long-time contributor to The Guardian newspaper, and Mr. Pereira, 41, a recognized expert on indigenous peoples, were in the Amazon as part of the writing of a book on the preservation of the environment.

A third suspect in these murders went Saturday morning to the police station of Atalaia do Norte, in the state of Amazonas (west), also announced the PF. The man is known to be “an outlaw,” she added. According to all the evidence and testimonies collected, the latter “was at the scene of the crime and actively participated in the double homicide”, police commissioner Alex Perez Timóteo told the G1 news site.

The double murder has sparked outrage around the world, with strong criticism of far-right President Jair Bolsonaro, who has been accused of promoting deforestation and encouraging the exploitation of resources in the Amazon since he came to power in 2019.