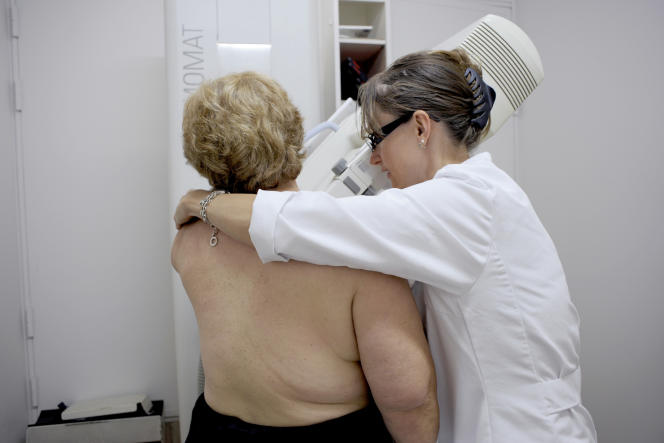 What’s New in Cancer? The annual high mass of oncologists, the American Society of Clinical Oncology (ASCO) meeting, was held in Chicago from June 3 to 7. After two years of exclusively virtual sessions due to the pandemic, she was experimenting with a hybrid format, face-to-face and videoconference.

“Thanks to this formula, we could follow the sessions from France, but the interest of being on site lies in our meetings with our colleagues, explains, from Chicago, Professor Christophe Le Tourneau, oncologist and head of the development and drug innovation at the Institut Curie. These two years without being able to exchange have weighed on us. It is by talking about our patients with colleagues that ideas come to us. In fact, there were crowds on Sunday, June 5, at the convention center – the largest in the United States – for an event which usually welcomes nearly 40,000 oncologists from around the world.

Will the 2022 edition of ASCO remain marked with a white stone? Opinions differ. “There has not been a major therapeutic revolution announced, but a multitude of advances which are digging into the paths traced by existing therapeutic strategies”, estimates Christophe Le Tourneau.

For others, the idea of ​​a 2022 edition deprived of significant innovation deserves to be nuanced. “We are probably less impressed than before,” said Professor Jean-Yves Blay, director general of the Léon-Bérard Center in Lyon and president of Unicancer, which federates cancer centers. An advance presented on Sunday, for example, is likely to radically transform the management of 65% to 70% of metastatic breast cancers. And probably also, in the future, a small part of other cancers – lung, colon, ovary…”

This advance concerns a class of drugs that appeared about ten years ago, conjugated antibodies. Explanations. “Conjugated antibodies are version 2.0 of chemotherapy. It’s a new way to deliver it,” explains Christophe Le Tourneau. They are made up of an antibody coupled with chemotherapy, that is to say a drug that is toxic to cells. The antibody will bind to a molecular target present on the surface of the tumor cells, then it will be internalized and will deliver the drug inside these cells. Hence, in theory, greater efficacy and less toxicity of this treatment for healthy cells.

The first conjugated antibody, T-DM1 (Kadcyla, Roche laboratory), couples an antibody, trastuzumab, to emtansine (DM1), a cell division inhibitor. This antibody (also called Herceptin) targets the HER2 protein, a receptor overexpressed in 12% to 20% of metastatic breast cancers (and in 20% to 30% of primary breast cancers). Used alone, Herceptin was at the origin of a first therapeutic revolution, in the early 2000s: targeted therapies, drugs designed to interfere with the molecular abnormalities associated with cancer cells.

Back to the very first conjugated antibody: since 2013, T-DM1 has been indicated for patients with HER2 positive, metastatic or unresectable breast cancer who have previously received trastuzumab and/or a taxane. It improves tumor progression-free survival by 3.2 months (median) and overall survival by 5.8 months (median) compared to the standard treatment.

Another conjugate antibody has recently appeared: it is the trastuzumab-deruxtecan combination (Enhertu, Daiichi Sankyo laboratories and AstraZeneca). It is aimed at the same category of patients as T-DM1. Since October 2020, it has been available under a temporary authorization for use (ATU) in France, but does not have a marketing authorization (AMM).

But now at ASCO the results of a clinical trial likely to broaden the target of this drug were presented on Sunday, June 5. This expanded target is paradoxically patients with metastatic or inoperable breast cancer, where the HER2 receptor is present not in excess, but in small quantities on the surface of tumor cells. “In half of patients with metastatic breast cancer, the tumor has low but detectable levels of HER2,” explains Jean-Yves Blay. For these patients, the standard treatment is chemotherapy.

In the Destiny-Breast 04 trial (a phase 3 trial), 557 patients with metastatic breast cancer showing low levels of HER2 were recruited. They were drawn: two-thirds of them received Enhertu; a third received standard chemotherapy. Results: After a twenty-eight month follow-up, Enhertu reduced the risk of cancer progression by half compared to chemotherapy and the risk of death by 36%. Median tumor progression-free survival increased from 5.1 months on chemotherapy to 9.9 months on Enhertu. And the median overall survival from 16.8 months to 23.4 months. “A gain of 6.6 months, with a drug initially not intended for these patients, is enormous”, estimates Jean-Yves Blay. In France, several thousand patients could be affected. According to the professor, this conjugated antibody could, in the future, be interesting in other tumors (ovary, lung, colon, etc.) with low levels of HER2.

While welcoming these “interesting signs of activity”, Etienne Brain, oncologist at the Institut Curie, urges caution. “In the era of personalized medicine, it may seem paradoxical to extend the indications of a highly targeted treatment to populations that were not the initial target,” he notes. The market for targeted treatments, in fact, is very competitive. “The search for new populations eligible for these treatments, which can double the number of patients concerned, is obviously very interesting for laboratories. »

Caution, therefore, especially since Enhertu has been associated with a form of acute fibrosis of the lung (acute interstitial pneumonia), the detection and management of which require rigorous monitoring. In the trial, this adverse effect was associated with three deaths. Another unknown: how long will the observed benefits last, beyond the twenty-eight month follow-up of the trial?

In addition, the importance of supportive care has been reinforced at ASCO. Adapted physical activity, for example, has already shown its benefits in patients with breast cancer: it improves quality of life and limits recurrences. But what about very fast growing cancers? A study was conducted by the Institut Curie with 313 patients (median age: 64 years) with advanced pancreatic cancer. They were divided by lottery into two groups: the first received standard chemotherapy with lifestyle advice; the second benefited, in addition, from sixteen weeks of support by a professional remotely supervising a personalized program of adapted physical activity (endurance exercises and muscle strengthening) at home, the patient designating one of his relatives for the ‘encourage.

Then the patient self-assessed his quality of life using validated scales: overall health, physical, emotional and social functioning, pain, appetite, sleep, transit, financial difficulties. Result: “This program has reduced the risk of deterioration in quality of life by 20% to 30%, at any time, and for each of the parameters”, summarizes Cindy Neuzillet, specialist in digestive cancers at the Institut Curie, who co-coordinated this study, conducted in 16 French centres. “A risk-free procedure,” she says, no patient having had complications related to this activity.