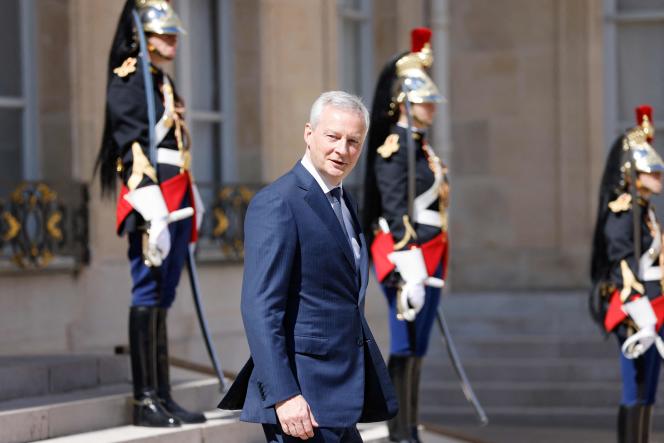 Bruno Le Maire had announced it in a press release more than ten days before the resignation of the government of Jean Castex: “I have always told voters that I will not serve more than three terms: I keep my word. ” The Minister of Economy, Finance and Recovery thus renounced a new candidacy for the legislative elections in the Eure, but in no way to his political ambition: Friday, May 20, the former member of the Union for a movement Populaire (UMP) was appointed by the Prime Minister, Elisabeth Borne, and the President of the Republic, Emmanuel Macron, to head the Ministry of the Economy, Finance, Industrial and Digital Sovereignty.

Tuesday, May 17, this weighty minister of Mr. Macron since 2017 said he was “serene” about the composition of the new government, during a company visit to Tourcoing (North). “Knowing Elisabeth Borne well, I am happy for my country that the President of the Republic has chosen her as Prime Minister (…). She is a woman who has demonstrated her ability to carry out difficult reforms, who has demonstrated her courage,” he added.

A writer in Bercy

After five full years spent at Bercy, a longevity of which the person concerned has often prided himself, Mr. Le Maire has obtained the renewed confidence of Mr. Macron, despite the distance that the President of the Republic has long maintained with this defector. from the right. Enarque, graduate of letters, he was a French teacher in a “sensitive area” in Bron, in the suburbs of Lyon. He is particularly noted for having written twelve novels on the corridors of power and political essays (including four during the quinquennium). It even inspires a character in Anéantir, the latest book by Michel Houellebecq.

A collaborator of Hubert Védrine upon leaving the ENA in 1998, as Secretary of Foreign Affairs, Bruno Le Maire has devoted most of his career to politics. He was notably in Dominique de Villepin’s cabinet as a “strategic and defense affairs” adviser in 2003 when France refused to go to war in Iraq, alongside the United States. He follows Dominique de Villepin during all his appointments, from 2002 to 2007, from the Quai d’Orsay to Matignon as director of the cabinet, before launching for the first time universal suffrage.

A right-wing man rooted in Normandy

Originally from Neuilly-sur-Seine (Hauts-de-Seine), it is in the 1st district of the Eure that he is invested by the UMP. Elected, he sat until 2009, the year in which he joined the government of François Fillon as Secretary of State for European Affairs. In 2010, he presented himself as the head of the regional list in Haute-Normandie under the banner of the UMP and lost in the second round against the list of the Socialist Party led by Alain Le Vern.

In June 2009, he was appointed Minister of Food, Agriculture and Fisheries until the end of Nicolas Sarkozy’s mandate in 2012. At the same time, he became a member of the UMP until becoming general delegate in charge of the project from 2011 to 2013. He tried in 2012 to take the lead of the party but failed to gather the necessary sponsorship. He ran for the right and center primary in November 2016 and only won 2.38% of the vote. He then called to vote for François Fillon against Alain Juppé, before abandoning him when he got into legal trouble in March 2017. He joined Emmanuel Macron a few months later. A choice he has not had to regret so far.

News Editor - May 21, 2022 0
Appointed Minister of Labour, Full Employment and Integration, Olivier Dussopt only appears ninth in the government hierarchy. But he will implement one of the...