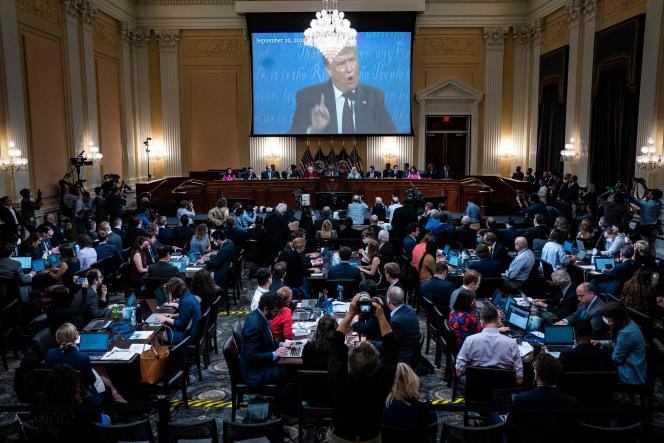 The devastating dismantling has begun. On Monday, June 13, the commission of inquiry into the January 6, 2021 assault on the Capitol offered a mind-boggling look behind the scenes of the White House during the three months leading up to this fatal day for American democracy. From Donald Trump’s defeat to Joe Biden in the November 3, 2020 presidential election to the attack initiated by the outgoing president’s supporters, a campaign of lies about imaginary fraud has been launched. And this while the entourage closest to Donald Trump, including members of his family, questioned the strategy pursued.

This second day of public hearings by the committee, made up of nine elected members of the House of Representatives, confirmed that the inaugural session, on June 9, had only been an appetizer. Led by two Democrats, President Bennie Thompson (Mississippi) and especially Zoe Lofgren (California), this session was built around very effective video sequences giving the floor to Donald Trump’s political and legal advisers, and several witnesses present before the commission.

The relentless unfolding followed a chronological framework, from the first preventive denunciations of fraud by Donald Trump, several months before the election. But the real starting point is the evening of November 3, 2020, at the White House. An evening quickly transformed into a crisis meeting, due to the announcement by the Fox News channel of Joe Biden’s victory in Arizona, a decisive state, traditionally Republican. This caused “anger and disappointment”, according to Jason Miller, adviser to the president.

Bill Stepien, Donald Trump’s campaign manager, was unable to appear before the commission on Monday because his wife was giving birth at the same time. However, excerpts from his testimony, collected in February, were instructive. Bill Stepien described a presidential entourage divided into two teams, belonging to him on the “normal team”, which did not want to rush while waiting for the end of the count. “[Trump] thought I was wrong. He told me,” recalls Bill Stepien. “The results were still counting,” Ivanka Trump said uncomfortably in her testimony. Her husband, Jared Kushner, the president’s special adviser, remembers slipping to the president, “That’s not the approach I would take if I were you. But Trump replied, “I trust Rudy.” »

Former New York City mayor, attorney Rudy Giuliani was the driving force – “drunk” that night, according to Jason Miller – encouraging the president to follow his instincts, claim victory and launch the crusade. against fraud. Mr. Giuliani felt, according to Jason Miller, that anyone challenging this approach was “weak”. With his colleague Sidney Powell, the president’s lawyer takes the lead in the campaign, in front of the cameras and behind the scenes.

There were many in the White House who judged harshly the arguments used, the fanciful schemes involving Cuba, Venezuela and the Democrats. “I didn’t think what was going on was necessarily honest or professional at this time in history,” Bill Stepien points out. “I thought what they were proposing was crazy,” recalls legal counsel Eric Herschmann, who had assisted Donald Trump during the first impeachment proceedings against him.

A total of 62 legal complaints were filed. Before the commission, Benjamin Ginsberg, renowned expert in electoral laws among Republicans, made a severe assessment of these steps. “In neither case has a court established that the charges of fraud were founded. “Two days before the November 3, 2020 election, he had signed a very critical column against Donald Trump in the Washington Post. “Evidence of systematic fraud has become the Republican Party’s Loch Ness monster,” he wrote, adding, “My party is wrecking itself on Trump’s altar. »

The failure of legal proceedings in November 2020 did nothing to stop the attempt to intoxicate conservative public opinion. On the contrary. The commission insists on the pecuniary interest of the lies promoted by the Trump team, which sent up to 25 emails a day to its sympathizers. A total of $250 million has been raised, including $100 million in the first week after the presidential election, supposedly to fund fraud complaints and investigations. “There was not only a big lie, but a big scam,” summed up Zoe Lofgren. “The allegations of voter fraud were false,” she added. Mr. Trump’s closest advisers knew this. Mr. Trump knew it. »

On the basis of testimonies internal to the campaign team, the commission established that an official Fund for the defense of the elections had been set up, without real existence. A political action committee (PAC) called Save America has donated millions of dollars to conservative organizations close to Trump or to Event Strategies, which will organize the January 6, 2021 meeting. possible lawsuits for financial crimes: what happened to the rest of the money collected, if not to fight against invented frauds? The commission did not reveal the extent of the documents or testimony it had. At the end of its work, it could communicate them to the Ministry of Justice.

Video clips from the hearing of William Barr, the former attorney general, marked the day on Monday. He recounted in detail the denial in which Donald Trump had locked himself. Calling the allegations of fraud “bullshit”, “nonsense” and “crazy stuff”, William Barr notably spoke about his meetings with the president. “How long is he going to go on with this stolen election stuff?” “, he asks on November 23 to Jared Kushner and Mark Meadows, the chief of staff, in a corridor of the White House. “It’s getting more realistic,” Mark Meadows reportedly replied. “We’re working on it,” reportedly added Jared Kushner.

On the contrary, accusations of fraud multiply until mid-December 2020, while the president puts pressure on the Ministry of Justice to seize and report them. These allegations concern both Dominion Voting System electronic voting devices and alleged suspicious deliveries of ballot papers, by suitcase or truck. Before the commission, several former officials, magistrates or poll supervisors, testified to the futility of these accusations, in Georgia or Philadelphia. After an interview at the White House on December 14, 2020, where Donald Trump had redoubled his vigor on this subject, William Barr felt “demoralized”, he confided to the commission, saying to himself: “He is detached from reality if he really believes this stuff. »

The former attorney general’s outspokenness contrasts with his attitude in office, which has never seen him stand out from the Trump administration in previous years and has drawn constant criticism from the Democratic camp. In his resignation letter, December 14, 2020, with syrupy formulations, he still said his “pride” to have participated in “the many unprecedented successes and achievements” of Donald Trump. In particular, he paid tribute to him for having “advanced the rule of law”.

On Monday, the former US president denounced in a 12-page statement the work of the commission of inquiry, a “comedy” which “is a brazen attempt to distract the public from the truth”. The truth ? Again and again the allegations of fraud: “Americans overwhelmingly came to Washington on January 6, 2021 to hold their elected officials accountable for clear signs of criminal activity in the election. “Reality” clearly still hasn’t caught up with Donald Trump.