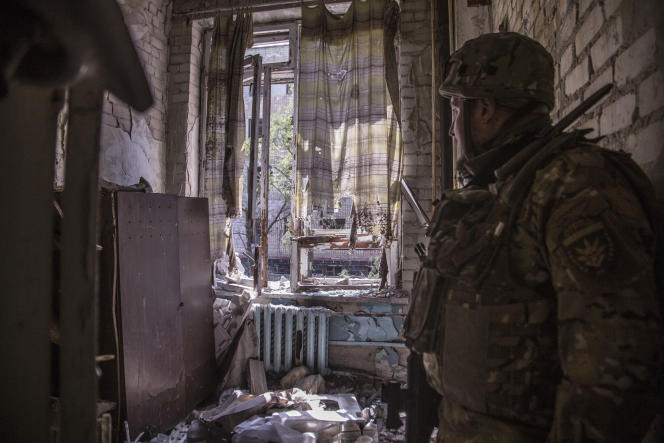 Ukrainian authorities admit a serious shortage of ammunition and guns, as the pace of Russian conquest increases in the Donbass. Moscow said on Sunday it had “destroyed a large warehouse” of Western-supplied weapons near Chortkiv in western Ukraine, injuring 22 people. Fighting escalates in the east. “The situation in Sievierodonetsk is extremely difficult,” acknowledged the Ukrainian governor of the Luhansk region, Sergiï Gaïdaï. Militarily, Russia “uses large-scale artillery and, unfortunately, has a 10-to-1 advantage,” said Ukrainian army commander-in-chief Valery Zaluzhny.

After placing the seal of secrecy on the Ukrainian losses to preserve his public opinion, the Ukrainian head of state unveiled on June 1 a death toll of 10,000 since the start of the Russian invasion on February 24. Most importantly, he admitted that the war daily kills 60-100 Ukrainian soldiers and injures another 500. On June 9, the adviser to the chief of staff of President Mykhaïlo Podoliak drove the point home, evoking a rate of losses twice as heavy, a range between 100 to 200 soldiers killed per day.

These official admissions of the critical nature of the situation are accompanied by pressing demands for an acceleration of Western military aid. According to Mr. Podoliak, the carnage is explained by “the asymmetry between Ukrainian and Russian military capabilities”. His colleague Oleksiy Arestovych, also an adviser to the Ukrainian presidential administration, said on Sunday that “the West saves us financially, politically and militarily. If the Westerners hadn’t helped us or weren’t helping us now, I guess we would be defending Lviv [a city in the very west of the country].”

The arsenal that Russia has deployed on Ukrainian territory currently includes 1,110 tanks, 2,800 armored personnel carriers and infantry fighting vehicles, 1,130 artillery systems of calibers over 100 mm and above and 78 launchers ballistic missiles, Ukrainian deputy intelligence chief Vadim Skibitsky told Russian-language channel Currenttime.tv on Friday. In the air, there are 400 planes and 360 combat helicopters, according to the same source. For Mr. Skibitsky, “international aid is still not enough to slow the offensive pace of Russian forces”.

In the current war of attrition, stocks and production capacity take on a crucial character and could determine the outcome of the conflict. This is why the Ukrainian authorities admit that the next few weeks will be difficult. “Ukraine is highlighting its needs to accelerate external assistance. Russia plays on the same board, argues that Ukrainian reserves are emptying, to convince that the end of the war is coming soon, “said Pierre Grasser, Russian defense specialist and associate researcher at the Sirice laboratory. Russia and Ukraine “are in fact out of breath”, according to the researcher, who points to a deficit of ammunition on the Ukrainian side.

On June 10, Vadim Skibitsky explained to the Guardian that his country’s forces fire 5,000 to 6,000 artillery shells every day. “This is causing serious strains on the reserves,” notes Pierre Grasser. In addition, “several depot explosions over the past decade have weakened its ability to supply parts inherited from the USSR. For these guns, kyiv can count on deliveries of Croatian and Bulgarian-made ammunition, as well as a number of donations, which are Slovak, Polish, Czech and soon Greek”.

At the current rate of Ukrainian artillery, “European stockpiles of ex-Soviet ammunition would last three more months. This would also imply that all of these countries agree to part with all their stocks, which is not certain, ”continues the French researcher. There remains for kyiv the option of westernizing the Ukrainian arsenal. Ammunition stocks are a little better: Ukraine can count on the 144,000 shells promised by Washington in April.

“Without being definitive, as we only have snippets of information, it seems that the Ukrainians are now in a transition phase where they are gradually abandoning their Soviet weapons, in particular artillery, in favor of Western weapons. more advanced and efficient,” explains Jean-Christophe Noël, Associate Researcher at IFRI’s Center for Security Studies. For this expert, “these weapons are arriving at an insufficient rate compared to the needs generated by the current violent Russian offensive”.

The Ukrainian army is trying to remedy its shortcomings with tactical tricks. For example, by forcing his opponent to fight where he is obviously the least effective: in an urban environment. “Besides their desire to cede as little ground as possible, this may also be why the Ukrainians are holding Sievierodonetsk: relying on the equalizing power of fighting in the city,” Mr. Noël speculated. The Ukrainian forces logically avoid facing an enemy in open country with a very superior firepower. “The Ukrainians create a fixation point to buy time, until the balance of power is no longer balanced,” concludes the researcher.