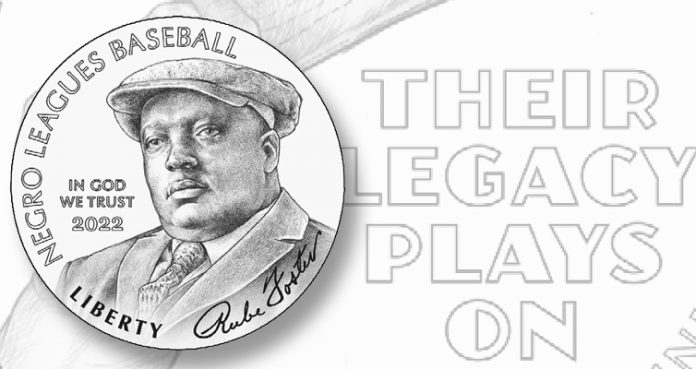 Although the proposed designs were submitted in complement pairs, it was sometimes recommended that a reverse be used for the obverse or for a denomination not intended.

The recommended obverse of the gold $5 coin depicts an image with a facsimile signature by Andrew “Rube”, a former American baseball player, manager and executive in the Negro leagues. Foster was inducted into the National Baseball Hall of Fame on January 1, 1981.

Reverse design: A tip of the Hat, which is a symbol of respect for those who have played for the pure love of the game and persevered with pride and passion.

The silver dollar obverse depicts a player in action as he throws a pitch. It also includes the inscription THE SOUL of BASEBALL.

The silver dollar reverse is recommended, submitted as an obverse. It was inspired by classic team photos featuring a diverse group nine players and the inscription “WE ARE THE SHIP ALL ELSE”

As a reverse for silver dollars, the obverse was submitted for the copper-nickel clad dollar. This design depicts a pitcher at mid-throw, with a baseball in the background and baseball stitching as a border.

The Negro Leagues logos are shown in the recommended reverse. This is a different design. It features the logos for every Negro Leagues team. A cap monogram, representing the legacy and solidarity of the organization, is used.