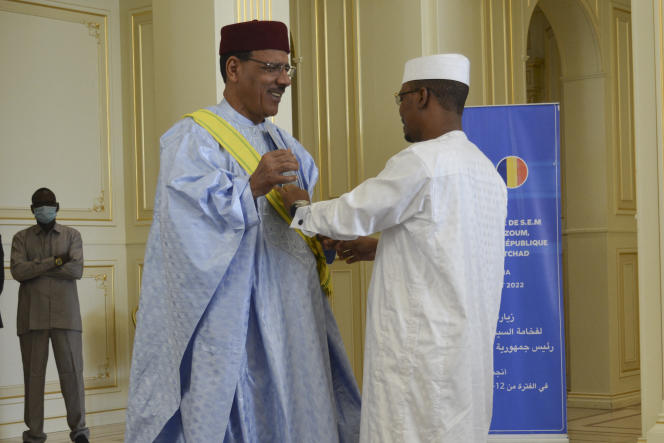 The presidents of Chad and Niger promised, Wednesday, July 13 in N’Djamena, to do everything to revitalize the joint anti-jihadist force of the G5 Sahel after the departure from Mali and signed a security cooperation agreement of which nothing has filtered. “The decision to withdraw from Mali is an episode that will be overtaken, there will soon be a meeting” between the four other allied countries in the G5 Sahel (Chad, Niger, Burkina Faso and Mauritania) “to ensure that the G5 be viable,” Nigerian President Mohamed Bazoum told a press conference.

Bamako announced on May 16 that it was leaving this alliance whose armies are fighting, alongside the French “Barkhane” force, the many jihadist groups that are bloodying the Sahel and are spreading inexorably towards the south of the region. “We have not yet considered that it is over for the G5 Sahel, we will fight,” hammered Mr. Bazoum, without commenting on Bamako’s decision. The Chadian Mahamat Idriss Déby, proclaimed “transitional president” at the head of a junta of fifteen generals on the death of his father, Idriss Déby Itno, fifteen months ago, “regretted” him, the departure from Mali . “Let’s stay optimistic and hope he reverses his decision,” the young general said.

The staff of “Barkhane” maintained in N’Djamena

France, which has deployed thousands of soldiers in Mali for several years (up to 5,100), has been pushed out by the junta in power since August 2020. In Niger, its new privileged partner, it will maintain more than 1,000 men, three fighter planes, six armed drones and four to six helicopters, Paris recently indicated, which does not say more but regularly assures that its troops will no longer operate as a substitute for local armies but in “support according to the needs of the countries concerned. Asked by AFP about the French system desired by his country, Mr. Bazoum evaded the question. “We are talking with our partners to redefine redeployment,” he said simply.

The two heads of state, who announced without further details that they had signed a new “agreement in the field of security”, did not say a word about the redeployment of their own troops in the Sahel, made necessary by the reduction of the French sail. The French headquarters of the operation that will succeed “Barkhane” will be maintained in N’Djamena for the time being, but its staff will be reduced, according to Paris. The powerful Chadian army, which regularly deploys to its neighbors, is the main local pillar of the war against the jihadists.