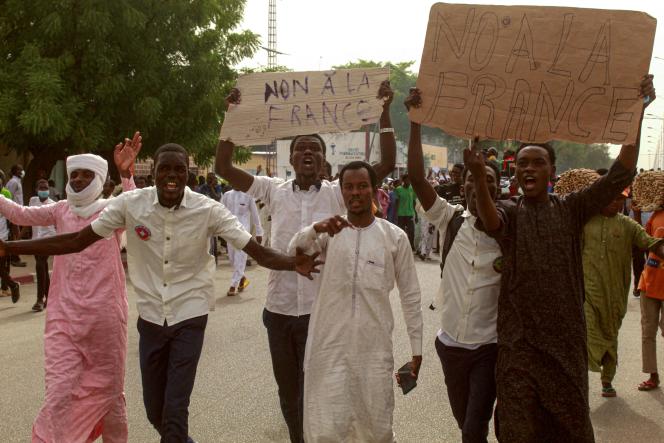 Chad’s main rebel groups demanded from the ruling junta on Saturday (21 May) the “immediate and unconditional release” of opposition members imprisoned after a violent demonstration against France on 14 May. This request comes as these groups have been laboriously discussing since March 13 in Doha (Qatar) with the Chadian authorities for peace negotiations supposed to lead to a new Constitution and “free and democratic” elections.

On May 14, a protest march organized in N’Djamena against France, accused of supporting the military junta in Chad, and authorized by the authorities, was marred by incidents. Seven gas stations of the French oil group Total had been vandalized and twelve police officers injured, according to the police.

Two days later, five leaders of Wakit Tamma, the main opposition coalition, were charged with “gathering causing public disorder, bodily harm, arson and destruction of property and imprisoned in the Klessoum remand center. Wakit Tamma’s coordinator, Max Loalngar, was charged on Thursday, again for the same reasons. The trial of the five defendants is due to begin on June 6.

“Excessive use of force”

“We demand the immediate and unconditional release of those arbitrarily detained for their participation in the protests,” the rebel groups said in their statement, condemning the “excessive use of force” and calling on their supporters to “show restraint” and to “avoid any uncivil acts”. The government orders that prompted these arrests “do not promote a serene climate for the continuation of peace negotiations”, they stressed.

On the death of former President Idriss Déby, killed at the front against rebels more than a year ago, his son, General Mahamat Idriss Déby Itno, took over the reins of the country at the head of a group of fifteen generals. Immediately dubbed by the international community, Paris in the lead, Mahamat Idriss Déby then dissolved Parliament, while promising “free and democratic elections” within eighteen months, at the end of a national dialogue between the junta, armed groups and the opposition.

Since then, this forum, which must bring together all the political and armed opposition, according to the Head of State, has not been able to start, the armed groups not managing to reach an agreement with the junta within the framework of the “pre-dialogue from Doha.