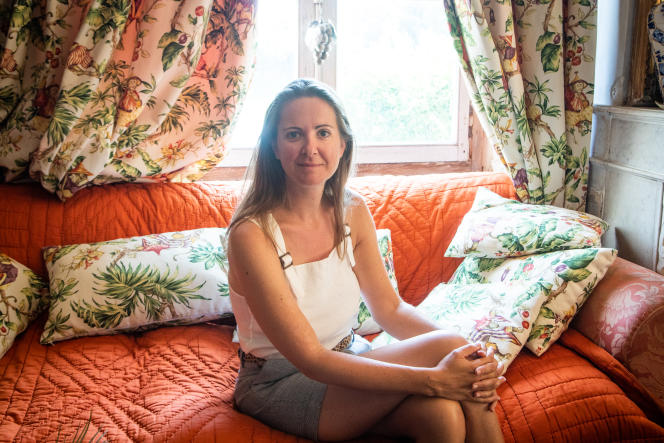 On Sunday July 17, the Couthures-sur-Garonne International Journalism Festival, organized by the Le Monde group, closed its doors after three days of debates, conferences, documentaries, outdoor screenings… In the heart of this village of 370 inhabitants, some 6,000 festival-goers, curious to understand the underside of journalism, came to spend one, two or even three days there. New for this 7th edition, free access to the festival, from 6 p.m., for evening screenings and debates, which attracted nearly 700 additional people. Review with the Belgian journalist, producer and host, Charline Vanhoenacker, godmother of the 2022 edition.

I knew about the reputation festival, and when I got the offer I said, “Nice, this festival is cool!” “I knew it was a very nice proposition. And then, I couldn’t leave Benoît Poelvoorde [festival sponsor in 2018] the monopoly of the Belgian sponsor! I am trained as a journalist and I worked for years as a correspondent in Paris for Belgian and Swiss newspapers, so a journalism festival that I have been asked to sponsor necessarily affects me because information remains at the heart of my job.

There is also, perhaps, a post-pandemic effect where this kind of proposal cannot be refused, because meeting people today is so precious.

First, I am amazed by the size of the event. I was told that the village was very small… It’s true, but I also saw a large number of guests, festival-goers, two hundred meetings and round tables. In fact, I’m not surprised that we were two Belgians to sponsor the event because it really has this good-natured side that we love!

I was very touched to see the little and the big editorial. It’s quite unusual to see children stop adults in the street and ask them questions before returning to their editorial office to put together their subject. As godmother, I am in the position where I meet the festival-goer, the volunteer, people who come to talk to me about everything and nothing. But I also discover speakers like Fiona Schmidt (feminist journalist on Instagram) that I didn’t know, and I listen to them debate. Sitting with your ass in the grass or on a bale of straw under the trees is an idyllic setting for reflection, discussion and forging ties again. My only regret was to have missed a few round tables. Luckily some came to me…

This allowed me to meet people of different ages, driven by various questions. From a geographical point of view, we came from all over France, with a large third, even half of festival-goers from the region, but also a good number from the North, from Nantes… I was impressed by the number of young volunteers who between their mission – in the car park or elsewhere – found the time, as soon as they had a free moment, to come and chat, or listen to a meeting. They want to take full advantage. And then, I enjoyed my discussion with the mayors of Couthures and Marmande. Nice to see how the politicians react when they come here, with the inhabitants…

Of course, as a political comedian, studying how national politicians react and interact interests me. Here, I was able to get a glimpse of how local politicians behave with the inhabitants. I saw the president of the Nouvelle-Aquitaine region, the sub-prefect, the mayor of Bordeaux… It’s also a chance to be able to discuss with Edwy Plenel, Louis Dreyfus, Alain Weil… These are not people I meet, and it’s fun to listen to them from here.

Friday morning, I thought I would go to the first conference just long enough to observe, to spot the places a little. It was “Are there too many of us on the planet?” “, I let myself be captivated and stayed… Yesterday, I listened to “the opinion press and Cnews”, it was fascinating. Like the discussion between Edwy Plenel and Louis Dreyfus on Friday about billionaires and the press. This theme of “media concentration” also fascinated me, it remains a curiosity for me, as a Belgian. And it was interesting to observe the enthusiasm of the public for these workshops.

As a journalist, radio host, I liked the interactions of the public, the questions asked. Many festival-goers are very knowledgeable people, interested in journalism and asking probing questions. All the ingredients for the discussion to go far.

I observed how in a workshop, a festival-goer ventured to hold a conspiratorial half-word. Journalists and moderators did not need to counter or argue, the whole room reacted.

The first Couthura cross, Marcel. He was the one who met me at the station. In the shuttle that took me here, we talked about his job as a farmer, the lack of water, what we grow. He showed me the plantations of kiwis, poplars… For me, the festival started on the station platform.

And then one evening, I had a meeting in the moonlight that ended at midnight. The food stalls at the festival were closing. The local herders who feed everyone during the day shared mojitos with me until 1 a.m. This is also the festival.

In addition to these meetings with Couthures, I am still quite impressed by the public’s interest in the practice of journalism. All year round, we get shouted at… and then, when the festival-goers don’t agree and they have something to say, they simply express it, in a well-argued way.

If I have to give an image of the festival, it is that of the first day: the TER crowded with young people equipped with camping equipment, who are not going to a rock festival but to the journalism festival. It would be nice next year to expand to other students, or to other schools, with a little more diversity. If I have to put a downside, it is this lack of diversity, among the speakers as well as on the side of the festival-goers.