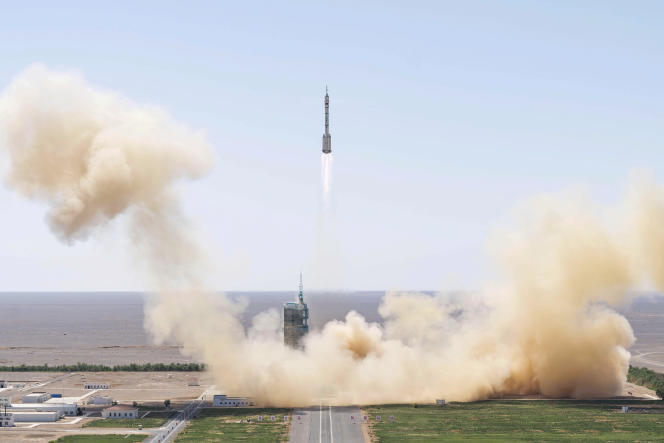 China takes a step further in its project of space conquest. Three astronauts joined, on Sunday June 5, the station that Beijing is building in orbit and which should now be permanently occupied.

The Shenzhou-14 mission spacecraft was powered by a Long March-2F rocket, which took off at 10:44 a.m. (local time, 4:44 a.m. Paris time) from the Jiuquan launch center in the Gobi desert (north -west). Public broadcaster CCTV broadcast images of the launch live. After about “seven hours of flight,” the craft first docked with the space station, CCTV said. Around 8:50 p.m. (Beijing time), the three astronauts finally entered the main module of the station, according to the space agency in charge of manned flights (CMSA).

Like the crew of the Shenzhou-13 mission, which returned in mid-April, the three astronauts are expected to stay on the space station for around six months. Liu Yang, 43, who was the first Chinese woman in space in 2012, is part of the crew. She is accompanied by Chen Dong (43) and Cai Xuzhe (46), who is making her first flight into space after twelve years of preparation.

Station fully operational by the end of 2022

Main challenge for the crew of Shenzhou-14: the reception and installation of two laboratory modules that will dock at the station. They will be launched from Earth in July and October.

When these laboratory modules are installed, the general structure of the station will have its final appearance, T-shaped. It will then be similar in size to the former Russian station Mir, put into orbit in 1986 by the Soviet Union and destroyed in 2001. Its life should be at least ten, even fifteen, years.

Named “Tiangong” in Chinese (“heavenly palace”) but also known by its English acronym CSS (“Chinese space station” in French), it should be fully operational by the end of the year.

The Shenzhou-14 crew will also perform spacewalks, conduct a series of experiments and maintain Tiangong. New for this mission: for the first time, two Chinese crews will pass the baton in orbit in the station. Towards the end of their stay, before returning to Earth, the three Shenzhou-14 astronauts will in fact spend a few days in orbit with their three colleagues from the future Shenzhou-15 mission.

For several decades, China has been investing billions of euros in its space program. It was pushed to build its own station due to its exclusion from the International Space Station (ISS), the United States prohibiting NASA from collaborating with Beijing.

China sent its first astronaut into space in 2003 and has since achieved some remarkable feats. In particular, at the beginning of 2019, it placed a machine on the far side of the Moon, a world first. In 2020, it brought back samples from the Moon and finalized Beidou, its satellite navigation system, a competitor to the American GPS.

In 2021, it landed a small robot on Mars and plans to send people to the Moon by 2030. In the longer term, China plans to offer space tourism, Zhou Jianping said in March. conductor of the Chinese manned program.

News Editor - June 6, 2022 0
They shared the task, a week before the legislative elections: Jordan Bardella in the South, in Cavaillon (Vaucluse), Saturday June 4, Marine Le Pen...

Antiquities trafficking in Iraq: Briton sentenced to 15 years in prison,...

“Readers’ Voices” – Is LGBT Representation in the Media Too Focused...