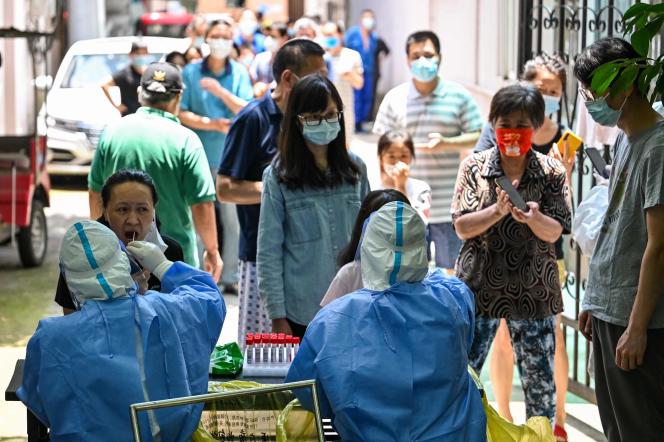 Are the Chinese authorities preparing to reconfine Shanghai? Ten days after the reopening of their city on June 1, the 25 million Shanghainese are again worried. After the discovery of six new cases of Covid-19 on Friday June 10 – including three in a hairdressing salon – the municipality decided to test this weekend the population in, it seems, twelve of the sixteen districts of the town. About 20 million people are affected and half of them will have to be confined during this operation.

It was following a similar systematic screening campaign carried out at the end of March that the city imposed, from April 1, a confinement announced for a period of four days, but which finally lasted for more than two month. However, on March 24, the Chinese press claimed that “Shanghai had no plan to confine the city”. Result: today, the reassuring words of the authorities are no longer audible. On Friday, June 10, Zhao Dandan, number two of Shanghai’s health authorities, “once again urged residents to avoid gatherings.” His announcement had an immediate effect: Shanghainese rushed to supermarkets to stock up.

On June 1, the reopening of the city had not been complete. About 190,000 people remained confined to their homes and 4.5 million were in “controlled areas”. Despite these precautions, thirty-two cases officially appeared in ten days. A number which, in the country of zero Covid, is enough to put the authorities on alert and raise fears of a return to confinement of the population. Because, for the Chinese leaders, there is no question of giving up this radical strategy. Traveling to Sichuan, the President, Xi Jinping, reaffirmed on Friday that it must be pursued in an “unshakable” manner.

Beijing is also enjoying a precarious respite. After a month of semi-containment, the capital reopened “non-essential businesses” on May 30, then, on June 6, cafes and restaurants. Students are expected to return to school on Monday, June 13, after testing negative. But there too, all it took was a few positive cases on Wednesday, June 8, in the nightclubs of the trendy district of Sanlitun, for this district, which is home to many businesses and embassies, to announce the closure of bars and to pass thousands of tests. to a population already tested every seventy-two hours. More than 4,400 contact cases were sent to quarantine, and the bars closed again. One consequence among others: due to students qualified as “indirect contact cases”, the French school in Beijing will not reopen its doors as planned on June 13.

To implement this policy of early detection of the slightest positive case, Beijing requires that Chinese living in the city have a test station less than fifteen minutes away on foot. Almost everywhere in the country there are kiosks equipped with four portholes, two for the person collecting the data, two for the one carrying out the test. According to the Japanese agency Nomura, this policy is extremely expensive. Screening half the population every three days is an expenditure equivalent to 0.9% of GDP and screening 90% of the population every two days is 2.3% of GDP – more than the defense budget. The Chinese online newspaper Sixth Tone made a calculation including simply the purchase of kiosks, the hiring of staff, the cost of equipment. Result: Testing the population of the country’s largest cities of 317 million every two days costs around 12 billion euros per year, without taking into account the processing of test results (the price of which is not public) or the establishment of quarantine centres. Not only do cities have to permanently mobilize about 30% of their medical personnel, but they recruit thousands of other employees to help them. In some Chinese cities, the budget allocated to anti-Covid tests already exceeds the health budget.