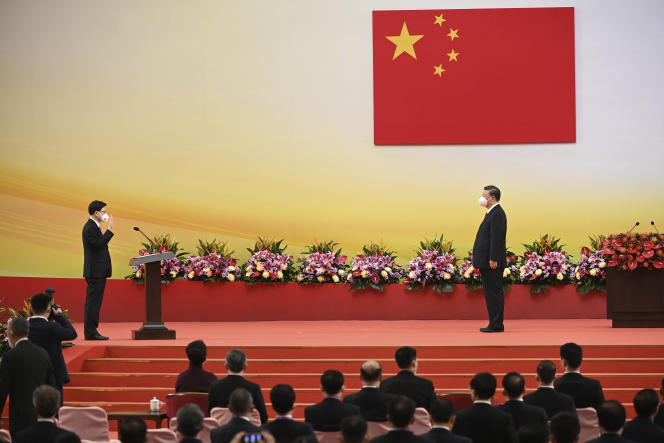 To welcome the emissaries from mainland China, all the partitions of Kowloon West station, north of Hong Kong, had been lined, Thursday, June 30, with predominantly red and gold posters, celebrating the 25th anniversary of the handover of the former British colony to China. Chinese President Xi Jinping, who was stepping out of mainland China for the first time since the pandemic began, assured residents that “real democracy” had finally begun for them.

“After reunification with the motherland, Hong Kong people have become masters of their own city,” he said. An assertion that is sure to make defenders of democracy wince, after three years of a takeover of the territory by the Chinese authorities, which has severely reduced civil liberties.

The Chinese number one left Friday, around noon, after inspecting the Chinese troops stationed in Hong Kong and having installed the 6th government of Hong Kong, led by John Lee, a policeman by profession, who had led the suppression of the demonstrations in 2019. In his final speech, he expressed his commitment to the principle of “one country, two systems”, “a system that has been tested over the years, many times over and that there is no reason to change and that it must be preserved for the long term”. Words that confirm what many analysts and observers already thought: namely that the 2047 deadline will probably not or no longer mark the end of this principle summarizing the spirit of relations between Beijing and Hong Kong.

And for good reason: the communist regime did not wait for the fifty-year period promised before the handover of 1997 to impose drastic changes on the former British colony. Xi Jinping also recalled the role played by Hong Kong in the development of the “motherland” and hailed “its strength drawn from its great freedom and its compatibility with international rules”. In other words, Hong Kong must continue to fulfill its function as an international financial center. Pioneered by Deng Xiaoping, the “one country, two systems” concept was described as “a stroke of genius” by British Prime Minister Margaret Thatcher in the early 1980s during negotiations between the United Kingdom and the People’s Republic of China, with a view to the handover of Hong Kong.

The special administrative region is halfway through the fifty years in which Deng Xiaoping promised that “nothing would change, neither horse racing nor dancing parties”. But the specificity of Hong Kong went beyond entertainment. In three years, the territory has suffered a virulent reconfiguration of its institutions, on a unilateral Chinese decision. With the entry into force of the national security law, exactly two years ago, civil society was “purged” of all potentially critical or dissenting forces (press, unions, NGOs, etc.). The new electoral code imposed in the spring of 2021 purged the political scene of any pro-democracy opposition. Most of its most popular representatives are now in prison. The Parliament (Legislative Council, LegCo) is now only composed of patriots loyal to Beijing.

Before this speech, the 1,300 handpicked guests had attended, in an almost religious atmosphere, the soothing spectacle of the government’s induction ceremony, during which dozens of government members were sworn in, then paraded, twice, to greet, from a distance, first President Xi and John Lee, then the new Chief Executive alone: ​​nod, bow, three fingertips of applause, salute in front of the room, and next.

Until he arrived from Shenzhen around 3 p.m. Thursday, little was known of Xi’s itinerary or schedule. On the underground platform of Kowloon West Station and in the large arrival hall, hundreds of volunteers had been arranged in neat rows to embody Hong Kong’s joy at welcoming the Chinese president. They mechanically waved small Chinese and Hong Kong flags, while loudly wishing a “warm welcome” to President Xi, a very “continental” choreography, quite unusual in Hong Kong. Then the screams died down to let the marching band kick off the dance of a few dragons, candy pink, canary yellow, bright red or turquoise, who waddled and reared up, blinking their eyelashes as they should . No one shook hands with anyone, just nods, any smiles remained masked.

The health context gave this visit a particular character, because China continues to advocate the zero Covid strategy and considers the virus as a scourge to be contained as closely as possible, for lack of being able to eliminate it completely. However, Hong Kong is currently the most contaminated region in all of China (with more than two thousand cases per day compared to twenty in the rest of China), and life there is nevertheless almost normal. The “health risk” taken by the president by going to Hong Kong is therefore, according to several observers interviewed by Le Monde, a sign suggesting a possible change in Chinese policy in this area.

On his arrival, the president had sent a somewhat ambiguous message of compassion to the inhabitants of the territory: “During the five springs and five autumns that have passed since my previous trip, I have followed Hong Kong closely. My heart has always been with Hong Kong and beat in unison with those of Hong Kong patriots. He then referred to the “severe hardships that Hong Kong has had to face in recent years”, referring, without naming them, to the 2019 riots, which were of unprecedented violence for half a century, and to the Covid-19 epidemic, the fifth wave of which was a disaster. But Mr. Xi nevertheless considered that Hong Kong had known how to “extract itself from the fire and be reborn from its ashes”, a reference to the transformations imposed by Beijing to impose order.

Several journalists, local and foreign, who had been invited to cover the events and had submitted to the very restrictive health requirements imposed by the government, were finally rejected at the last minute, the authorities having changed their minds about the reliability of these journalists. Many diplomats present in Hong Kong did not attend the ceremonies either.

This visit was all the more important as it was almost considered due, in a context of extremely formatted bilateral relations. Every five years, with each change of government, the Chinese president pays the honor of a visit to his small “special administrative region”.

President Hu Jintao was briefly interrupted in his official address in 2012 by a guest who barely had time to chant a political slogan or two. Five years later, in 2017, amid increasingly tense social conditions, after the “umbrella movement” of 2014, Xi delivered his famous “red line” speech. A speech with threatening accents for anyone who ventures to cross that line. At the time, the concept, not very explicit, had seemed abstract. It was not until three years later, when the national security law was imposed on Hong Kong on June 30, 2020, that it became somewhat clearer. This new law, which imposes extremely heavy penalties on four crimes against national security, gave its real name to the “red line”.

Hard to find in the city or online any spontaneous sign of “Hong Kong’s jubilation on this festive day”, described by various Chinese official newspapers. On Thursday night, discussions on social media in Hong Kong were dominated by traffic jams caused by the movement of the fifty-car presidential motorcade through the city, as well as the president’s choice to travel in an armored Hongqi. The most high-end version of the Chinese brand, which was fashionable in China in the Mao years and which Xi Jinping has brought up to date. Hong Kongers have also commented a lot on the Chinese president’s choice to return to Shenzhen, on the other side of the border with mainland China to spend the night there. This decision, unexplained, was perceived as impolite by the inhabitants.

As for the practical implications of the words spoken by Mr. Xi during this trip, the liaison office, which is the highest political representation of Beijing in Hong Kong, organized a seminar on Friday afternoon to study them and propose the best possible interpretations.